HOW AWFUL! Ivanka Trump and Jared Kushner Look Sick As Elites Pile on Their Father at McCain Funeral

HOW AWFUL! Ivanka Trump and Jared Kushner Look Sick As Elites Pile on Their Father at McCain Funeral

John McCain was eulogized today at a memorial in Washington DC.

The funeral service was also an opportunity for the Washington DC elites to rip and trash the sitting president — who was told not to come by John McCain.

Speaker after speaker, from Meghan McCain, to George W. Bush, to Barack Obama took turns to rip President Trump in words of anger.

Ivanka Trump and Jared Kushner were in attendance.
They looked sad and embarrassed at the nonstop abuse. 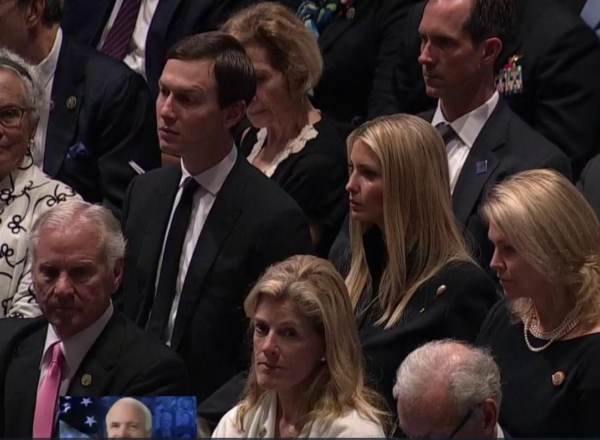 This was a horrific display by the DC elites.

Damn! We’re only two eulogies into the #McCainfuneral, and I keep wondering how Jarvanka haven’t yet slinked out of their seats and crawled on their hands and knees out of that church.

Other liberals and DC elites were outraged that Jared and Ivanka would be at the event.

It’s even better when you remember that Ivanka and Jared are sitting there taking it all.

I hope Ivanka and Jared were squirmingly uncomfortable during Meghan’s eulogy.