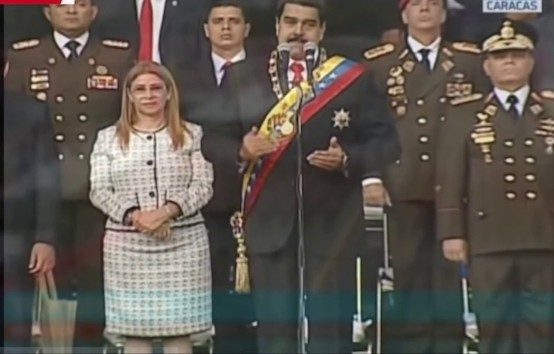 Venezuelan president Maduro and his wife right before a DIY drone attack on August 4. (You Tube)

The failed assassination of Venezuelan President Nicolás Maduro is a game changer.

The August 4th attack was the first known attempt to assassinate a head of state with a drone. It will not be the last. There will be more of these kinds of attacks, and some of them may hit their mark.

Much of the commentary following the drone attack on Maduro focused on how it demonstrated the weakness of his government. While this may be true, the attempted assassination by drone is not necessarily evidence of this fact. Even the strongest and best resourced governments and militaries may soon be struggling to prevent attacks by DIY unmanned transport on both their leadership and the public.

It remains unclear who carried out the attack on Maduro. However, the Venezuelan government has arrested six individuals and has accused a wealthy Venezuelan businessman living in Miami of financing it. Furthermore, it’s clear that those who targeted Maduro used two commercially available drones manufactured by DJI that had been modified to carry C4 plastic explosives. The $5,000 professional-grade drones can carry a 13-pound payload and have a range of three miles.

The first of the two drones used in the attempted assassination exploded above a parade ground less than 100 yards from where Maduro was speaking. In a video of the attack, Maduro, his wife, and the military brass standing around him look up as the drone comes into view. Moments later, the explosion can be heard. A second drone exploded three blocks away from the parade ground. Seven soldiers were injured in the attack.

It is unclear why the drones failed to get any closer to the president. The Venezuelan security services may have been using anti-drone technology, but the first one did get within a hundred yards of the president. Video of the first explosion shows that Maduro’s security detail is slow to react even after the drone is spotted. It is only after the explosion that his bodyguards surround him. This may point to a lack of preparedness on the part of his security detail, but it also highlights a growing problem with drones: they are becoming more and more common in urban areas and are increasingly used by media companies to capture aerial footage. They may have not assumed cause for alarm, at least not at first.

Small off-the-shelf drones can now be seen flying around many cities and parks. Some belong to enthusiasts which run the gamut from children with a new toy to men and women who spend thousands of dollars on fast and nimble technology. Others, some of which are very similar to the drones used to target Maduro, are operated by local police, fire departments, and other emergency response services as well as many commercial enterprises. And soon, there will be drones delivering packages, fast food, and even medicines. In a few years drones may well be ubiquitous in the skies above major cities where they will carry out a multiplicity of tasks. Far more than now, they will go unnoticed by the public.

As these flying machines become a part of our everyday lives they will also become more of a threat. With what is likely to be hundreds if not thousands of drones in the skies above major cities, the opportunities for terrorists and militants to make use of them will only increase.

Even the most secure and advanced can be hacked, as was demonstrated by the Iranians hacking one of the United States’ most advanced and stealthy drones—which was then top-secret and called RQ-170—in December 2011. The Iranians hacked the drone’s GPS signal and then landed it in Iran. Commercial, private, and emergency response drones are unlikely to be as secure as those drones used by the U.S. government. Many of these could easily be targeted by hackers and used to carry out acts of terrorism.

Apart from the danger from hackers, the idea that drones will become “normal” is a real fear. It will be very hard for individuals and government security services to distinguish between the drone dropping off a package and one that is dropping a bomb. A hacked or modified drone can easily join other drones in what drone manufacturers are calling “drone corridors.” These corridors will be highways in the sky for what will be a dizzying array of drones designed to carry out different tasks. How will these corridors be patrolled? How will these drones be secured against hacking? How will governments begin to deal with threats from drones that already range from the size of insects to small aircraft?

Drone technology, and more importantly, the artificial intelligence that drives them are both developing at such a pace that what is state of the art today will be outdated within a year. The drones that were used to target Maduro are primitive compared with what will soon be on the market. Yet, one of them came very close to injuring, if not killing, a head of state. The two drones used in the attack on Maduro required controllers, were not stealthy, and had limited range. In the near future, commercially available drones will not suffer from any of these limitations.

In response to the attack on Maduro, Irish authorities charged with protecting Pope Francis during his recent visit to Ireland raced to deploy the latest anti-drone technology to protect the pontiff from aerial threats. Just as drone technology is developing at a breakneck pace so is the technology that prevents them from being used to carry out attacks. However, this is a race that will likely be lost as drones become far more common, faster, and ever more capable thanks to the artificial intelligence that will guide them.

Michael Horton is a foreign policy analyst who has written for numerous publications including Intelligence Review, West Point CTC Sentinel, The Economist, The National Interest, and The Christian Science Monitor.