Axios: Omarosa taped almost every conversation she had in the White House 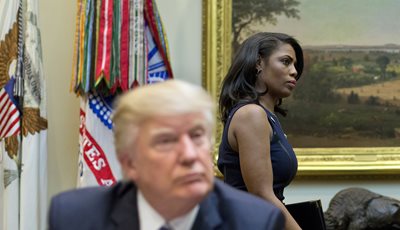 It couldn’t have been this easy to capture conversations in the White House, could it? Could it? Apparently it was for Omarosa Manigault Newman, whose exit from Donald Trump’s inner circle made headlines last year, and who used those recordings to publish Unhinged, her inside look at the administration. Axios’ Alayna Treene reports that Omarosa has a lot more recordings in reserve, although one has to wonder just how much of a threat that is:

Omarosa taped nearly every conversation she had while working in the White House, including ones with “all of the Trumps,” a source who watched her make many of the tapes tells Axios. Omarosa did this with a personal phone, almost always on record mode. …

That’s … pretty low-tech, really, for bugging high-level conversations. One might have expected a necessity for more James Bond-ish methods of bugging. This sounds more like how we used to make mix tapes back in the days of cassette decks and top-40 AM radio. All that’s missing is the DJ’s voice bookending “Undercover Angel” by Alan O’Day. (Don’t @ me, man.)

As Treene later notes, chief of staff John Kelly belatedly banned personal devices from the White House during operational hours, but the damage was already done — at least with Omarosa. It’s a measure of the chaos and inexperience of the first months of the administration that no one apparently thought to crack down on outside devices until Kelly arrived. Even then, he didn’t get around to it until months later, although CNN reported at the time that he’d been thinking about it since he arrived the previous summer.

So why did Omarosa do all this recording? Er … why do you think?

She admitted to making recordings to protect herself.

“In Trump World, everyone lies. Everyone says one thing one day and they change their story the next day. I wanted to have this type of documentation so that in the event I found myself in this position where, as you said, they’re questioning my credibility, saying they never discussed the N-word tape, they had never heard these accusations, the president had never heard these accusations, when, in fact, this tape proves that they discussed it at high levels of the Trump campaign,” she said.

That’s certainly one reason; the big publishing payday was undoubtedly another. That didn’t play out as well as the publisher must have hoped, however; Unhinged plunged in second-week sales as the biggest bombshells in the initial release week turned out to be duds. Omarosa has argued that she has more to release, specifically about Trump’s alleged “ties to the Kremlin,” but why not release it in the book? Why wait until now to discuss that kind of “dirt,” when it could have fueled sales of Unhinged by including it?

Perhaps she really does have more, but at least for now, it looks like the White House dodged a bullet with Omarosa’s low-tech bugging. The question will be how many others have similar mix tapes playing in their own basements, and how long it will be before more of them come floating out into the media. For all her public drama, Manigault Newman wasn’t exactly a key player in this administration. If others more closely associated with Trump and his inner circle had their smartphones on RECORD while discussing policies and actions, the White House might have more headaches on the way.