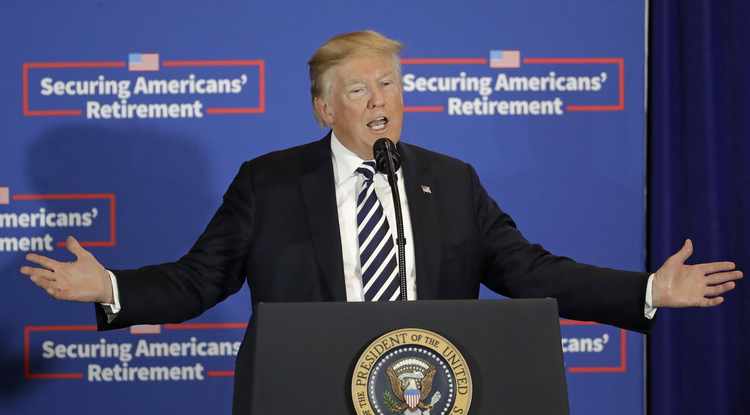 BOSTON — Two Labor Days into Trump’s presidency, what has happened to the working class?

After Election Day 2016, we heard again and again about how Trump had thrilled the those who labor and are heavily burdened, particularly those among them who are white. There was nonstop commentary on just how out of touch citizens in the big and prosperous metropolitan areas had become.

At times, you might have imagined that Trump had been the Marxist candidate running against a creature of Wall Street named Hillary Clinton. Was “Solidarity Forever” about to become the nation’s second anthem?

We don’t hear so much about the working class anymore. We get way more reporting on “Trump’s base,” an overlapping but ultimately quite different group, and how its members will stick with him no matter what. And never mind that in the latest Washington Post/ABC News poll, 60 percent of Americans disapprove of the president. His supporters have assumed an almost magical role in our politics.

One reason class is receding in our public debates: The Trump years have, so far at least, done little for wage earners. Indeed, according to the Bureau of Labor Statistics, real hourly wages overall dropped between July 2017 and July 2018, and they dropped for mid-wage workers, too. This is not at all the “winning” Trump promised.

Nor have the policies of the Trump Administration been focused on the welfare of workers. On the contrary, one of the scammiest parts of Trump’s politics is that he talks like a labor leader but governs like a corporate lobbyist. His tax cut showered benefits on the wealthiest segments of society and produced deficits so massive that Republicans are now proffering cuts in social benefits that go in significant part to — yes, the working class.

A partial exception is Trump’s renegotiation of NAFTA with Mexico. We await all the details, and his freezing out of Canada during the initial round of discussions seemed spiteful. But the provisions in the deal regarding wages and a dispute resolution system that had previously tilted sharply toward the interests of investors do appear to be real improvements from the perspective of workers.

Perhaps only a Republican president could get away with this; we will see what GOP congressional leaders, so indulgent of Trump on his abuses of power, will make of propositions they would denounce as “socialist” if a Democrat were in the White House.

There was always a false element in Trump’s common-man appeal. (The gender reference in that sentence is not an accident.) Limiting the working class with the adjective “white” is a large part of it.

The core of Trump’s ideology, such as it is, has never been about class; his passion has always been for race, culture and immigration. Many post-election studies suggested that Trump’s voters were much more energized by these issues than by economics. Watch the typical Trump stump speech and you will find that fear-mongering smothers any uplift and that falsehoods about immigrants outnumber truths about the challenges to middle-class living standards.

Any politician who is serious about the working class needs to think about it whole — which means remembering how many wage-earners are African-American and Latino. They have been hit as hard by de-industrialization as white workers, and in many places, harder.

Yes, attention must be paid to white workers whose living standards have stagnated or worsened. But attention must also be paid to the country’s racial wage gap. As David Cooper noted earlier this summer in an analysis for the Economic Policy Institute, while 8.6 percent of white workers were paid poverty wages in 2017, the figures were 19.2 percent for Hispanic workers and 14.3 percent for African-American workers.

Broadly shared economic growth is not a cure-all for our social tensions, but it would surely ease them, and it needs to reach across the lines of both class and race.

The fact that Trumpism is not solving the problems it claimed it would does not mean that we should forget the lessons we were supposed to learn from his election.

Wide disparities in regional growth, not only between states but also within them, aggravate the already profound divisions that ail us. Radically uneven economic fortunes damage individuals and families. But they can also destroy whole communities, engulfing them in vicious cycles as local institutions, from churches to unions to civic groups, are hollowed out.

Labor Day celebrates the power of collective action in defense of the dignity of work. Alas, Trump has made such efforts more urgent, not less.