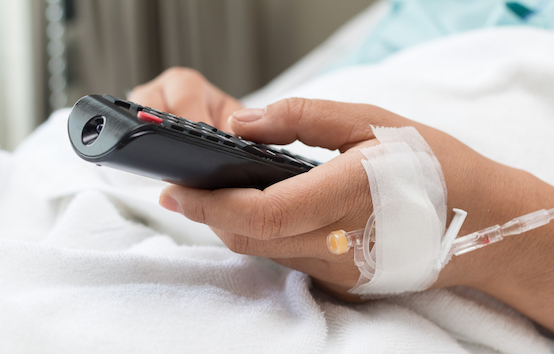 Take the Red Pill some say, see the world as it is. No, the Blue Pill, stay comfortably numb in the Matrix. Well, I had some sweet yellow ones during a week flat on my back in the hospital with little to do but watch TV news. Mainstream media, the stuff I otherwise never watch. I learned as long as you don’t change channels, everything makes sense. At least until a very nice nurse brought those little yellow pills every four hours, which made me lose track. She usually switched channels for me at the same time, like shifting my bottom around to avoid bed sores. That’s where things got confusing.

Who are we counting on to save America? Is it the porn star trying to revive her career, the lawyer who lied for years now trying to save himself hinting outside of court he knows something, or the editor of The National Enquirer who literally invented fake news for the late 20th century? Through my pharmacological haze, it was difficult to grasp how quickly the media flipped their opinions when a person told us what we wanted to hear—who would have imagined Omarosa on CNN to “bring down Trump?” She went from being Uncle Tom to the star of BlacKkKlansman before I was allowed to use the toilet without a nurse present. It’s almost as if we all vaguely recall out of a little yellow pill haze we weren’t at war last week with Eurasia when the news has made clear we have always been at war with Eurasia.

And did you know Trump’s taxes are locked in the vault at Gringotts? It wasn’t “news” but several channels featured tax return stories anyway. As best I could tell no one on TV seemed to know the IRS has all of Trump’s taxes, has audited him many times, and that his tax records are and always have been available by warrant to law enforcement. They appear unaware Trump’s taxes are in fact an open book, albeit one they personally can’t check out of the hospital library. They are certain a bunch of 27-year-old Park Slope “journalists” who probably file 1040EZs will find what has been missed over decades by all those professionals. A 1099 from Putin? More after this message and yes, doctor, I agree, my pain does seem worse, better up the dose…

TV says with great certainty the Trump presidency will end very soon; I really didn’t expect it to outlast my hospital stay and was briefly excited there’d be a cheaper health care system before I was discharged. Nearly every channel said we’d entered a new round of “it’s over,” or claimed “tick tock,” or the walls were closing in—Mueller time! There was actually mass-scale wishful thinking for a national tragedy of any sort to hasten this. There was even a race among channels to grow the death toll in Puerto Rico from a year ago, so much so they invented a new thing called “excess deaths.” Who knew?

I learned apparently all Russians making more than minimum wage are oligarchs. And everyone in Russia over 18 is connected to Russian intelligence, and said to be close to Putin. Drug-addled, my brain tried to convince me Russia was a much smaller place than I remembered it as.

Also Cohen was going to flip, and maybe Don, Jr. or even Ivanka to save themselves, just wait. But the main thing that apparently had flipped was the House. I only found out later this actually did not happen, but you’d forgive me for believing it, because while it may have been the fever thinking for me, it all seemed to get more certain as I drifted from the Afternoon Blonde to the Evening Gray of Wolf to Anderson to Cuomo. There was a primary, or maybe just a show of hands among twenty people somewhere, said Maddow, emphasizing I should listen closely because things are moving fast now, THAT IT COULD HAPPEN, meaning DemsWouldTakeHouseImpeachTrumpAbolishICEHangPenceRenameWashingtonDClinton.

As the nurse with the little yellow pills started dropping by less often as I recovered, I started to understand the news was less about reporting what happened and more about creating the image we are on an inevitable path to Trump’s legal collapse, his mental collapse, or impeachment for… something, we’ll figure the details out later, just accept there is a crisis. That’s when I got it: it’s not about information, but persuasion. I wasn’t an audience, I was raw material.

I sort of remembered during the lulls of “ask your doctor about…” prescription medicine commercials that in my non-writing day job I speak with people from the Midwest, and the Middle West and South, people with AOL addresses and landlines, people to whom New York City is as foreign a place as Tokyo. Though I don’t know if they’ll vote Republican or stay home, they will never vote Democrat, at least not the identity politics “socialist” flavor-of-the-month Democrat emerging in 2018. They aren’t racist or hateful people, but they certainly see those problems falling well below the economy when it comes to what matters. And not one believes the Russiagate story in whole. I didn’t see a lot of TV reflecting those voters; actually most of the news I saw was sculpted to say those people matter less all the time. This is all their fault, anyway. I have to remember to let them know.

People on TV don’t seem to care their doomy predictions have not happened even as they still insist they will. It’s kind of like hoping fireworks shot into the night sky, having once popped and sang — Ohhhh! — will somehow do it again even as the sparks die out. Hours of TV make it is clear Trump —the fact that he exists at all—is so central to how the media view the world now they cannot see past their loathing and even briefly remove that loathing from the analytical equation of what’s happening. The media live forever with 2016’s broken heart; it never healed but instead of getting back out there to date they want you to feel the pain, too. Luckily I fell asleep each evening before the late night shows came on or I’d have been moved to the intensive care unit, if not psych.

Facts and assertions and opinions and reports from sources and we heard and according to reports are all jumbled now into the same thing. The burden of proof is turned around and placed on the unprepared viewer, so believing anything but what you’re told makes you the conspiracy theorist. Even with a volume control I could sometimes reach on the bedside table it was too loud to argue against. It became easier and easier to let the drugs slip to the foreground and mistake what I was made to feel for what I wanted to think. What was left, in the words of one songwriter, was only seeing the shadow they intentionally left behind for me to find and follow. Thinking was hard. TV explained things slowly, so I could understand it in the way they wanted me to. It was easy and they wanted to make it easy. It was more like sports, with someone slapping down, dismissing, destroying, devastating, dissing, crushing or owning someone on the other side of an opinion.

I’m back home now, on the mend. The outrages from my hospital stay (Brennan’s security clearance, Cohen’s non-flip, trade war with Mexico, McCain’s flag at half-staff, Sessions/Mueller to be fired) are nearly forgotten. Red pill? Blue pill? I wish I had more of those little yellow pills.

Peter Van Buren, a 24-year State Department veteran, is the author of We Meant Well: How I Helped Lose the Battle for the Hearts and Minds of the Iraqi People and Hooper’s War: A Novel of WWII Japan. He is permanently banned from Federal employment and Twitter.