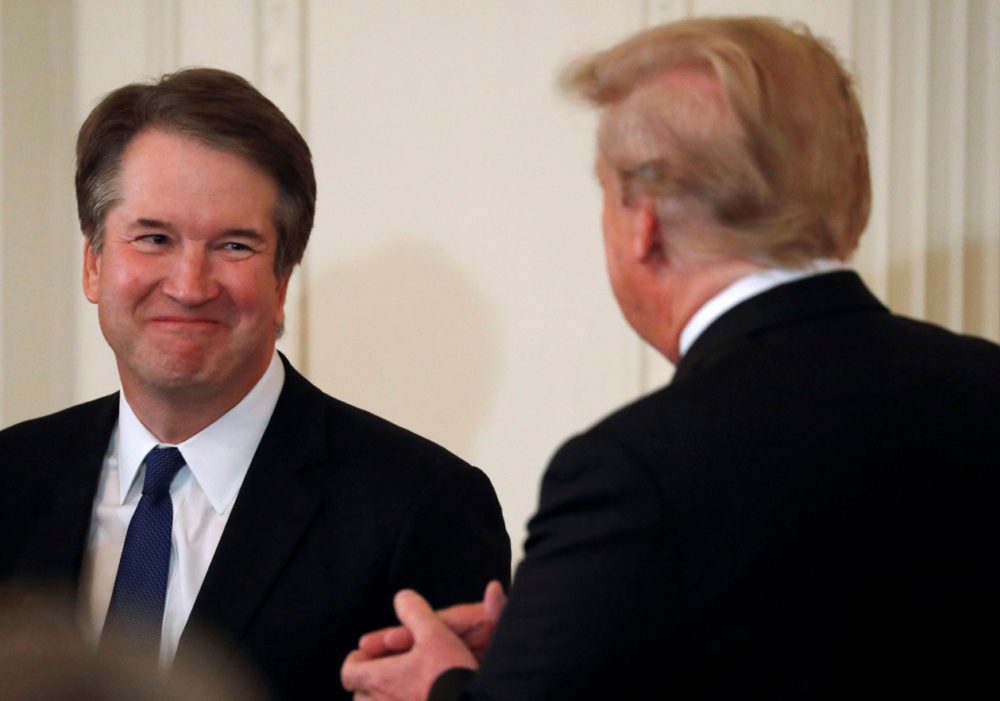 The country’s political establishment gathered in Washington’s National Cathedral on Saturday in a markedly bipartisan and civil memorial service for the late Sen. John McCain. But the next day it was back to business as usual at the establishment’s flagship publication, The New York Times. The paper’s editorial board expressed frustration that Judge Brett Kavanaugh will almost certainly be confirmed to the Supreme Court following Senate hearings on his nomination this week, and complained about the way both Democrat and Republican nominees typically survive what has become a pointless “charade.”

The New York Times thinks it’s a shame that nominees won’t let their hair down for Senate Judiciary Committee inquisitors, but instead carefully dodge questions about their personal views on legal principles or issues that may eventually have to be decided by the high court. But while the paper’s editorial board is correct when it traces this reluctance back to the 1987 confirmation hearings of Judge Robert Bork, in doing so, it attempts to rewrite history in a fashion that speaks volumes about why bipartisanship and civility died a gruesome death long before President Donald Trump arrived on the scene.

The primary lament from the editorial board about the confirmation process is that the chances of defeating Kavanaugh appear to be nil. Nothing short of a “direct meteor strike” will stop Kavanaugh from taking his place on the bench when it resumes work next month, the board notes. The culprit is named as “lockstep partisan behavior” in which senators’ attitudes about the nominee are strictly a matter of party labels, with the exception of some red state Democrats who break party discipline.

The editors assert the conservative positions Kavanaugh is expected to take on the court will outrage minorities, women and workers, and give a green light to polluters and the wealthy to rape, loot and pillage the republic. Clearly, they don’t believe the big issues of the day are up for debate among reasonable people. The board also asserts that Senate Republicans aren’t even pretending to “do their duty” to vet the veteran appellate court justice, because they are denying Democrats the ability to go on a limitless fishing expedition for some offensive sentiment uttered or written during the course of Kavanaugh’s long public career, including service in the George W. Bush White House.

And, like the rest of the indictment of the impeccably credentialed Kavanaugh, the claim he should recuse himself from cases that involve Trump is nothing more than partisanship on the part of the board, which would never apply the same standard to anyone put forward by a Democrat president.

The prospect of a reliably conservative majority on the court if Kavanaugh replaces the often-inconsistent Justice Anthony Kennedy is intolerable to liberals. In that sense, their desire for hearings that would be an ideological Armageddon is understandable. But this call for “honesty” rather than a ritualized sham centers on a claim that the process can work if liberals use it properly. Astonishingly, the editorial board cites the battle over Bork as the example of what happens when the process works. This is shameless revisionism that shows the board’s definition of civility consists of conservatives playing by the Marquess of Queensbury rules, while the left engages in reckless partisan slander.

The editorial was correct in stating that, in contrast to subsequent nominees, Bork was candid about his views during his hearings. According to this version of history, the American people “rejected this vision as regressive and extreme.” But the debate about Bork provided nothing of the kind. It was instead characterized by shameless distortions on the part of Democrats out to demonize Bork.

The late Sen. Ted Kennedy led the charge against Bork, earning infamy with a speech that — although he is often depicted as a “Lion of the Senate” that worked with his Republican colleagues — set a standard for incivility and false and unfair abuse of opponents that not even the most vulgar Trump tweet has yet exceeded:

Robert Bork’s America is a land in which women would be forced into back-alley abortions, blacks would sit at segregated lunch counters, rogue police could break down citizens’ doors in midnight raids, and schoolchildren could not be taught about evolution, writers and artists could be censored at the whim of the Government, and the doors of the Federal courts would be shut on the fingers of millions of citizens.

Of course, nothing in Bork’s “candid” hearing testimony backed up Kennedy’s slander. His talk of the court’s work being “an intellectual feast” to which he looked forward was considered insufficiently obsequious. But his willingness to get into the weeds with Democratic inquisitors on the issues didn’t actually provide the sound bites his opponents wanted. Instead, it was Kennedy’s speech and that helped create the pressure that mobilized Democrats and a handful of liberal Republicans like Arlen Specter and Lowell Weicker to defeat Bork.

It’s also instructive to remember the decision of Democrats to politicize the Bork nomination was not anticipated. Up until the 1950s, hearings for Supreme Court nominees were virtually unknown. Even in the 1980s, the notion that liberals would automatically oppose the confirmation of a conservative judge and vice versa was not something either senators or pundits assumed.

The year prior to the Bork nomination, then-Sen. Joe Biden — the ranking Democrat on the Judiciary Committee — had said publicly he found it hard to imagine voting against Bork: “Say the administration sends up Bork and, after our investigations, he looks a lot like [Justice Antonin] Scalia. I’d have to vote for him, and if the [special-interest] groups tear me apart, that’s the medicine I’ll have to take.”

Of course, Bork’s views and qualifications were more or less identical to those of Scalia, who, in the absence of an ethical scandal (the only factor previously considered a reason to vote against a Supreme Court nominee) had been confirmed by a unanimous vote. But when the Democrats won control of the Senate in the 1986 midterms and the future vice president was elevated to the post of chairman of the Judiciary Committee, Biden’s bipartisan spirit vanished and his party converted a distinguished jurist’s name from a noun into a verb.

As a result, subsequent Supreme Court nominees have chosen to be as close-lipped as possible in their discussions about the issues. Though the editorial board chose not to mention it, the standard is now known as the “Ginsburg rule” after Justice Ruth Bader Ginsburg’s adamant insistence on remaining silent on anything pertaining to an issue that could someday come before the court. At the time, liberals (including Biden, who warned fellow senators that Ginsburg need not be pressed about a lifetime of judicial advocacy) thought it was fine since it helped her win confirmation by a 93-3 margin.

The New York Times is right that Democrats will likely resort to the same tactics used by Republicans when they are back in control of the presidency and the Senate. It was, after all, then-Senate Majority Leader Harry Reid who began the dismantling of the filibuster of judicial nominees in order to ram through the confirmation of President Obama’s choices. But we needn’t look to the Senate for proof of liberal hypocrisy on this process, since the paper opposed the filibuster when it was the tool of a Republican minority, but then shamelessly flipped and backed it when the GOP won back the Senate.

The idea that either major party has a monopoly on virtue with respect to the court is a myth. But anyone who doesn’t like what the confirmation process has become would do well to remember that it was Kennedy and Biden who began the slide down the slippery slope with the smearing of Bork. Up until then, the process “worked” for both conservatives and liberals, because ideology was not considered a good reason to oppose a judicial nominee.

The New York Times and those for whom it speaks may well be nostalgic for a time when their stranglehold on the national media (before the internet and the creation of conservative outlets) made it easier to get away with such smears. But they’re wrong if they think the country is hungry for a Borking of Kavanaugh, or that they can claim that such disgusting partisan antics can be credibly represented as being in the nation’s interests, or to uphold mythical pre-Trump standards of civility.