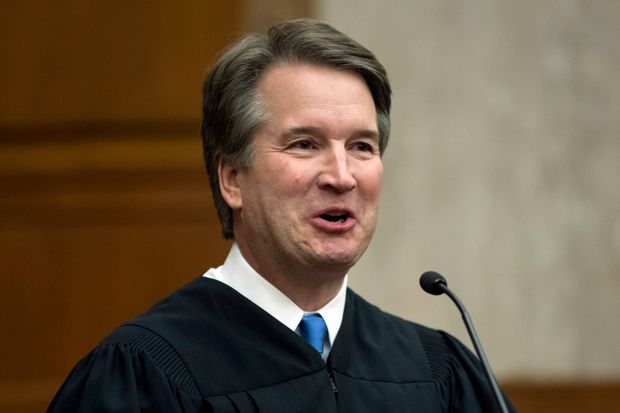 America is about to get its first extended look at Supreme Court nominee Brett Kavanaugh in his confirmation hearing before the Senate Judiciary Committee.

The Senate Judiciary Committee opens confirmation hearings for Supreme Court nominee Brett Kavanaugh on Tuesday, and don’t expect the “bipartisanship” that everyone extolled at John McCain’s memorial services last week. Democrats are out to tarnish the nominee even if they fail to defeat him, and the main goal is to drive voters to the polls to elect a Democratic Congress in November.

Toward that end, you will hear that the 53-year-old judge will join four other conservatives on the High Court eager to eviscerate the rights of Americans. You will hear they want to require back-alley abortions, deny contraception to women, end gay marriage, strip voting rights from minorities, empower corporations to crush workers, and remove constitutional checks and balances on Donald Trump so he can reign supreme.

Have we missed anything?

The hyperbole of the attacks is self-refuting. No Court with Chief Justice John Roberts as the swing vote is going to overturn precedents willy-nilly, even if an originalist interpretation of the Constitution suggests that it should. The Court has other things to consider, such as how deeply precedents have become embedded in law and social practice.

A classic example is the Miranda warning when police arrest a criminal suspect. Justice William Rehnquist was a critic of that 1966 decision, but in 2000 he refused a chance to overturn the ruling because the warning had been universally in use for so long. Likewise, a conservative Court will not overturn thousands of legal same-sex marriages.

The real reason Democrats are furious about a Court with five conservatives is that it may no longer be an engine of progressive policy. If liberals want to guarantee a minimum income or a right to suicide, they will have to persuade voters and pass it democratically. No longer will five or six Justices be able to find such rights in the “penumbras” and “emanations” of the Constitution.

Or at least that is our hope. No one can know how a Supreme Court Justice will rule, and some Justices change as the decades go by. Sandra Day O’Connor began as a conservative but moved left over the years on race and other issues. Some conservatives fear that Judge Kavanaugh, as a denizen of the Beltway, will also be pulled left by the forces of liberal social conformity.

He will suddenly have a new set of courtiers, and the media will treat him like one of B.F. Skinner’s pigeons. They’ll assail him as they now do Justices Clarence Thomas or Samuel Alito when he rules the way they dislike, while rewarding him as they did former Justices Anthony Kennedy and O’Connor if he moves their way. Judge Laurence Silberman on the D.C. Circuit Court of Appeals calls this “the Greenhouse effect,” after a liberal reporter who covered the Court.

Our sense from reading Judge Kavanaugh’s essays and opinions—he wrote more than 300 on the D.C. Circuit—is that he has the personal and constitutional grounding to stand up to such hazing. There is also now enough of a conservative counterculture in the Federalist Society and courts that he will get some reinforcement for originalist rulings.

On this point, one question is what Judge Kavanaugh thinks about issues that divide legal conservatives these days. Is he closer to J. Harvie Wilkinson of the Fourth Circuit who roundly criticized the Heller gun-rights ruling as conservative activism? Or is he more like Justice Thomas in a willingness to revisit doctrines that prevailed before the era of liberal judicial activism of the 1960s? GOP Senators might try to elicit some insight from Judge Kavanaugh on these questions this week.

By the way, readers can ignore the Democratic protests about the GOP failure to produce more documents from Judge Kavanaugh’s tenure in George W. Bush’s White House counsel’s office. The Trump Administration decided to withhold some 101,000 document pages entirely under executive privilege and allow Senators and their staff to view 147,000 or so in a secure room on Capitol Hill.

Minnesota Senator Amy Klobuchar said Sunday that this is “not normal.” She must be running for President, because the process is similar to how the Obama White House handled documents related to Elena Kagan. We’re told no Democratic Senators had bothered to look at the documents by Monday. Judiciary Chairman Chuck Grassley also said he’d support Senator Klobuchar’s request to make some of those documents public if she wishes. She has not done so—which suggests how little of political consequence is in those pages.

As long as Republicans stay united, they can confirm Judge Kavanaugh without a Democratic vote. But if it looks as if confirmation is assured, don’t be surprised if Minority Leader Chuck Schumer gives a pass to some of the Democrats running for re-election in conservative states this year. Mr. Schumer wants to show he is fighting as hard as possible to defeat Judge Kavanaugh, but he wants to be Majority Leader even more.