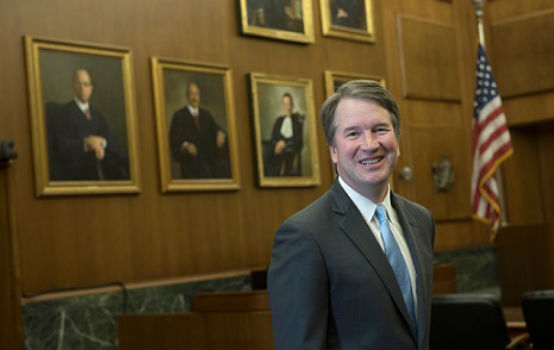 One of the strangest charges from the Left against Judge Brett Kavanaugh is that his history shows that he will use his position to expand executive power to the detriment of liberty and individual rights and to the benefit of Big Business. At the very outset this argument reflects a bit of hypocrisy in light of the nearly dozen examples of executive overreach by President Barack Obama that were later struck down by the Supreme Court by 9-0 votes.

In fact, Judge Kavanaugh’s opinions illustrate how strongly he views the separation of powers as the best guarantee of individual liberty—values that have been seriously undermined by rulings over the last decade, shifting power from both the courts and Congress to giant (and in some cases still growing) government bureaucracies, most of which are in the executive branch.

These bureaucracies, in turn, have counterintuitively provided sanctuary for Big Business to use as protection against smaller competitors with less cachet and fewer connections. It has long been the goal of the prevailing establishment to create a marriage of sorts between Big Business and Big Government, so that the latter—including both Republican and Democratic—can directly engage with concentrated industries that are much easier to control than thousands of smaller interests. For their part, these industries get enormous government support, preference, and protection against competition.

The basic trigger for this shift has been the so-called Chevron Doctrine, which essentially holds that if a regulatory agency can find any ambiguity in the congressional delegation of authority, it can construe that ambiguity as itself a grant of authority to do almost anything the agency wants to do within the bounds of reason, whether or not Congress ever intended to make such a grant in the first place. This has resulted in the bizarre situation where an agency—which derives its powers from Congress alone—can reverse a court ruling validating another agency’s interpretation of a statute simply by viewing the original delegation as ambiguous and coming up with a different interpretation, leaving Congress out of the loop entirely.

For the first few years after this 1984 ruling, the courts applied the Chevron Doctrine when it was convenient and ignored it when it was not. Justice Antonin Scalia did not generally participate in this shifting of power away from Congress or the courts because he did not always see the ambiguity that the agencies were so eager to discover to expand their own power. But over the last decade the Chevron Doctrine has taken an almost constitutional status as an iron rule of statutory construction. However, the lower courts—led in large part by Justice (then Judge) Neil Gorsuch and Judge Kavanaugh at the 10th Circuit and D.C. Circuit respectively—have begun to raise serious questions about this problem. Justice Clarence Thomas has written a series of strong dissents along the same lines. Indeed, the Supreme Court has already granted review on some of these issues this term.

The incestuous relationship between Big Government and Big Business goes back to the philosophy of the German intellectuals in the late 19th century, through Woodrow Wilson and Franklin Roosevelt up to the present. The idea of turning over our government to elite bureaucratic experts has been around a long time, but flourished as the Obama administration unleashed a torrent of regulatory activity. The tip of the spear was the Chevron Doctrine, which, in the bluntest terms, means the government bureaucracy almost always wins, attracting ever more growing power and leverage over private entities while deep-pocketed and well-represented corporations climb on board.

Judge Kavanaugh’s opposition overlooks this phenomenon and instead cherry picks individual cases in which he appears to side with Big Business against the hapless consumer. But looking at two or three cases ignores the thousands of issues where Chevron has tipped the scales in favor of government, and these cases never get to the Supreme Court. Kavanaugh has written strongly on Chevron as an appellate judge and there is no reason to think this and other related issues won’t eventually come to the High Court. This is why the National Federation of Individual Businesses (NFIB) made the Gorsuch nomination its top priority last year—and why it will be working so hard for Kavanaugh. NFIB correctly sees Chevron as the key to government support for Big Business at the expense of smaller competitors.

What too many people don’t understand is that the Big Business/Big Government tandem is a killer of opportunity and innovation for small business, which creates more than two thirds of all new jobs and has historically served as a feeder of American innovation—from Charles Kettering in his garage before going to General Motors, up to the current crop in Silicon Valley, where startups have blossomed and transformed the modern technology landscape.

Quiet—if not secret—arrangements between business and government for the latter to protect the position of the former, of course, predate even the German progressives. Adam Smith’s biggest nightmare was the capture by special interests of parts of the government to ward off competition. He was not a cheerleader for established business interests and felt that they would always find some way to conspire against the public interest if left unwatched and unpoliced for monopolizing behavior. As a result, Smith advocated for a strong judiciary clearly independent of the executive branch—primarily to protect private property from government compromised by competing interests.

Indeed, Smith once said that “the government of an exclusive company of merchants is, perhaps, the worst of all governments for any country whatever.” He much preferred the product of a competitive—if sometimes unruly—marketplace ruled by the invisible hand of thousands of entrepreneurs to the tidy reality of a giant expert committee. For him the benefit of the invisible hand was that it relieved the government of having to figure everything out with giant immoveable bureaucracies totally incapable of understanding the needs of local communities.

It would therefore be a big mistake to construe Kavanaugh’s views of the separation of powers as somehow a big kiss to corporate interests. The world he will confront if confirmed is one already deeply compromised by crony capitalism, which has hit the middle class hard by the rigidities brought on by freezing market shares and reducing innovation. Just look at the growth unleashed by the Trump administration’s deregulatory efforts today—a program that has already reduced job-killing government uncertainty in the marketplace. It will, of course, be great to see a major overall cut in the size of government, but the economic growth began the day the regulatory spigot was turned off.

Turning off the tap begins with reviewing Chevron, and this Kavanaugh has been doing. In fact he has written so extensively about various problems of the administrative state that it is highly unlikely to be ignored in the near future if he is confirmed. This includes his court of appeals dissent in Free Enterprise Fund v. PCAOB (Public Company Accounting Office Board) case in 2008, which became the basis for the Supreme Court’s majority opinion. In it, Kavanaugh argued that limiting the president’s authority in PCAOB appointments was unconstitutional. Furthermore, he wrote eloquently expanding his views about the appointments clause in a case involving the constitutionality of the Consumer Financial Protection Bureau, some version of which is almost certain to be resolved by the Supreme Court.

Finally, Judge Kavanaugh has been credited with developing the “major issue” exception to the Chevron Doctrine. This exception parallels an exception created some years ago by Justice Scalia, which says that if an ambiguity arises out of an overly vague statute that violates the non-delegation doctrine, the courts (and, emphatically, not the agency) must sort out the answer by construing the meaning of the statute themselves.

The point of all of this is to reduce the size of government, especially the executive branch, not to expand it or increase access to it by Big Business. Many of the tricks used by the previous administration are already being erased by the agencies themselves. It will take a long time to clean the stables thoroughly, but the confirmation of Kavanaugh is certainly a move in the right direction.

What about Big Tech? The tie-in between Big Business and Big Government has not yet matured in connection with Silicon Valley. The European Union has triggered a major new regulatory regime related to privacy, and it may well make U.S. regulation unnecessary. But like the situation described above, the new EU rules may end up doing more to protect Big Tech than to tame it—a problem signaled by Facebook CEO Mark Zuckerberg at his congressional hearings. Google ad revenues apparently rose the day after the rules were put in place.

Resolution of Big Tech dominance, whether under the antitrust laws or otherwise, is not an imminent issue for Kavanaugh and the Supreme Court now, but in time the problem will get there. It’s impossible to predict how it will be sorted out. But some basic principles underlying the Constitution will come into play, such as the role of private property—which Adam Smith and the Scottish Enlightenment viewed as critical to any ordered system of liberty. One of the principal problems with Big Data and privacy protections related to personal information is the huge uncertainty over who really owns the data relating to ourselves. Moreover, if the intellectual property issues are properly addressed, there may be no need for the big bureaucracies that have built up around them.

This issue looms, unresolved, in the great frontier of new legal challenges to greet Judge Kavanaugh if he is approved this fall. There is no one better versed to contribute here, and in the broader sphere of Big Business and Big Government. Rather than an agent for government power, Kavanaugh will serve as a bulwark against cronyism and powerful Washington bureaucracies.