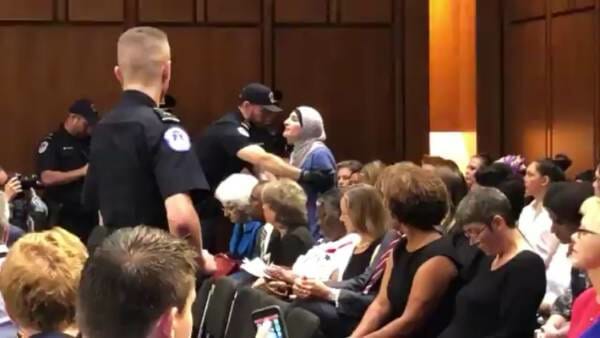 Within minutes into the hearing today leftist protesters started screaming and disrupting the process.

Linda Sarsour, the Sharia law-loving, hijab-clad leader of the Women’s March, was arrested for disorderly conduct at the Kavanaugh hearing.

Women’s March protesters probably don’t even know who they are protesting. The night Trump announced Kavanaugh as his next SCOTUS nominee, the Women’s March sent out a frantic press release to protest Kavanaugh and they forgot to fill in the empty box where his name was supposed to be printed.

Sarsour is very upset with what Brett Kavanaugh may mean to women’s rights.
She was so angry that she started screaming and was tossed from the hearing.
VIDEO:

This was rich.
Sarsour is a devout Muslim. 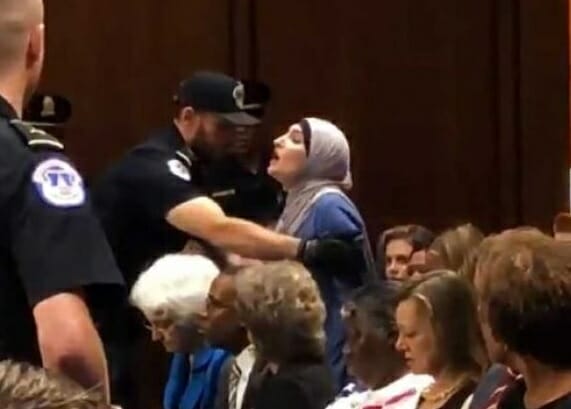 Islam teaches that a woman is worth less than a man. Quran (4:11) – (Inheritance) “The male shall have the equal of the portion of two females” (see also verse 4:176). In Islam, sexism is mathematically established.

Islam allows a man to hit his wife but only if she doesn’t do what he asks.

A Muslim man can divorce his wife by repeating “I divorce you” three times.

Men are in charge of women, according to the words of Muhammad and the Quran.

And a Muslim man can marry as many as four women at a time and have sexual relations with an unspecified number of slaves as well.

If Linda Sarsour is really concerned about women’s rights she should start by protesting her mosque and not Republicans at the US Senate.