How the Elite Took Over Youth Sports, Too 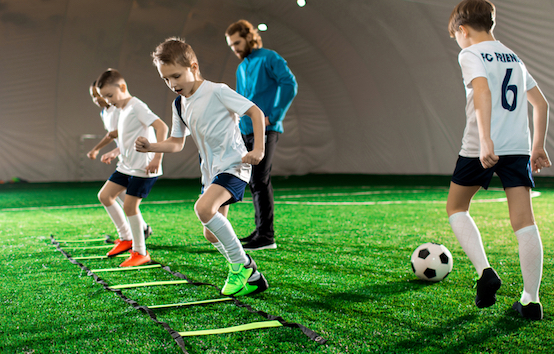 The end of summer means not only back to school, but back to competitive youth sports. Well, sort of—as most parents know, the era of summer pickup neighborhood sports games is now largely absent from American cities and towns. In their place, we now have year-round opportunities for parents to keep their kids in a single sport, preparing them, it’s often argued, for high school and collegiate athletic opportunities. For a number of reasons—including how this trend affects’ kids development, how it weakens community bonds, and how it undermines American religiosity—we should resist this trend towards the professionalization of youth sports.

This summer a few anecdotes reminded me of the “new normal” for children’s activities. The first was the simple realization while driving around Northern Virginia that many of the public fields and parks were largely empty during the summer months. When I was a kid, my friends and I were always trying to scope out new places to play baseball or football. Whenever we weren’t in formal activities like vacation Bible school or music lessons we were traipsing around the neighborhood knocking on doors to rally enough kids to play ball. Now the only fields and parks populated when schools gets out are those claimed by summer leagues or other formal recreational programs, which of course cost money and require parents able to drive their kids around.

This realization was compounded by what I learned when I tried to sell baseball cards a few weeks ago. When I took the thousands of cards owned my me and my father to a local hobby and card shop, the owner mournfully told me that my cards would likely fetch less than $25 (I ultimately sold them online for $20). The store owner explained that two trends explained the remarkable decline in the cost of many baseball cards: the massive overproduction of them in the 1980s and 1990s, and the precipitous decline in youth interest in them. Indeed, the market has now dried up, and comparatively few cards are produced each year. This may not seem directly related to youth athletics, but it shows that few kids are following baseball closely enough to care about cards, which means they also are uninterested in playing the sport themselves.

Alternatively, uber-competitive athletic youth sports teams are the new norm. A 2017 article in Time noted that kids were being “swept up by a youth-sports economy that increasingly resembles the pros at increasingly early ages.” While low-cost “neighborhood Little Leagues, town soccer associations, and church basketball squads” are on the decline, private club teams, including “development academies affiliated with professional sports franchises to regional squads run by moonlighting coaches with little experience” have been on the rise. These sports programs come at a steep cost, some families spending more than 10 percent of their income on registration fees, travel, camps, and equipment. The hyper-competitive nature of these programs is astounding—some basketball analysts now rank the nation’s best kindergarteners!

There are a number of problems with this trend. The first is how it affects how American kids perceive athletics. Sports are increasingly viewed as an activity either for the wealthy or the most athletic kids. This weakens interest in sports for average kids who never have a shot of acquiring a collegiate scholarship or playing in the pros, or whose parents can’t afford expensive leagues. Indeed, athletic participation for kids ages 6 to 12 has dropped almost 10 percent over the last decade, according to The Washington Post. This is bad both for the kids able to play in competitive leagues and those left behind. Children who focus on one sport in the hopes of future stardom are more likely to get injured from overuse, given how much their bodies are still developing. I remember how adamant my baseball coaches were that I never threw a curveball, for exactly this reason. Those who don’t play any sport, meanwhile, are far more likely to become overweight—almost one out of five children is now obese, according to the CDC.

The widening divide between children athletes and and non-athletes also undermines the fabric of American society. Even if some kids truly are on their way to sports success, there was a time when a broad diversity of kids played in youth rec leagues together. These brought all Americans together in a love for the same activity, so memorably portrayed in the movie The Sandlot. This paradigm also strengthened community bonds. Kids were familiar with their peers in the neighborhood, playing in the streets, fields, and parks close to home. Parents inevitably got to know one another better through the interaction of their children. Now, in contrast, parents, particularly in wealthier suburban areas, are too busy carting their kids around to the non-stop grind of various activities to know their neighbors. We know people across town whose kids are on our kids’ travel soccer team, but we don’t know the people next door.

The professionalization of youth sports also weakens American religiosity. Anyone who has either played on a travel league or had their kids play on one knows that many of the games are played on Sunday. When I worked in the tennis world I witnessed plenty of this as a tournament manager—the United States Tennis Association (USTA) youth tournaments I managed were held from Friday evening through Sunday afternoon. If your kid is in the semifinals or finals of such a tournament, you’ll have to find a Saturday afternoon or Sunday evening service to attend, possibly in a faraway town. If your kid is competing a lot, this becomes the norm. Some parents simply choose to skip out on church altogether to make their weekend schedules easier. Even when parents make the effort to get their kids to church, they often show up dressed in their athletic wear. How can such a mentality not undermine honoring the Sabbath as a day of rest, oriented towards the worship of God and building of faith communities?

The prospect of having one’s child “make it” in a sport is of course a huge temptation. Even with my little tennis lessons for my five-year-old daughter I found myself contemplating how I can ensure she sticks with it and gets good enough to get a collegiate scholarship (Title IX has made this a lot easier for female athletes). The answer isn’t necessarily to entirely eschew competitive sports for our kids. But we do need to be prudent and discerning in how hard we push our kids, and how much of their lives (and ours) we’re willing to devote to this type of athletic activity. Our kids, especially when they are elementary age, need opportunities simply to have minimally-supervised fun outside with other children. And we need opportunities for true rest and leisure that doesn’t involve driving all over our counties, states, and regions trying to “keep up with the Joneses.” To that end, I recommend taking your kids outside with a wiffle ball and bat, and just have some fun with them. Maybe some other children, tired of staring at a screen, will come out and make some memories worth preserving.

Casey Chalk is a student at the Notre Dame Graduate School of Theology at Christendom College. He covers religion and other issues for TAC.