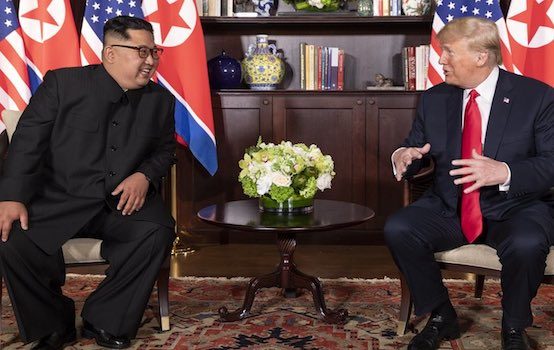 Last Friday, citing “insufficient progress” towards denuclearization, President Donald Trump abruptly canceled Secretary of State Mike Pompeo’s planned trip to North Korea. Many experts are warning that Trump’s failure to obtain concrete agreements from Pyongyang could cause relations to collapse and the threat of war to return. That is an unfounded fear: in fact, the U.S. remains in a stronger position than is commonly acknowledged.

Anyone expecting “concrete results” just two months after the beginning of talks understands little about international diplomacy. And even if the talks don’t completely disarm the North Korean regime, Trump can still keep America safe indefinitely.

Some pundits have viewed the cancelation of the Pompeo meeting in dramatic shades, including one analyst who argued that it “left the diplomatic process on a precipice and took the President closer to a looming decision point on whether to crank up political and military pressure on Kim or to offer concessions to pick the deadlock.” But it is a mistake to believe that these are the only options open to the president. To the contrary, ramping up military pressure on North Korea is not merely unnecessary, it is counterproductive to U.S. interests.

Many believe that America’s objective should be the complete, verifiable, irreversible denuclearization (CVID) of North Korea. Setting CVID as the required outcome, however, sets the U.S. up for almost certain diplomatic failure and could result in a bloody, unnecessary, and potentially catastrophic war.

Instead, Washington should set CVID as a long-term goal, while ensuring the accomplishment of three non-negotiable outcomes: 1) the security of the United States and our vital national interests, 2) the maintenance and expansion of favorable trade relations throughout Asia, and 3) the establishment of peace on the Korean Peninsula. Trying to coerce Kim Jong-un into fully giving up his nuclear arsenal within a short time frame is to guarantee failure, while the pursuit of the alternative three objectives are vital to America and are likely to succeed. Here’s why.

Even a cursory examination of past U.S.-North Korean diplomacy will show that talks are long, frustrating, and filled with dramatic shifts. The negotiations that resulted in the 1953 armistice that ended active hostilities in the Korean War took more than two years of talks, covering 158 meetings. Expecting the sides to agree to a concrete plan and Pyongyang to begin actively disarming after only two months covering a handful of meetings is unrealistic in the extreme.

Entering negotiations, it is a certainty that both sides will seek to obtain the maximum benefit while giving up the least in return. We should have expected from the beginning that the early phase of discussions would be characterized by demands, counter-demands, accusations, and behind-the-scenes posturing while each side probes the other to see how far it can go. No one—not Kim and certainly not Trump—is going to be eager to give up anything unnecessarily.

Moreover, Kim has been hell-bent on developing nuclear weapons and then making them operational since his ascension to power in 2011. The idea that he’s going to relinquish them after one meeting with Trump without receiving anything of substance in return is laughable.

Continuing this diplomatic engagement is unquestionably in America’s interest and we should absolutely work towards the goal of CVID. However, even if it takes many years to secure an ultimate agreement, the president can accomplish the first and second of the three must-have objectives immediately, and with patience, he can accomplish the third over time.

This fact is crucial to understand: the only way the U.S. loses in its interaction with North Korea is if we lose patience and resort to the use of force. Our nuclear and conventional military deterrents are so much stronger than North Korea’s that we can deter them indefinitely.

There is no rational evidence to suggest that Kim would throw away everything he and his forefathers have worked towards in North Korea by using nuclear weapons against the United States. To the contrary, every action Kim has taken since 2011 shows that he craves regime survival above all.

In recent years—and especially in recent months—Kim has invested considerable effort and money in trying to modernize and expand his country’s economic development. He has tried to show the world that he is a statesman by breaking with the traditions of his father and grandfather and actively meeting with foreign heads of state.

All this shows that Kim desires the development of his country. It is irrational to argue that he would throw it all away by using a nuclear weapon that he knows would result in the utter annihilation of himself and his state. Thus, it would be the height of folly to even consider sparking a war of choice against North Korea.

The most logical, rational course of action the United States can pursue—and the one that gives us the best chance to accomplish our objectives—is to engage in diplomacy with North Korea. Those talks, of course, should be backed firmly by unblinking military deterrence.

Daniel L. Davis is a senior fellow for Defense Priorities and a former lieutenant colonel in the U.S. Army. He retired in 2015 after 21 years and four combat deployments, including serving as an advisor for the Second Republic of Korea Army. Follow him on Twitter @DanielLDavis1.