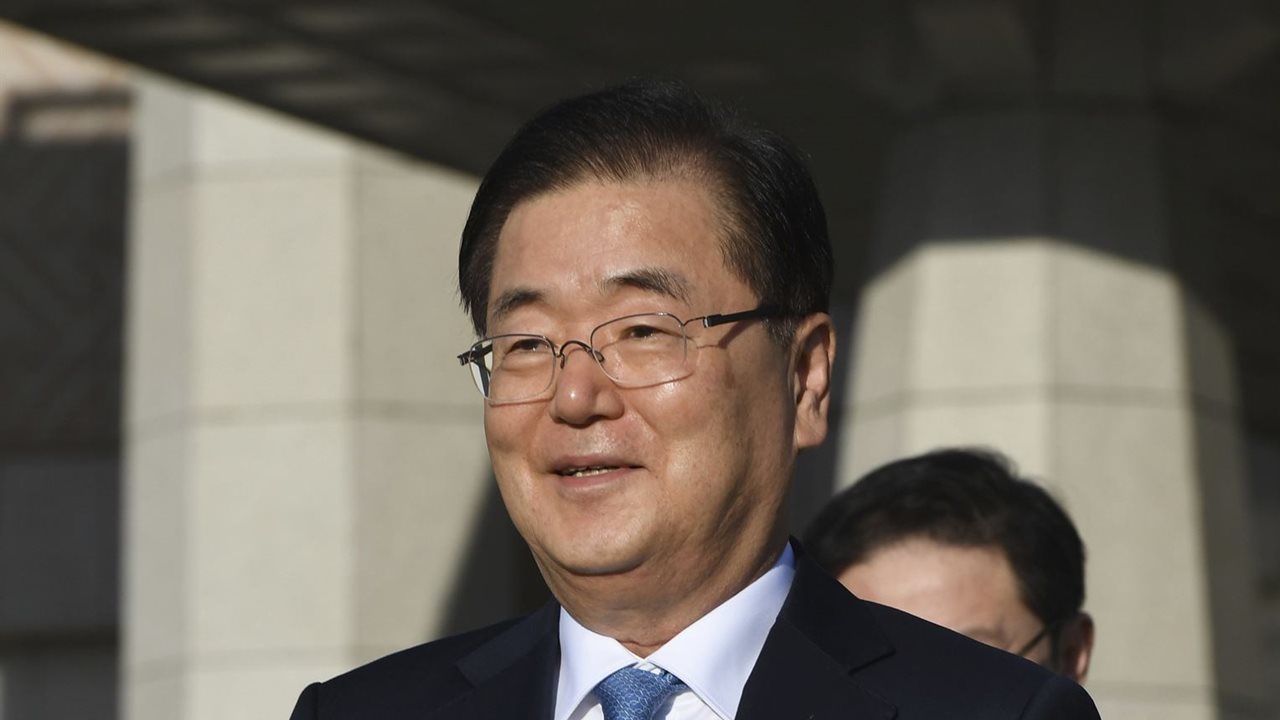 SEOUL, South Korea (AP) — A South Korean delegation met with North Korean leader Kim Jong Un on Wednesday in Pyongyang for talks on arranging a third inter-Korean summit planned for this month and to help rescue faltering nuclear diplomacy between Washington and Pyongyang.

The office of South Korean President Moon Jae-in said the envoys led by his national security adviser delivered his personal letter to Kim and “exchanged opinions” on unspecified issues.

The envoys are planning to fly back to the South after attending a dinner reception hosted by the North. They earlier met Kim Yong Chol, a former spy chief who has been negotiating with the United States on nuclear issues, and Ri Son Gwon, chairman of the North’s agency that handles inter-Korean affairs, at Pyongyang’s Koryo hotel.

South Korean officials said they couldn’t provide further details. Moon’s office is planning to hold a briefing on the visit on Thursday.

Moon, who discussed his plans with President Donald Trump by telephone on Tuesday, said before the trip that his envoys are tasked with a crucial role at a “very important time” that could determine the prospects for lasting peace on the Korean Peninsula.

While pushing ahead with summits and inter-Korean engagement, Seoul is trying to persuade Washington and Pyongyang to proceed with peace and denuclearization processes at the same time so they can overcome a growing dispute over the sequencing of the diplomacy.

Seoul also wants a trilateral summit between the countries, or a four-nation meeting that also includes Beijing, to declare a formal end to the 1950-53 Korean War. The U.N. General Assembly in late September would be an ideal date for Seoul, but many analysts see that possibility as low, considering the complications of the process and how far apart the parties currently are.

U.S. officials have insisted that a peace declaration, which many see as a precursor to the North eventually calling for the removal of all U.S. troops from the Korean Peninsula, cannot come before North Korea takes more concrete action toward abandoning its nukes. Such steps may include providing an account of the components of its nuclear program, allowing outside inspections and giving up a certain number of its nuclear weapons during the early stages of the negotiations.

While an end-of-war declaration wouldn’t imply a legally binding peace treaty, experts say it could create political momentum that would make it easier for the North to steer the discussions toward a peace regime, diplomatic recognition, economic benefits and security concessions.

The North has accused the United States of making “unilateral and gangster-like” demands on denuclearization and holding back on the end-of-war declaration. North Korea’s Foreign Ministry on Tuesday published a lengthy statement on its website saying that an end-of-war declaration would be a necessary trust-building step between the wartime foes that would “manifest the political will to establish the lasting and stable peace regime on the Korean Peninsula.”

“Our government believes that an end-of-war declaration is very much needed while we enter a process toward stabilizing peace in the Korean Peninsula through complete denuclearization,” said Chung Eui-yong, Moon’s national security adviser and the head of the South Korean delegation to Pyongyang, in a news conference on Tuesday.

“We will continue to put in efforts so that an end-of-war declaration can be reached by the end of the year. We are always maintaining close communication with the United States.”

Moon’s five-member delegation, which also includes his top intelligence officer, Suh Hoon, consists of the same group that traveled to Pyongyang in March where they talked and dined with Kim and reached an agreement on the first summit between the Korean leaders in April. The South Korean officials later visited Trump at the White House where they conveyed Kim’s desire for a summit, to which Trump accepted on spot.

After their June summit in Singapore, Trump and Kim announced a vague statement about a nuclear-free peninsula without describing when and how it would occur. Post-summit nuclear negotiations between Washington and Pyongyang got off to a rocky start and quickly settled into a stalemate.

While the United States maintains that efforts to improve relations between the Koreas should move in tandem with efforts to denuclearize the North, Moon has recently said inter-Korean engagement could take the lead.

“If needed, we should pull forward the negotiations for the complete denuclearization of the Korean Peninsula with the development in relations between the South and North,” Chung said.

Any progress could depend on whether Moon’s envoys were able to coax a stronger verbal commitment from North Korea on denuclearization to help put the nuclear talks between the United States and Pyongyang back on track.

Trump called off a planned visit to North Korea by Secretary of State Mike Pompeo last month, citing insufficient progress in denuclearization. The resumption of U.S.-North Korea talks sometime before the next inter-Korean summit, which will likely take place in mid-September, could give Moon more to work with when he arrives in Pyongyang.

Considering the difficult circumstances, it’s unclear whether Moon’s envoys would return with anything other than a fixed date for his new summit with Kim.

The two past inter-Korean summits in April and May removed war fears and initiated a global diplomatic push that culminated with a meeting between Kim and Trump in June. But Moon faces tougher challenges heading into his third meeting with Kim with the stalemate in nuclear negotiations between Pyongyang and Washington raising fundamental questions about Kim’s supposed willingness to abandon his nukes.

Moon has been aggressively pushing engagement with North Korea in past months, but the lack of progress in nuclear talks could mean an end to the inter-Korean detente.

The Korean War ended with an armistice, leaving the peninsula technically still at war. Moon has made an end-of-war declaration an important premise of his peace agenda with North Korea.