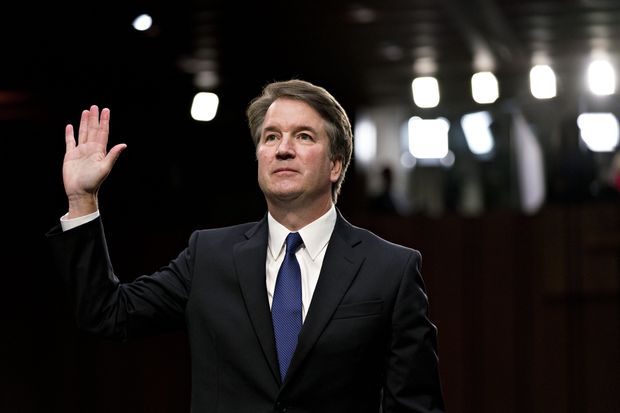 Expectations were low for Brett Kavanaugh’s confirmation hearing, and Senate Democrats on Tuesday wasted no time meeting them. We can’t tell if they’re going through the histrionic motions or if they might actually try to block a confirmation vote.

Judiciary Chairman Chuck Grassley couldn’t finish his first sentence before California Democrat Kamala Harris interrupted to demand a hearing delay. Democrats continued to speak over the Chairman even after they were ruled out of order to the jeers of protestors who had to be removed from the hearing room. Democrats interrupted 44 times in the first hour, part of what NBC reported as a “plotted, coordinated strategy” organized by Minority Leader Chuck Schumer over the weekend.

The main charge is that Mr. Grassley is “denying” crucial documents to “hide” Judge Kavanaugh’s record. The Senators are ignoring the 307 opinions he has written, and the 17,000 pages of material he provided in response to the committee’s questionnaire—the most extensive ever demanded of a nominee. The Senators have already received more than half a million pages about his time as a lawyer and judge—more documents than were provided for the past five Supreme Court nominees combined.

Most of these documents are privileged, and for good reason. They represent high-level deliberations that require honest advice. When Democrat Pat Leahy ran the Judiciary Committee, he didn’t even ask the Obama White House to provide documents from Elena Kagan’s tenure at the Solicitor General’s office, though they surely were relevant to her legal views.

Jeff Sessions, a GOP Senator at the time, asked Ms. Kagan during her 2010 hearing about the need for such privilege. She agreed that such documents “ought not to be produced” since it would undermine the “confidentiality” necessary for “effective decision-making.”

Once they got past this procedural tantrum, Democrats used their opening statements to take shots at Judge Kavanaugh’s integrity. Ms. Harris (#KamalaIn2020) derided him as a partisan who would not be loyal “to the people of the United States.” Is he a traitor? Several Senators claimed Donald Trump chose Judge Kavanaugh to protect the President from indictment or impeachment or something. Never mind that Judge Kavanaugh has written opinions that are skeptical of unchecked presidential power.

Democrats portray Mr. Kavanaugh as some Trumpian legal gargoyle, but he’s the epitome of a mainstream legal conservative that any GOP President would have had on his short list. Some 97% of the opinions and orders that Judge Kavanaugh took part in over 12 years on the federal bench were unanimous. He was in the majority 98% of the time.

Of his 62 dissents, the Supreme Court has adopted his legal reasoning in at least nine cases—an extraordinary number for an appellate judge. He’s a center-right version of his colleague on the federal bench, Merrick Garland, whom Democrats continue to laud as an ideal Justice.

The political question is whether this is all for show, or are Democrats willful enough to use Senate rules to block the nomination from proceeding to a vote? They could do so for a while if they stage a walkout, and Tuesday’s melodrama suggests they might be up for such a self-defeating gesture. About half of the Democrats on Judiciary are running for President, but have they consulted their Senate colleagues running for re-election this year?