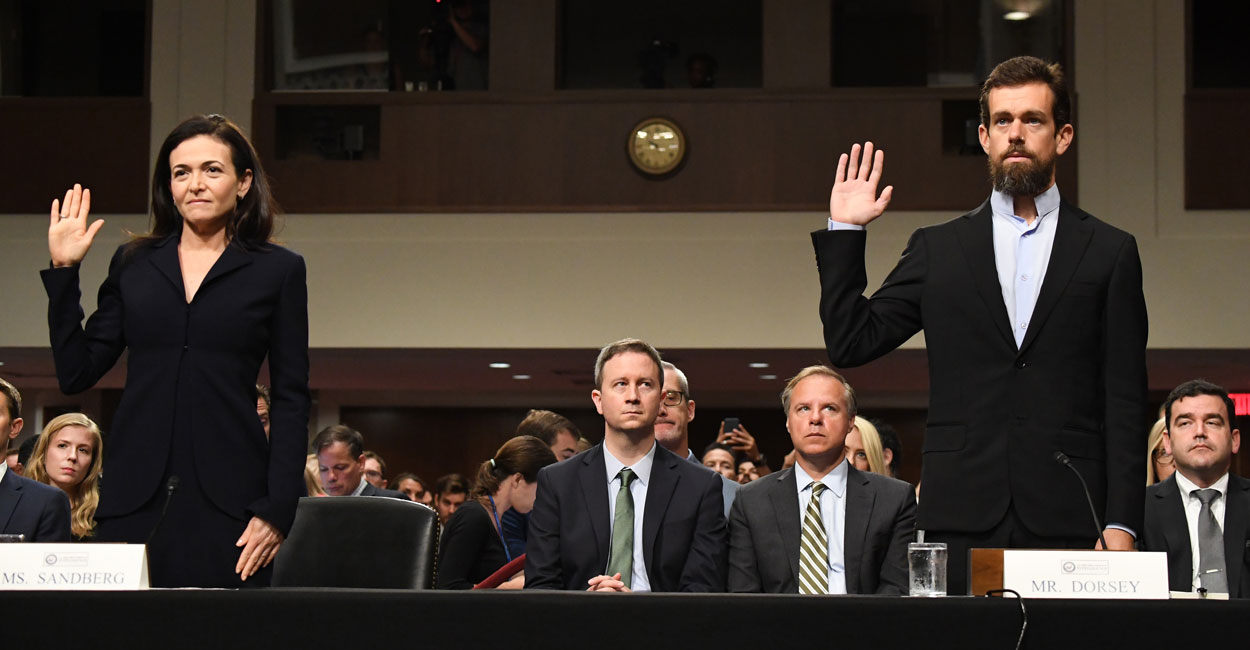 On Capitol Hill Wednesday, Facebook’s chief operating officer and Twitter’s CEO testified about foreign entities and the use of social media platforms to influence the United States’ elections.

Google CEO Sundar Pichai and Larry Page, chairman of Google’s parent company Alphabet, declined the Senate intelligence committee’s invitation to attend and testify at the meeting, according to Fox News.

President Donald Trump recently tweeted harsh criticism of Google, tweeting on Aug. 28 that the platform is “rigged” in its showing of conservative news and “Trump news” in searches.

….results on “Trump News” are from National Left-Wing Media, very dangerous. Google & others are suppressing voices of Conservatives and hiding information and news that is good. They are controlling what we can & cannot see. This is a very serious situation-will be addressed!

Here are six takeaways from the hearings.

Sandberg told senators Wednesday during the Senate intelligence committee hearing that her company is working to eradicate fake news from Facebook.

“I think we have learned a lot, and I think we are going to have to continue to learn because as we learn, our opponents learn and we keep up,” Sandberg said, adding:

We are working on technology and investments in people, making sure fake news is disseminated less on the platforms, transparency in actions in taking down bad actors, and we have seen everywhere from Mexico to Brazil to other places around the world these same techniques deployed differently and each time we see it, I think we get smarter. I think we see the new threat and we are able to connect the dots and prevent those threats going forward.

Dorsey, in the House hearing before the Energy and Commerce Committee, said Twitter does not favor one party affiliation over another.

“I want to start by making something very clear: We don’t consider political viewpoints, perspectives, or party affiliation in any of our policies or enforcement decisions,” Dorsey said. “Period.”

He said impartiality is the guiding standard of Twitter because users and observers “gather from all around the world to see what’s happening and to have a conversation about what they see.”

Sandberg said her company has been successful in taking down international accounts that could pose harm.

“Just two weeks ago we took down 650 pages and accounts from Iran, some were tied to state-owned media, and some were pretending to be free press, but they weren’t free press, and so it depends how you define a hoax, but I think we are certainly seeing them misuse information campaigns,” Sandberg said.

“We believe that at any point in time it was 3 to 4 percent of accounts [which are fake],” she said.

“In the short run or over the long run, it doesn’t benefit us to have anything inauthentic on our platform,” she added.

Dorsey told the House Energy and Commerce Committee Wednesday afternoon that Twitter is working to correct what led to the alleged shadow banning of some prominent conservatives on Twitter. Shadow banning refers to situations where an account isn’t banned but Twitter makes it harder to find the account and/or the tweets posted by the account.

“We use signals, usually hundreds of signals, to determine and to decide what to show, what to down rank, or potentially what to filter,” Dorsey said.

“In this particular case, as I mentioned in my opening, we were using a signal of the behavior of the people following accounts, and we didn’t believe upon further consideration—and also seeing the impact which was about 600,000 accounts, pretty broad-based—that that was ultimately fair and we decided to correct it.”

Dorsey said the process continues to evolve, but his company wants to be judged on fairness.

“We also decided it was not fair to use a signal for filtering in general,” Dorsey said, adding:

It is important for us to, one, be able to experiment freely with these signals and to have the freedom to be able to inject them and also to remove them, ’cause that is the only way we are going to learn. We will make mistakes along the way and the way we want to be judged is making sure that we recognize those and that we correct them.

Sandberg said Facebook is working to implement practices and programs to better serve and educate users on how the platform works.

“We have worked on media literacy programs, we have worked on programs and public service announcements around the world that help people determine if this is real news or not and help people be educated,” she said. “I think one of the most important things we’re doing is that once a piece of content has been rated as false by our third-party fact-checkers, if you are about to share it, we warn you … and so you are educated as you are about to take that critical step.”