Pakistan is Responsible for the Corpses in Afganistan 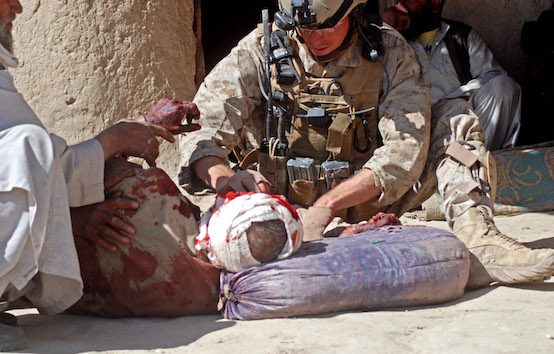 Mina, a widow, and her five children spotted corpses on the ground as she fled Ghazni. The street was covered with the bodies of civilians and policemen; more than 200 Afghans had been killed. It was August 10 and the Taliban had just stormed into the city of Ghazni, which they would control for nearly five days.

While American forces were assisting the Afghan government in retaking Ghazni, the Taliban staged deadly assaults in Faryab and Baghlan.

These attacks are not a coincidence.

Despite the billions of dollars that Washington has expended on its longest war, the Taliban has been getting stronger.

In an attempt to turn the tide, Washington has been holding face-to-face talks with the Taliban for the first time. These discussions are intended to induce the Taliban into suspending its insurgency and entering peace talks with the Afghan government by addressing the Taliban’s demand: the withdrawal of international forces.

However, the Taliban was fighting the Afghan government long before the United States entered the scene in 2001. Nearly seven years prior, in 1994, the Taliban began its insurgency in Kandahar, and it’s continued unabated for nearly a quarter century.

The Taliban frequently changes its narrative, justifying its insurgency according to Afghanistan’s political climate. During the 1990s, it rationalized insurgency by labeling the Mujahideen, the ruling elite, as corrupt. Now it justifies the war by portraying the assistance of the international community as a foreign occupation.

These changing narratives are a convenient tactic employed by the Taliban to conceal its real motive: advancing the interests of neighboring Pakistan in Afghanistan.

During the Taliban’s reign, Peter Tomsen, former United States Special Envoy to Afghanistan, noted that Pakistan’s intelligence agency, the Inter-Services Intelligence (ISI), “played the major role in military matters, from organizing offenses to equipping the forces that were fighting, and even putting out public statements. …There was a colonel in Herat and there was a major in Kandahar—they were coaching Mullah Omar and other Taliban, who were for the most part semiliterate, on how to administer their areas and how to proceed militarily.”

This continues to be the case today, and by all accounts, the American foreign policy and military establishment is well aware of it. President Trump has publicly accused Pakistan of “lies and deceit” and a $300 million aid package to the country was canceled just last week. Pakistan has countered by saying they are being made the scapegoat for American failures in Afghanistan. On Wednesday, Secretary of State Mike Pompeo met with new Pakistani prime minister Imran to call for a “reset” on the two countries’ strained relationship. According to a State Department tweet, Pompeo “emphasized Pakistan’s important role in negotiated peace in Afghanistan & need for sustained, decisive measures against terrorists & militants threatening the region,” before flying off for India just a few hours later. To say none of these issues were addressed with any seriousness or depth would be an understatement.

In a study conducted by the Crisis States Research Centre that analyzed the relationship between Pakistan and the Taliban, a Taliban commander asserted, “If anyone rejects that the ISI backs or controls the Taliban, he has a mental problem…all our plans and strategy are made in Pakistan and step by step it is brought to us, for military operations or other activities.”

Not only does Pakistan play an indispensable role in the Taliban’s military operations but Pakistan actively garners fighters for the Taliban by sponsoring Pakistani institutions that advocate jihad in Afghanistan.

Without Pakistan’s support, the Taliban would be incapable of running the insurgency. Even a key member of the Taliban admitted this. Mullah Rahmatullah Kakazada told The Guardian in 2016 that “If we left Pakistan we would not survive one week.”

In fact, Pakistan has the ability to unilaterally conduct the Taliban’s insurgency. In 2013, as Mullah Omar, the Taliban’s supreme leader, died in a prominent hospital in Karachi, Pakistan hid his death from the world. Subsequently, Pakistan successfully executed the leaderless insurgency for nearly two years until Omar’s death was publicized in 2015. During those two years, Pakistan actually impersonated Mullah Omar, delivering statements under his name that supported peace talks.

Although Pakistan fuels the insurgency, it also supports the Taliban’s peace talks with Kabul. Why? Former U.S. ambassador to Afghanistan Zalmay Khalilzad noted in an interview with Radio Free Europe/Radio Liberty Dari that Pakistan desires the initiation of Afghan peace talks to reduce pressure from the international community seeking its constructive role in the war. According to Khalilzad’s sources, “Pakistan has told the Taliban to enter peace talks but do not make peace.”

But the current negotiations are flawed beyond just the Taliban’s masquerade.

In Afghanistan, the Taliban is a non-veto player. The Taliban has never been able to unilaterally carry out the war as it has always been dependent on Pakistan. With or without a leader, the Taliban movement continues to survive because it’s supported by Pakistan.

Pakistan’s unique and pervasive authority over the Taliban makes it a veto player in the conflict. Pakistan’s consent is required to dismantle the Taliban’s movement and bring America’s longest war to an end. Peace talks with Pakistan, not with its proxy the Taliban, will alter the course of the war.

This month, the next round of talks between Washington and the Taliban will take place in Qatar. While such diplomacy is a new approach, without Pakistan’s involvement it will yield the same result as have previous ones: a stronger Taliban committed to continuing the war.

Sabera Azizi is a graduate student of international relations at City University of New York. She tweets at @saberaazizi.