Grenell rips White House press corps: Can you find Kosovo and Serbia on a map? 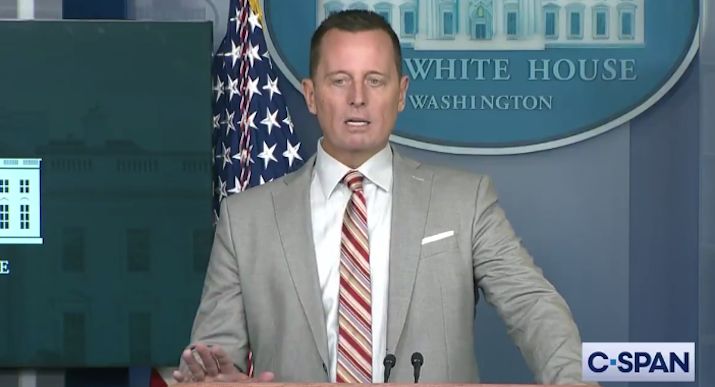 Cartography wasn’t Ambassador Richard Grenell’s actual main concern, of course. A proper translation of his blast at the White House press corps would be: can you find your a** with both hands and a flashlight? The White House made Grenell available for the daily(-ish) press briefing to allow the media ask for the details and meaning of yesterday’s surprising Serbia-Kosovo deal brokered by the Trump administration. Anyone who watched the Balkans Wars in the 1990s — and especially the fight over Kosovo — had to marvel at the development, especially without Russia’s participation.

The problem, as Grenell surmises almost immediately, is that few if any of the journalists in the room had reached an age of reason by the time those wars finally ground to a halt. After a reporter tried to change the subject with the very first question of the briefing, Grenell ripped into their approach as “atrocious”:

AMBASSADOR GRENELL: Yeah, let me just talk about Kosovo and Serbia. I don’t know if you can find it on a map. But this is atrocious. I have to tell you guys, you might be too young to understand what this issue is about. Maybe the older journalists should step up and say, “This is a big deal.” This is a big issue. I’m astounded what happens in Washington, D.C., and especially in this room. I got to tell you, it’s substantive. Maybe it’s too complicated of an issue for you all.

Q Ric, respectfully, this is the first time we’ve had the opportunity to speak with these individuals. There are a lot of questions to address.

AMBASSADOR GRENELL: Okay, but today is about Kosovo and Serbia. Let’s take a little time and talk about this 21-year issue, Peter. I mean, 21 years. We’re getting the same questions that are all politics. I don’t — you guys don’t understand what’s happening outside of Washington, D.C. People aren’t listening to you anymore. It’s really a crisis in journalism. And I think it’s because people are too young to understand the issues like Kosovo and Serbia.

Reuters correspondent Jeff Mason then huffily responded, “I don’t think any of us came here for a lecture about our questioning.” Mason then asked a question about the issue at hand — but it didn’t improve matters. He asked whether the agreement constituted “full economic normalization” between Serbia and Kosovo. When Grenell asked him to define “full,” it became clear that Mason didn’t know what he himself had meant by it, and hadn’t bothered to check out the agreement first:

Richard Grenell: “I’m just going to talk about Kosovo-Serbia. I don’t know if you can find it on a map…you might be too young…maybe it’s too complicated an issue for you all.”@jeffmason1: “I don’t think any of us came here for a lecture about our questioning.” pic.twitter.com/8nXKyCNv3J

One measure of Grenell’s criticism can be taken from what didn’t get asked. Not one reporter in the room thought to ask why Russia hadn’t been part of this process, or why Vladimir Putin ended up on the sidelines. For nearly twenty years, Putin has supported Serbia against all challenges to its sovereignty; Russia, along with China, refuses to recognize Kosovo at all, in fact. Putin’s absence from this process signals a surprising distance between Serbia and Russia and an apparent waning of Moscow’s influence in the Balkans, which would be a very big development for the integrity of Europe as a political entity. Just three months ago, Serbian president Aleksandar Vucic had declared that Moscow would have veto power over any attempted resolution of its status with Kosovo.

So where were the Russians yesterday? Did they approve of this agreement, or did Vucic decide to go it alone after all and trust the Trump administration instead? Didn’t anyone in the room know enough of that history and context to think to ask these questions?

It’s not as if the press corps didn’t know Russia existed. The press briefing included multiple questions about Russia in terms of election interference and its actions against American forces in Syria. The interest in these issues were clearly of the inside-the-Beltway variety, as Grenell surmised. Not one of the reporters in the room appeared aware of the geopolitical issues surrounding the Balkans and Serbia in particular in regard to Russian influence, and what this agreement might mean for it. Grenell must have been mystified that no one picked up on that … but I’d guess he wasn’t much mystified by it at all.