In the Tank Media DISTORT Trump’s Advice as ‘Vote Twice’ 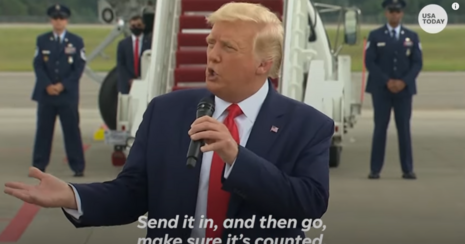 It never ceases to amaze.

There is President Trump in North Carolina, and he speaks on the mail-in ballot issue. He sensibly says the obvious. Since there has been evidence that mail-in ballots have not been counted in various elections, voters who have voted by mail should, on election day, go in person to the polls and find out if their ballot was received and validated. If not, then vote in person.

To any sensible observer this is quite obviously not voting twice. If a mail-in ballot has not been received and validated by the deadline, it cannot be counted. Then, in fact, voting in person is voting once – not twice.

Let’s illustrate, shall  we?

The story says this:

“Nearly 3,000 voters in Georgia have filed complaints with voting officials, claiming they never received absentee ballots for the state’s Aug. 11 primary runoffs, according to a report.

A photo obtained by Atlanta’s FOX 5 showed some of the ballots still inside a post office Aug. 12 – the day after the runoffs – meaning the undelivered ballots were no longer usable by voters if they eventually received them.

Because the ballots went undelivered on time, some voters complained to voting officials and to the station that they ended up not participating in the runoff elections.”

If, in fact, the 3,000 Georgia voters who never received their requested mail-in absentee ballot had showed up in person to vote they would, quite obviously, have voted only once. If their mail-in ballot has not been received and validated – and will not be –  then they have not voted.

This would seemingly be obvious. What the President was saying was clearly that Americans have a right to have their vote counted.

But to the media? No.

Here is the wildly misleading headline from US News via Reuters: “Uproar After Trump Suggests Voting Twice in North Carolina, an Illegal Act.”

“WILMINGTON, N.C. (Reuters) – U.S. President Donald Trump has urged residents of North Carolina to try to vote twice in the Nov. 3 election, once by mail and once in person, causing a furor for appearing to openly urge a potential act of voter fraud.”

Here is The HuffPost headline with the same Reuters story:

The president suggested in an interview that people in the state of North Carolina should send in their votes and then vote in person.

Then there was this from Mediaite: “Trump Apparently Encourages His Supporters to Commit Voter Fraud to Test Election System.”

“Chris Cuomo went off on Attorney General Bill Barr, slamming the latter’s performance in an interview with CNN’s Wolf Blitzer earlier on Wednesday night as a display of political fealty and willful ignorance on the part of the nation’s chief law enforcement officer.

…’And now this president who’s been carping constantly, literally months about voter fraud without basis, floating doomsday scenarios without basis: The election’s going to be rigged if you vote by mail. What’s his answer?”’ Cuomo asked. ‘Literally, he says the answer to secure a safe election is for Americans to try to vote twice. I kid you not.’”

Incredibly, Jake Tapper of CNN tweeted this: “President Trump told his North Carolina supporters to try to vote twice — it’s a Class I felony ‘to induce’ someone to do this.”

Incredibly, even Fox’s Sandra Smith and Dana Perino said a version of the same.

Again.  No. The President clearly did no such thing.

As that Georgia example illustrates all too clearly, voters have a right to know if their ballot has been received and validated by the voting precinct involved.

This problem also arose in the recent New York Democratic primary for president. Here’s the headline from The New York Post: “Over 80,000 mail-in ballots disqualified in NYC primary mess.”

The Post story said this, bold print for emphasis supplied:

“The mail-in ballots of more than 84,000 New York City Democrats who sought to vote in the presidential primary were disqualified, according to new figures released by the Board of Elections.

But the certified results released Wednesday revealed that only 318,995 mail-in ballots were counted.

That means 84,108 ballots were not counted or invalidated — 21 percent of the total.

…“A 26 percent invalidation rate is astounding. It’s very troubling,” said Arthur Schwartz, who represented several candidates in a federal lawsuit claiming voters were disenfranchised over the BOE and Postal Service’s handling of ballots.”

Mr. Schwartz is indeed right. Those 80,000-plus voters were in fact disenfranchised. They trusted the system — and the system screwed up. They should have been able to show up-in person on election day and ask whether their vote had been legally received and validated. And if the answer was that their ballot had not been received or had been rejected because of a lack of a postmark or rejected because they forgot to sign the ballot or something else, the voter – and the election officials – should know then and there that since the voter’s mail-in vote had not and would not be counted, the voter was well within his or her rights to vote right then and there in person, following the usual requirements.

That is not voting twice because, again, the first vote was not counted and would not be counted.

In sum? This is a considerable media failure. Whether deliberate (hmmmm) or not, it is a failure to comprehend how the American election system works. It is a failure to understand that yes indeed, as illustrated in August in Georgia and June in New York, voters trusting the mail-in ballot system were, in fact, disenfranchised.

The very idea that a registered voter should be deprived of the right to inquire if a mail-in ballot has been received and validated, and if not, be able to correct the problem in person, is …the word that comes to mind is un-American.