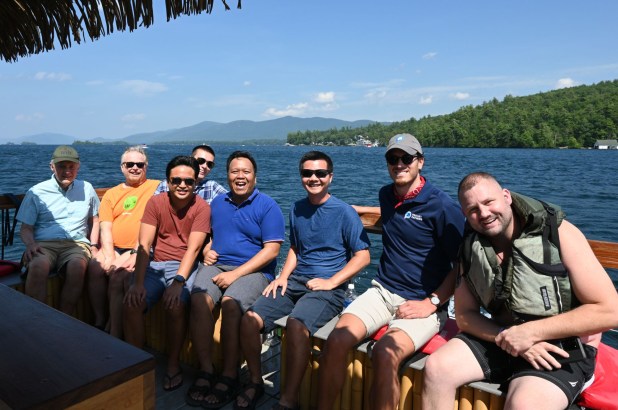 It was a miracle on the lake.

A drug counselor and recovering addict kayaking in Lake George, near Albany, had his prayers answered this week when he capsized in deep choppy water and was saved by a gaggle of priests partying on a Tiki boat.

Jimmy MacDonald got separated from his wife and step kids while on the water after taking pictures on his new cellphone.

As he tried to make his way back, MacDonald hit choppy water and capsized. Wearing an ill-fitting life jacket, he tried desperately to right his kayak and keep his $1,400 phone from getting wet.

“That’s when I said, ‘Alright, I think I might die today. I think this might be it’,” MacDonald told local NBC affiliate WNYT. “I prayed to my lord and savior Jesus Christ for help.”

Nearby, Greg Barrett, a captain for Tiki Tours, heard his call.

“I turned the boat toward him, I realized his life preserver had been in the upper portion of his head and he was, he was hanging on for dear life,” Barret said.

MacDonald was pulled out of the water by Barrett and his passengers — a boatload of priests and seminarians from the Paulist Fathers, a Catholic retreat on the lake.

“How funny is it that I’ve been sober for seven years and I get saved by a tiki bar?” MacDonald laughed. As for being saved by a bunch of priests, Macdonald said: “I just take that as a sign from God that he’s got me here for a real reason.”