I feel no schadenfreude for the grim future awaiting a young woman named Clara Kraebber, though I do hope for the sake of the rest of us that she ends up in prison.  Far too many people, many of them young, college educated, and from affluent backgrounds, have become intoxicated from the brainwashing they received in the course of their “higher” education, and feel free to unleash their inner-Shiva by allegedly engaging in destructive riots, somehow in the cause of racial harmony, or maybe sheer revolution.

Young Ms. Kraebber is no dummy. She is a student at Rice University, one of the most selective schools (a mere 9% of applicants were admitted in 2019) in the country and is a graduate of Hunter College High School on the Upper East Side of Manhattan, whose students score in the top one-quarter of one percent of students based on test scores. Her parents are members of the nation’s academic elite – her father is a psychiatrist on the faculty of Columbia University, while her mother is the principal of an architectural firm bearing her name whose clients include Columbia and NYU. Her family lives in the Upper East Side in an apartment for which they paid $1.8 million 4 years ago, and also boasts a house in Connecticut with 4 fireplaces.

On Friday, young Clara was arrested for allegedly participating in a 3-hour rampage that did an estimated $100,000 in damage, smashing store windows and doing other damage to lower Manhattan. 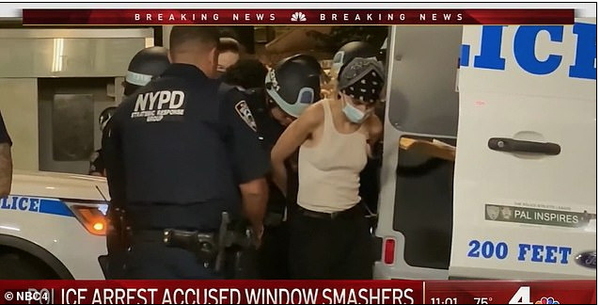 “Every city, every town, burn the precinct to the ground!” the group chanted as it moved up Lafayette Street while busting the plate glass facades of banks, Starbucks and Duane-Reades.

The protest was organized by groups calling themselves the “New Afrikan Black Panther Party” and the “Revolutionary Abolitionist Movement.”

Rioters all over the country have inflicted terrible harm on innocent people, many of them minority small business owners. That a person of above average raw intelligence would engage in this form of wanton destruction is evidence that evil people have warped her young mind. And apparently she has eagerly adopted the worldview and engaged in destruction for pleasure. The only way to prevent this poison from spreading and reverse it is to hold those responsible to the maximum punishment that the law allows.

Manhattan District Attorney Cyrus Vance, Jr. is a notorious leftist, currently notable for seeking to subpoena Donald Trump’s income tax records, so his office’s treatment of young Clara Kraebber must be strictly scrutinized. On no account should the wealth and influence of her family be allowed to garner lenient treatment. Justice for Black defendants doing time for inflicting $100k in damage demands that she receive equal if not harsher treatment to ensure that others are not seduced into violent revolutionary activity, as she apparently was.