Not Weimar America, But Dark Times All the Same 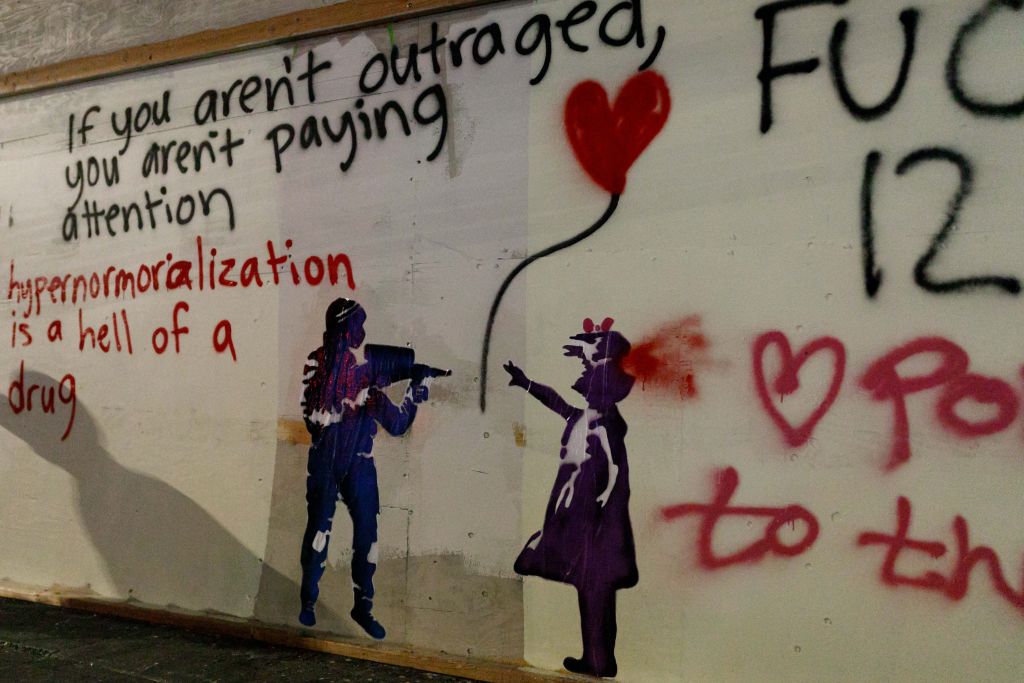 We’ve got a long, long way to go before a Reichstag fire, but the violence in Kenosha and Portland still recalls our own haunting past.

There’s a scene in Christopher Isherwood’s novel Goodbye to Berlin where the author goes to visit Bernhard Landauer, the owner of a prosperous department store in Germany. The year is 1933 and Bernhard shows Christopher a vicious message he’s received, threatening to kill him and all his fellow Jews. Bernhard shrugs this off but Christopher insists he go to the police: “The Nazis may write like schoolboys,” he says, “but they’re capable of anything. That’s why they’re so dangerous. People laugh at them, right up to the last moment…”

Here in America, it’s been easy to laugh at those who have threatened political violence over the past four years, and even at those who have carried it out. Their rogue’s gallery can look like something out of a campy video game: ninja-like black masks who run through the streets LARPing revolution? Mostly white college students screaming “black lives matter”? I still haven’t figured out exactly what a boogaloo boy is supposed to be. Even after the horror in Charlottesville, the white supremacists yodeling about “the Jew” on their way back from the latest Wolves of Vinland potluck come off as more sad than dangerous. It’s easy to laugh at these people, to dismiss them as dorks and thumbsuckers; it’s easy to laugh until it isn’t, until your cities are burning, until you look down and realize you’ve been dancing on a volcano.

So it’s gone in America today. Our fraught and volatile political climate has even led some to compare us to the Weimar Republic that Isherwood was chronicling. The term “Weimar America” has come into usage, popularized by writers like TAC‘s own Rod Dreher. Just as in pre-Nazi Germany, these thinkers say, America’s streets are now roiled by unrest perpetrated by extremists who have no respect for mediating institutions and view violence as just another necessary means of political expression. The left is mostly responsible for this chaos, though the right has also gotten involved, at Charlottesville, in Kenosha and Minneapolis, and in Portland where rioters shot and killed a Trump supporter last weekend. There are other similarities too: hedonism, decadent elites, the so-called center falling away.

Certainly illiberal left-wing militants clashing with illiberal right-wing militants is a portent right out of the 1930s. And certainly, too, as Michael Davis has pointed out, if society’s traditional elements feel threatened by bullies, they’re more likely to unite behind a bully of their own, a Hitler or a Franco. There are also parallels between America and Weimar at the ideological level. One of the aptest descriptions of Weimar, attributable to the academic Finlay McKichan, is that it was “a republic nobody wanted”—and since its ideologues didn’t want it, they didn’t hesitate to look beyond it, to dream of an abstract and supposedly stronger polity. Likewise have some American thinkers come to see their own republic as indefensible and sickly. On the left, this strand has existed for decades, mostly among Marxists who see the United States as too capitalist and imperialist. On the right, it can be found among the postliberals, who view our Enlightenment roots as withered and who, at their edges at least, long for a monarchy or a Catholic integralist state.

These schools are on the rise among intellectuals, but they’re also hardly representative of America today. Outside of the ivory tower and Twitter, few Americans deplore their founding or want to see their nation radically overhauled. The recent Democratic and Republican conventions, star-spangled affairs in their own ways, were evidence enough of that. Contrast that to the Weimar Republic, whose very formation was opposed by powerful societal factions (including the military). Demonstrating the lack of public buy-in, before the Weimar constitution was even signed, Bavaria broke away and formed its own socialist state. Two years later, right-wing forces under Wolfgang Kapp briefly overthrew the government; three years after that, Hitler tried something similar in Munich with the Beer Hall Putsch.

In Goodbye to Berlin, Bernhard says to the author, who is English, “You, Christopher, with your centuries of Anglo-Saxon freedom behind you, with your Magna Carta engraved upon your heart, cannot understand that we poor barbarians need the stiffness of a uniform to keep us standing upright.” That might seem like an amusing observation today, given the paltry state of the German military, but it also gets at an important truth about the British and their American cousins. Even if we now seem to be coming apart, even if our Overton Window is widening, we have centuries of liberal democratic practice behind us, civic traditions and attitudes that can’t just be rolled up like a carpet. These have weathered chaos before and may yet again. They’re at least still sticky enough that even in these frenzied times, we don’t have rogue bands of Freikorps roving the streets, frequent uprisings by communists, regular assassinations of politicians.

One reason for this is yet another important distinction between America and Weimar Germany: we are not an economic basket case. Though it briefly stabilized during the mid-1920s, Weimar was for much of its existence plagued by unemployment, as well as hyperinflation, which debauched the Reichsmark. This was a result of both war debt and promiscuous money printing by the government, which under the Treaty of Versailles owed steep reparations to its former World War I enemies. This economic debilitation became intertwined with civic grievance: the treaty was viewed as a national humiliation, and all the more so after Germany defaulted on its payments and French and Belgian troops occupied its industrialized Ruhr region as punishment. Such deprivation and wounded pride further discredited the government and drove people to the margins, as they sought sweeping answers to sweeping problems. The result was a political scene that, by the early 1930s, was dominated by Nazis and communists.

America, needless to say, has nothing that even approaches this. Our economy is bleeding at the moment thanks to coronavirus restrictions, but it doesn’t compare to Weimar’s protracted woes, and while our national debt is a disgrace, there is no hyperinflation to speak of, at least not yet. We will have to deal with all this eventually, of course, and rehabilitating our economic fundamentals ought to be a priority once the coronavirus recedes. Cannonball a full-scale and long-term economic meltdown into our current political waters and you could very well set off a tidal wave. But right now, all things considered, I would respectfully disagree with the Weimar America characterization. The differences are too stark, and given the potency of the metaphor, that ought to matter.

But if we’re not Weimar, then what are we? One of my favorite books about the Civil War is This Hallowed Ground by Bruce Catton. Published in 1955, it begins in the year 1856 with the Bleeding Kansas crisis and the caning of Senator Charles Sumner by Congressman Preston Brooks. Catton writes:

Angry words were about the only kind anyone cared to use these days. Men seemed tired of the reasoning process. Instead of trying to convert one’s opponents it was simpler just to denounce them, no matter what unmeasured denunciation might lead to. …He had not been trying to persuade. No one was these days; a political leader addressed his own following, not the opposition. Sumner had been trying to inflame, to arouse, to confirm the hatreds and angers that already existed.

We may not be Weimar, but that doesn’t mean there aren’t dark clouds gathering on our horizon.