Oregonians give the New York Times an earful about Portland 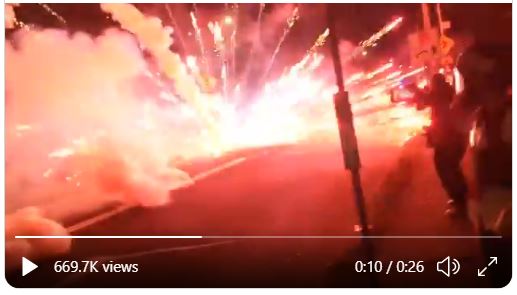 Much to the New York Times’s surprise, people who live outside Portland in Oregon aren’t big fans of the riot-synonymous city. Here’s a quote buried way down the bottom of the piece:

“Portland is a garbage dump,” said Ms. Johnson, the resident of Gresham, a half-hour away. “I don’t want anything to do with it.”

It had to have been a surprise.

The piece was done in the context of an impressive anniversary, at least if you’re a rioter – the 100th day solid of riots burning through that city.

The Times headline creates that false declivity it’s often famous for – interviewing the mugger and the muggee, with that “two lives intersect” template. Their prim headline in this case is:

100 Days of Protest: A Chasm Grows Between Portland and the Rest of Oregon

Which is a little bit of an understatement. Fact is, the reporter found pretty much no one with anything nice to say about Portland. With Antifa and other allied mob elements taking over the city, turning it into a riot-infested hellhole, mostly from a marching army from someplace else, it quite likely isn’t anyone born in Oregon. Heck, even Portlanders born elsewhere don’t like it.

“I’m a normal person and I don’t have extremist views,” Ms. Crymer said. “Normal people should be able to feel like they can fly an American flag and not get hunted down for it.”

As you may imagine, gun sales in that state are through the roof:

“There’s panic buying every once in a while but nowhere near like this,” Mr. Coleman said at the entrance of his shop, fortified with steel bars. “There’s such a massive rush, people are taking anything they can get.”

And there was nobody they could find to defend the riots to give that “chasm” claim some heft.

Nobody, and you know they looked.

Which shouldn’t surprise anyone. An old hedge fund manager 20 years ago told me to not go looking for FARC supporters in the wilds of Colombia because “nobody, the world over, like guerrillas. Nobody.” And when I went to Colombia six years later, in 2007, I asked around, and got an earful — confirming my hedgie pal was right in spades.

Purveyors of civil unrest and property damage and disturbances of peace are despised no matter where they turn up.

Fortunately, the Times report shows that also see this in Oregon, telling the rest of us somehow, somewhere, there are sane people in Oregon. We all know there must be, for who doesn’t like to buy Tillamook cheese and Oregon blueberries? Those are nice products, surely they can’t be made by leftists. I like to buy my iris rhizomes (those are the little roots you plant to get big iris blossoms in summer) from a nice little farm in Oregon. I’m gratified to hear that nobody like what’s going on in Portland from those quarters.

Once upon a time, Oregon was a normal place. Now that it’s ground zero for leftist lunacy, one can only hope that normal Oregonians get their bearings, pin the blame where it belongs on the Democrats, and one day throws them all out. It won’t happen tomorrow, given the way the urban areas completely render powerless the rural areas – we also see this in California, where tremendous numbers of noncoastal counties always vote red, and are wiped out and treated with contempt by the bluesters.

Same dynamic in Oregon, and we in California commiserate.

One can only wonder what the Times really heard if these quotes from the Oregon normals actually made it to print.