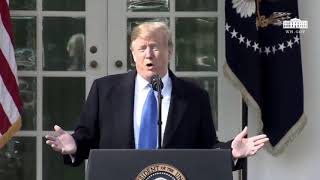 President Donald Trump has confirmed that he’s declaring a national emergency to draw funding from various areas of the government and construct his border wall. In his speech from the White house Rose Garden on Friday, Trump railed against igal immigration and the supposed taking place at the southern border without a wall to stop from pouring into America. As Trump told stories about ilal immigrant and said “it’s all a big lie” when critics say a wall won’t fix the problem, Trump confirmed “I’m gonna be signing a national emergency.” “It’s been signed many times before. It’s been signed by other presidents from 1977 or so, it gave the presidents the power. There has rarely been a problem. They sign it, nobody cares. I guess they weren’t very exciting. But nobody cares. They sign it for far less important things in some cases.”
“ Co ulter, I don’t know here. I hardly know her. I haven’t spoken to her in way over a year,” Trump said. “But the press loves saying, ‘ Cou lter.’ Probably if I did speak to her, she’d be very nice. I just don’t have the time to speak to her. I would speak to her. I have nothing against her. In fact, I like her for one reason. When they asked her right at the beginning, ‘Who’s going to win the election?’ She said, ‘Donald Trump.’ And the two people that asked her that question smiled. They said, ‘You’re kidding, aren’t you?’ Nope. Donald Trump. So I like her.
President Donald Trump tried to bolster his case for declaring a national emergency to secure funding for a southern border wall by spotlighting the parents of children who were k by igal immigrants, or allegedly k by ille immigrants.
“We have some of the greatest people we know, they’ve been with me from the beginning of my campaign, almost from the first week, the angel moms,” Trump said Friday in the White House Rose Garden — pointing to the group of parents. “Unfortunately, we have new angel moms. One incredible woman who showed me her daughter who…was k in the year of ’18. I said I haven’t seen you before. She said, I’m new. I said that’s too bad. It’s too bad. It’s so sad.”
The president took a swipe at the media for, in his view, not providing sufficient coverage to these parents.
“The press doesn’t cover them,” Trump said. “They don’t want to, incredibly.”