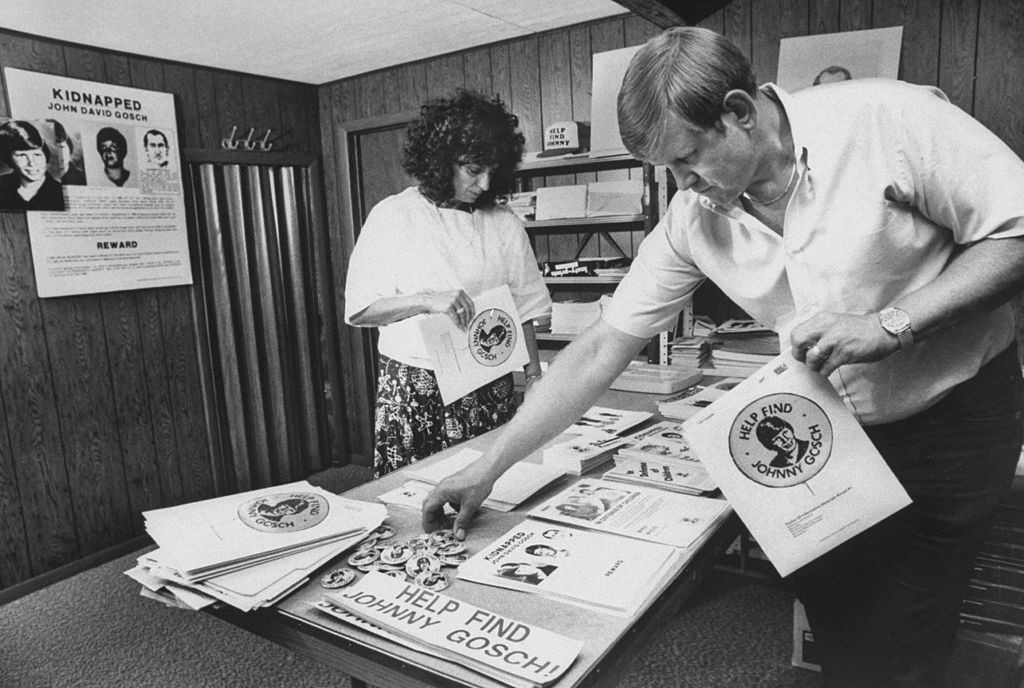 Noreen Gosch standing next to husband John in basement office where they leaf through their fliers, buttons & bumper stickers (Photo by Taro Yamasaki/The LIFE Images Collection via Getty Images/Getty Images)

In the fast-paced twenty-four-hour news cycle, Americans have grown used to constantly changing headlines and a barrage of multiple breaking stories. But two narratives in the past fourteen months have become embedded in the American psyche.

Those are the renewed focus on police impropriety, and last year’s obsession with sex trafficker Jeffrey Epstein’s arrest and mysterious death in jail. Today we find ourselves on the anniversary of a misfortune that intertwines both of these phenomena and shines a light on the most malignant parts of our social structure.

At 6:00am, exactly thirty-eight years ago this morning, 12-year-old Johnny Gosch left his home in suburban Des Moines, Iowa to deliver newspapers. This was the first time Johnny did his paper route without being accompanied by his father. Instead he was joined by his dog Gretchen as he pulled his red wagon full of newspapers through the neighborhood.

Multiple witnesses, both teens and adults, recall seeing a strange car driving around—a blue, two door Ford Fairmont with Nebraska plates—at one point stopping to talk to Johnny. They also reported seeing a man, after being signaled by the driver, emerge from between two homes and follow Johnny down the street. Out of sight, people heard the slam of a car door and the screeching of tires.

Johnny’s parents, Noreen and John Gosch Sr., were alerted that something was wrong when they received phone calls that neighbors hadn’t received their newspapers. When John Sr. went searching, he discovered his son’s wagon on the sidewalk, full of papers, and Gretchen the dog having returned home alone. Johnny had vanished.

Jumping into action, Johnny’s parents immediately phoned the police and began collecting eyewitness testimony. When an officer arrived forty-five minutes later—despite the station only being ten blocks away—John and Noreen had already surmised the incident described above. Still the police incredulously asked them, “Has your son ever run away before?” It was the beginning of a long nightmare.

The Des Moines police informed them that they were declining to act before Johnny had been gone seventy-two hours—in 1982, the perquisite wait before you could report a missing child.

The next day, John and Noreen organized a thousand volunteers to search the town and comb through the local woods. The only law enforcement involvement they received was Police Chief Orval Cooney arriving and telling search parties over a bullhorn, “Go home folks, the kid is probably just a damned runaway.”

Cooney appeared determined to sandbag any efforts undertaken by the family. “I don’t give a damn about what Noreen Gosch has to say,” Cooney told the local press in 1983. “I’m kind of sick of her.” The chief was soon compelled to resign after eighteen officers—in a police department of only thirty-seven people—complained about his behavior, which included drinking on the job, fixing tickets for friends, and racism.

This non-cooperative response from authorities is representative of what victims’ parents experienced in the early 1980s; a lethargic local police, no children’s organizations or infrastructure to report their kidnapping, and an absent FBI (“We have no crime,” one federal agent told Noreen). Thinking creatively, Johnny became the second missing child to ever be put on a milk carton.

“At its worst, you can’t think this kid ran away. He had to have been abducted. And yet to this day he’s just considered a missing person. There is no crime associated with his case or otherwise,” says David Beilinson, partner in Rumur Productions and director of the 2014 hit documentary Who Took Johnny.

Future response times changed due to John and Noreen, who are singularly responsible for Iowa’s passage of the Johnny Gosch Bill in July 1984, which abolished the seventy-two hour wait period and required police to begin the search for missing children immediately. That has now become the national standard.

“That would not have come out if it wasn’t for Noreen Gosch in 1982 screaming at the top of her lungs to anybody that would listen that her son was kidnapped and that we need to do something about it,” Beilinson told TAC.

But the eponymous question remains: who took Johnny?

The trail remained cold until 1991 when Paul Bonacci, a 24-year-old then imprisoned in Omaha, Nebraska for molesting his cousin, came forward with the claim that as a teenager he had been a forced participant in Johnny’s kidnapping. Bonacci has been diagnosed with multiple personality disorder, a side effect from having suffered sexual abuse since the age of 8.

According to Bonacci, Johnny was brought into the world of child sex trafficking, with Paul claiming to be the first person to molest Johnny on film, as a sort of advertisement for predators. Bonacci said he saw Johnny again in 1986, where he was being held with other children in a house in Colorado.

Noreen Gosch is adamant that Bonacci is being truthful. In her recorded conversations with Paul, Noreen said he described details about her son that were not reported in the media, including physical markings on Johnny’s body and idiosyncratic, personal behavior. In a 1992 investigation conducted by America’s Most Wanted, the show used Bonacci’s description to locate the then-abandoned house in Colorado. There the team discovered a hidden underground chamber where, according to executive producer Paul Sperry, there were children’s initials carved into the walls.

Despite this corroboration, Des Moines police have repeatedly declined to interview Bonacci.

The accused operator of this Omaha-based prostitution ring was Lawrence E. King, general manager of the Franklin Federal Credit Union. One of the rising black stars in the GOP, King was the former Vice Chairman of the National Black Republican Council and sang the national anthem at the 1984 Republican National Convention. Known for extravagant personal spending and throwing $100,000 parties, in April 1988 the FBI raided his bank and charged King with embezzling nearly $40 million.

A state senate committee formed in November to investigate both Lawrence E. King’s financial dealings and the allegations of sex trafficking. The claims originated in the foster care system where a social worker’s report on victim’s stories had been forwarded to authorities but was ignored. Boys Town, the nationally renowned orphanage, had numerous connections to the Franklin Credit Union, including commercial accounts and sending minors to gain work experience under King.

The senate committee hired private investigator Gary Caradori to separate wheat from chaff and compile evidence. Caradori, a former state trooper, drew up a leads list of sixty potential victims and conducted videotaped interviews that added up to twenty-one hours of testimony. In July 1990, while allegedly in possession of photographs taken at King’s sex parties, Caradori’s small plane inexplicably disintegrated mid-air over Illinois. He and his eight-year-old son were killed, and his briefcase was never found.

An atmosphere of pressure, including Caradori’s suspicious death, anonymous threats to the victims, and intimidation applied by the feds led four of the six witnesses to retract their stories. “The FBI did everything it possibly could to discredit those kids. The behavior of the FBI is so egregious in the Franklin case, it’s worse than appalling,” said Nick Bryant, author of The Franklin Scandal: A Story of Powerbrokers, Child Abuse & Betrayal, who is in possession of the grand jury testimony and exhibits, along with Caradori’s surviving documentation.

Bryant has also been one of the primary journalists investigating the Jeffrey Epstein saga, including publishing the billionaire’s black book of social contacts in 2015. “There are many similarities between the Franklin scandal and the Epstein network,” he intones.

The grand jury indicted Lawrence E. King for financial crimes and for paying men for sex—for which he would serve ten years in prison—but called allegations of sex trafficking a “carefully crafted hoax.” The grand jury accepted that the teens had been abused, but not by the people they identified. Their conflicting conclusions were denounced by the senate committee.

The two people who refused to retract their story, Alisha Owens and Paul Bonacci, were indicted for perjury. At twenty-one years old, Owens was convicted and served over four years in prison, two of which were in solitary confinement. Bonacci later sued King in civil court for damages done and was awarded $1 million—which was never paid.

While today knowledge of pedophilia is ubiquitous—an awareness that was not present forty years ago—there exists an unfounded skepticism that child predators are able to coordinate their activities. “Drug addicts find each other. Pedophiles find each other,” explained Bryant to TAC. “It’s not a quantum leap that criminals of whatever degree of criminality find each other.”

The past twenty years bear this out. The Catholic Church engaged in a coverup that reached the heights of Rome to conceal the fact that parishes the world over practiced a systemic abuse of children that bordered on the satanic. Billionaire Jeffrey Epstein rubbed elbows with the most powerful of global elites while simultaneously operating a child sex trafficking ring and political blackmail operation for close to thirty years. In British cities like Rotherham and Telford, thousands of English girls were raped and sold into sexual slavery by Pakistani men who avoided prosecution for years due to fears of stoking racial animosity. A thirteen-year conspiracy of silence at Penn State University allowed coach Jerry Sandusky to molest at least half a dozen boys just to protect a beloved local football team. And only one week ago, authorities in Georgia liberated over three dozen children in a major sex trafficking bust outside Atlanta, and U.S. marshals located twenty-five missing and endangered children in Ohio.

According to the National Center for Missing and Exploited Children—created through an act of Congress in 1984 as a direct result of John Sr. and Noreen Gosch’s activism—more than one in six of the 23,500 endangered runaways reported to them in 2019 has likely been involved in child sex trafficking. The average age of victims is 15 years old.

There exists a preponderance of evidence that the depravity in our society—focused near the top—is darker and goes deeper than most people can possibly imagine. Faced with these facts, every person must to stop and ask themselves one central question: Do I believe in evil?

Hunter DeRensis is Assistant Editor at the Libertarian Institute and a regular contributor to The American Conservative. You can follow him on Twitter @HunterDeRensis.