After Trump Loss, ‘Deplorables’ Will Be the Democrats’ First Target 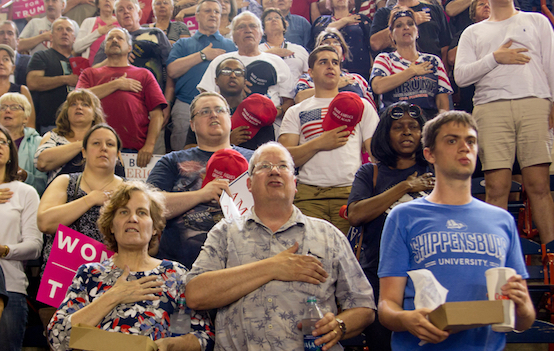 Blame the president for leaving his core supporters at the mercy of the opposition’s cultural and economic revolution.

If President Trump loses his reelection bid in November, as appears likely, the greatest victims of his presidency will have been his own constituency—the Americans who have given him his consistent but sub-par approval rating of between 39 percent and 43 percent throughout his tenure.

And when the new Democratic regime takes over, those people will become its target of choice.

We know who they are: largely white, more male than female, generally older than 45, largely blue collar, educated through high school but not much beyond, agitated particularly by U.S. immigration policies of the past few decades, with widespread feelings that their financial standing in the country has been increasingly constricted. They are nationalist in outlook, not globalist, with strong feelings of traditional patriotism of the kind that guided their parents and grandparents. They believe the nation’s elites—those with the power and money, who dominate the political discourse and set the national agenda—look down on them with contempt and view them as “deplorables,” in Hillary Clinton’s famous epithet.

Many of them don’t much care for Trump as a person. A Pew Research Center study during the 2016 primaries revealed that fewer than half of Trump supporters ascribed any favorable traits to him. Many didn’t consider him well informed, admirable, or even honest. But, based on their consistent support for the president over the past four years, it seems that they view him as standing between them and an emerging Democratic coalition, whose policy prescriptions pose an economic threat to them and would otherwise marginalize them in American society.

They see the Democratic Party lurching to the left and know that, should the Dems take complete power over the federal government in January, it will go even worse for them than it has over the past quarter century. U.S. borders will become more porous, largely through executive action. Asylum policies will be loosened up. Pro-immigrant legislation, such as free medical care for illegals, will serve as an enticement for greater illegal entry. A path to legal status, or even citizenship, will be pushed through. All this will devastate wage rates, thus harming the economic wellbeing of the Trump constituency. It also will serve over time to generate millions of new Democratic voters who will overwhelm the beleaguered white middle class.

The Democratic elite will resuscitate the free-trade policies of recent decades, thus reviving the deterioration of industrial America that Trump sought to reverse. The further evaporation of working-class industrial jobs will deliver another financial blow to his constituency. A likely return to humanitarian interventionism, meanwhile, will lead to new foreign wars, sap the nation’s resources, stir internal frictions, and pull the sons and daughters of Middle America into the maw of conflict.

Then there is the cultural onslaught in store for Trump voters when the Democrats take over. The brutal enforcement of political correctness has escaped the campus and invaded everyday America. This poses ominous implications for Trump voters, whose political leanings, though largely defensive in nature, are widely equated with racism, the most dangerous epithet that can be hurled at anyone in today’s America.

Trump supporters can see the shape of things to come when they witness Black Lives Matter protesters accosting people in restaurants and bars, yelling “silence is violence” into their faces and demanding gestures of support. They can’t miss the implications of protests turning into violent riots, with property destroyed, businesses obliterated, downtowns turned into war zones, even violence perpetrated on innocent people with the wrong views—all while police forces in cities throughout America, hobbled by anti-police zealotry (or intimidation) on the part of liberal local officials, stand by and watch. The Trump voters know that these small-business owners are people like themselves (though no doubt with a higher proportion of immigrants), whose security and livelihoods matter not at all to the cadres of destruction.

These people may not be as well-educated as the folks of the top 10 percent that constitute the core of the elites, but they’re not dumb. And they know that they represent the ultimate target, the final hardcore opposition to the globalist, open-border, free-trade, American exceptionalism, BLM, power-hungry elites of America. And, when they see windows smashed, businesses destroyed, cars ablaze, cities in chaos, and Democratic politicians ignoring all of it, they can’t help taking it a bit personally.

What went wrong? Trump went wrong. He built his constituency by exposing to America the fundamental political reality of 2016—namely, the widening chasm between Middle America and its bicoastal elites of big media, government officials, think tanks, big tech, burgeoning financial institutions, the federal deep state, and mavens of popular culture. He pulled his voters together into a tight knot of political support born of fear and intimidation and self-interest. But then he couldn’t build on it. He could never take his 43 percent support and find a way to add another 10 percent by devising policies designed to operate on the political margin.

Bill Clinton had a word for it—“triangulation,” meaning the art of building coalitions of people and institutions that constitute majority sentiment on well-chosen issues. A well-crafted grand strategy on immigration probably could have served the purpose, had there been sufficient compromise involved. A success on the health care issue would have helped. A big factor could have been a foreign policy success fulfilling the president’s promise of reducing America’s military footprint overseas. A use of language and a comportment signifying a sense of national unity, at least to the point of creating a majority coalition, could have helped tremendously—and would have been easy to do.

But Trump couldn’t do any of it. The result was that he couldn’t get beyond his core constituency and hence probably can’t be reelected. That likely will leave that core constituency in the lurch as the nation continues the politics of rancor, recrimination, and abuse under a new Democratic regime.