Different states have different levels of confidence about Election Day 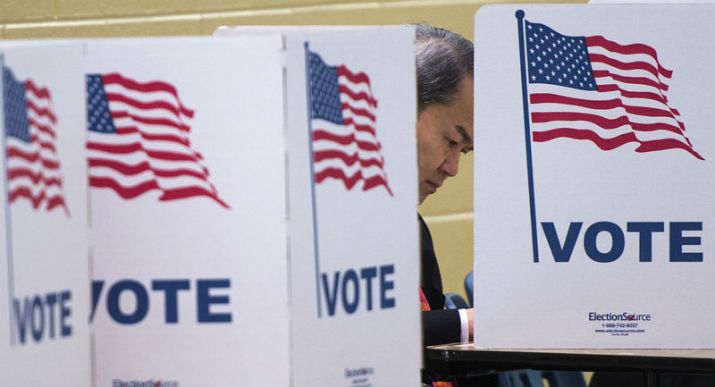 There are different levels of confidence within different states about when election results will be finalized. NBC’s Meet the Press held a roundtable with three officials today on what they could expect when the 2020 election will (finally) happen in November.

Ohio Secretary of State Frank LaRose seemed unworried about November 3rd’s election even though he expects a plethora of absentee ballots in his comments to Meet the Press:

[T]he thing that we’re thinking about more than anything right now is poll worker recruitment. It takes 35,000 Ohioans to run in person Election Day. And so we’re doing all we can to recruit those poll workers. And next, we’re making sure that we get accurate information out to Ohio’s voters. It’s just crucial that people have reliable information. That’s why your profession is protected by the very First Amendment. And that’s why one of my most important jobs is being that source of accurate and trusted information for Ohio’s voters.

The Republican did point out Election Night results are technically unofficial because of the aforementioned absentee ballots.

[W]e’re making it clear that the numbers that you hear on Election Night are never the final result, and that’s going to be even more so the case this year as we rely on more and more absentee balloting. We’re even changing the way that our Election Night reporting is done on our website to make it clear that there still may be tens or hundreds of thousands of outstanding absentee ballots. We expect those to come back in. Whether it’s one of my former military teammates who’s serving overseas, or maybe an Ohioan that just procrastinated and waited till the last minute, as long as those ballots are legally cast, they deserve to be counted. And so again, Election Night, yeah, we’ll give a snapshot of those results. But the final tabulation is what really matters.

I think North Carolina’s uniquely positioned for this because we, you know, began sending out absentee-by-mail ballots on September 4th to nearly 600,000 absentee requests that we had received. We are ahead of the game in sending out those ballots. That’s more time for voters to return them. We also have had in place for a number of years now the ability to process absentee-by-mail ballots in advance of Election Day. We also tabulate on Election Day the results from our one-stop early voting which we think will be about 50 percent of the ballots cast. We’ll have probably had 30 percent, 40 percent of the ballots cast absentee-by-mail. So even by the close of polls on Election Night, we may be reporting as much as 80 percent of our voter turnout and how they’ve chosen before — at the time that the polls close.

Brinson Bell also credited the June election as a good trial run for November while praising the work being done by county election workers.

Michigan Secretary of State Jocelyn Benson’s confidence appeared mixed regarding what could happen. She suggested Election Day could turn into Election Week due to a mixture of voting early by mail and going to the polls. From MTP:

[W]e’re increasing tabulators. We’re increasing capacity to more efficiently and securely count those ballots. But I’m also laser-focused on accuracy. And if it takes a few extra days to ensure we have a full and accurate counting of the results of every race, that’s what it’s going to take. And we’re going to be transparent throughout that whole process to make sure every citizen knows exactly where we are in the counting process and how many more ballots we have to get through.

The Democrat’s comments could be seen as hedging because she said a few minutes earlier this year had given the state time to, “hone this plan for November through three successful elections that we’ve had already this year where we’ve seen in every single one turnout has doubled.” Perhaps she expects even more turnout on Election Day since it is the “most important election of our time” (note sarcasm because all the other elections were also the most important election ever) and the system to be overrun with voters.

It’s likely the secretaries of state in Ohio and Michigan are simply playing partisan politics since they’re both elected positions. Benson flat-out blamed the Republican-controlled Michigan legislature for not giving her enough resources for November). North Carolina’s head of elections is not an elected official, although politics plays a factor in how the elections board is put together. A part of me doubts this since election fatigue is real and voter turnout keeps dropping (55.4% in 2016 and 53.4% in 2018). President Donald Trump and former Vice President Joe Biden are not great candidates meaning it’s likely turnout will go down again. Despite the “most important election of our time,” claims.

We’ll just see what happens in November, I suppose.