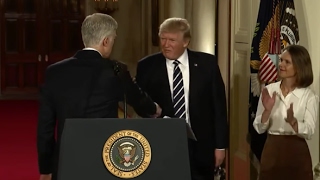 The nomination of Gorsuch, a 49-year-old federal appellate judge from Colorado, gives Trump and Republicans the opportunity to confirm someone who could cement the conservative direction of the court for decades.

Introducing Gorsuch, Trump said he had committed as a candidate to “find the very best judge in the country for the Supreme Court.”
“Millions of voters said this was the single most important issue for them when they voted for me for president,” Trump said. “I am a man of my word.”

“Today I am keeping another promise to the American people by nominating Neil Gorsuch to the Supreme Court.”