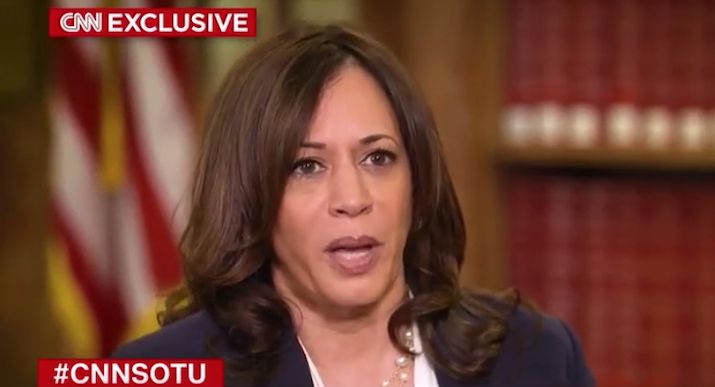 Alternate headline: Candidate checks electoral map, discovers why Pennsylvania’s called the Keystone State. At least Kamala Harris didn’t try to pretend that this was her position all along, as Joe Biden has for the last few weeks, but that doesn’t make this flip-flop much less crass. CNN’s Dana Bash sets this up as comfortably as possible for Harris, who now calls a fracking ban a “false choice” — even though Harris demanded one while campaigning last year:

BASH: President Trump, Vice President Pence, they have been campaigning more and more on the issue of fracking, which is a process of oil and gas drilling. They think that this is going to help them win votes in key states like Pennsylvania. Joe Biden has said — quote — “I am not banning fracking.” During your primary campaign, you said that you supported a ban. Are you comfortable with Joe Biden’s position?

HARRIS: Yes, because Joe is saying, listen, one, those are good- paying jobs in places like Pennsylvania, and, two, that we need to also invest and put a significant investment in the good-paying union jobs that we can create around clean energy, around renewable energy. And that is the kind of approach we need to have, but always understanding that it’s a false choice to suggest that we either take care of jobs or we take care of our environment. We can do both, and we should do both.

Funny…it wasn’t a “false choice” at CNN’s Climate Crisis Town Hall almost exactly a year ago. Harris didn’t even mention jobs when given a chance to come out in favor of outlawing fracking. Not only would she ban fracking, Harris told an anti-fracking questioner at the CNN town hall last year, Harris told moderator Erin Burnett that she would also ban all offshore drilling:

JESSIE BLUEDORN, CLIMATE ACTIVIST: Hi, thank you. My family lives in western Pennsylvania where fracked gas wells have become a common sight. Yet the toxic impacts of fracking on the community are immense.

BLUEDORN: From contaminated groundwater to poisonous emissions — will you commit to implementing a federal ban on fracking your first day in office, adding the United States to the list of countries who have banned this devastating practice?

HARRIS: There’s no question I’m in favor of banning fracking, so yes. And starting — and starting with what we can do on day one around public lands, right? And then there has to be legislation, but yes — and this is something I’ve taken on in California. I have a history of working on this issue.

And to your point, we have to just acknowledge that the residual impact of fracking is enormous in terms of the impact on the health and safety of communities — yeah, so thank you.

BURNETT: So would you ban offshore drilling?

HARRIS: Yes, and I’ve again, worked on that. You can — you can talk to the folks in Santa Barbara about the work that I’ve done there where it’s a big problem — but it’s a big problem in many areas of our country — and yes, I would. Yes.

Burnett replied at the time (not caught in the above clip), “All right, two very definitive answers.” So we thought at the time, anyway.

This should play directly into the Team Trump strategy to define Harris and Biden as dishonest pols who will say anything to get elected. Donald Trump himself said that was why Harris was his “number one draft pick” for Biden’s running mate:

THE PRESIDENT: Well, she lied. I mean, she said things that were untrue. She is a person that’s told many, many stories that weren’t true. She’s very big into raising taxes. She wants to slash funds for our military at a level that nobody has — can even believe.

It’s a bigger deal than Harris or Biden realized during the primaries. The question that Team Trump will pose in those energy-producing states will be whether voters can trust Biden and Harris to stick to their latest position — or whether they should expect the same radical-Left pressure that pushed them to support fracking bans in the primary will prevail after the election. Even better: why take that chance? Unfortunately for the American economy, that is no “false choice.”