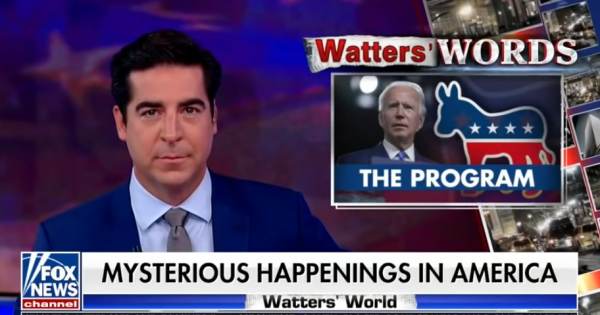 Jesse Watters on his Saturday night show on FOX News “Watters World” gave an excellent overview of what we are facing in America today as the 2020 election approaches.

The Democrats are behind the riots but somehow they are attempting to tie President Trump to the riots.  They at first hoped that the riots would be used against the President or ignored but it’s too late.  The riots are absolutely tied to Democrats in Democrat cities in Democrat states.  It is so bad CNN had to warn Biden to get out there and do something.

They want Americans to ignore what they see and how they feel:

…someone died in a swing state, Wisconsin, that forced Biden out of his basement.  Trump had already visited Wisconsin to tour the damage so Biden followed in the President’s footsteps.  Biden hadn’t visited Wisconsin in two years and when he showed up, nobody was there to great him.

They tell you that Biden is winning but where are his voters?  Biden spoke at a church but there were only about eight people there.  Earlier in the week he spoke in Pennsylvania and there were zero voters there, just six members of the media who agreed not to ask him questions.  They’re pretending something is out there that you can’t see.

Back to Wisconsin.  He was social distancing, so why’s he wearing a mask?  Isn’t Biden being tested?  He’s running on a pandemic that’s fading so he needs to keep up appearances, doesn’t he?  If Biden wears a mask at all times, even when he doesn’t have to, you think the pandemic is worse than it is….

Something very sinister is going on here…