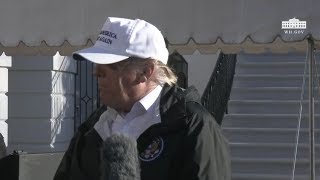 President Trump Holds Press Conference 1/10/19 Democrats Don’t Care. President Donald Trump chided the “fake news” for calling out his failed promise that Mexico would pay for a wall on its border with the United States, insisting he “never said” they would write a check for the structure. Trump, speaking to reporters outside the White House, said he believed the wall would “pay for itself every three or four months and maybe even better than that, in terms of overall.” He continued: “When during the campaign I would say Mexico is going to pay for it, obviously I never said this, and I never meant they’re going to write out a check. I said they’re going to pay for it. They are.”
As Trump spoke to reporters while leaving the White House for a trip the border, he was asked again about the possibility of declaring an emency if he cannot reach a deal with his congressional opponents for funding the wall. The president reiterated that he has the “absolute right” to do it even if he doesn’t want to yet, saying that would be the “easy route” compared to getting wall funding approved through Congress.
“This was passed by Congress. So when you say it wasn’t passed by Congress, it was. Other presidents have used it. Some fairly often. I have the absolute right to declare a national emergency. I haven’t done it yet. I may do it. If this doesn’t work out, probably I will do it. maybe definitely…If we don’t make a deal, I think it would be very surprising to me.”
Trump took questions from reporters on the South Lawn as he departed for his reluctant visit to the border. Jon Karl took the opportunity to get Trump on the record about the latest revelations about Manafort.
“Did you know Paul Manafort was sharing polling data from your campaign with the Russians?” Karl asked.
“No, I didn’t know anything about that,” Trump replied. “Nothing about it.”
“The Democrats, which I’ve been saying all along. They don’t give a damn about cre. They don’t care about cre. They don’t care about gang members coming in and sting people and people up. They don’t care about cri. And if they are not going to care about cre, then I agree, they shouldn’t do anything at but I care