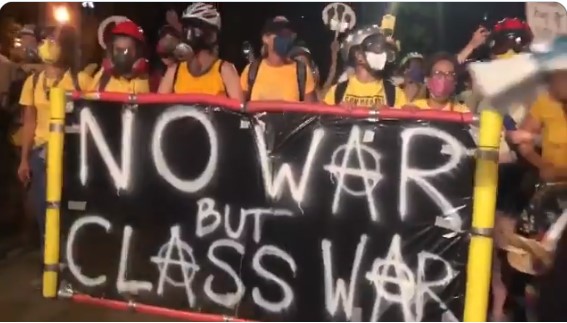 One of the fascinating facts to emerge from watching the back-to-back conventions was that Republicans have overtaken Democrats when it comes to visual presentation. Despite their lock on Hollywood actors, the Democrats don’t seem to have attracted much of the creative talent. The Democrat convention looked like a meeting of a high school communist club, while the Republican convention was a joyous, polished, light-filled vision of America’s wonderful future.

The difference in talent when it comes to creating videos and events applies to less spectacular events as well. When I look at my Facebook feed, which is heavily populated with Democrat friends from my travels through life, few of them put up any videos at all. This is not because they’re not political, because they are. It’s because they don’t seem to have anything floating across their computer monitors that’s worth posting.

It’s very different in the world of pro-Trump friends. My feeds, whether Parler, Facebook, or Twitter, are continually popping with superior videos that offer wisdom, humor, excellent video technique, and fun events. The GOP and its various entities (the Senate GOP, the House, GOP) as well as the Trump campaign itself, are also putting together tight, powerful videos.

I don’t know whether a lot of undecided voters ever see these videos. It certainly would be good if they would. Even if they don’t, though, the videos create strong rallying points for Trump supporters, helping them understand issues and reminding them why it’s so important to go, in person, to the polls on November 3 and cast their votes.

Today, I’ve got four videos I’d like to share with you. The first video pushes back at the Democrats’ recent efforts to tie Trump to the riots in the streets. Just to refresh your recollection, here’s what Biden had to say:

And now we have to stand against violence in every form it takes. Violence we’ve seen again and again and again, of unwarranted police shooting, excessive force, seven bullets in the back of Jacob Blake. Knee on the neck of George Floyd, killing of Breonna Taylor in her own apartment, violence of extremists and opportunists, right wing militias…

Biden’s mental frailty seems to have made him forget entirely about Antifa and Black Lives Matter. This video from Team Trump might remind him:

This next video explains why Nancy Pelosi’s visit to the hairdresser matters. She’s the most powerful woman in America and she has been hectoring Americans non-stop to destroy their lives in service to an increasingly limited viral threat. She also heads the political party that’s been most zealous about the lockdown, again beyond all reason:

The third video isn’t about clever, polished, and powerful filmmaking. In many ways, though, it’s more important. This video shows that the City of Portland has been hosting Antifa rioters in a well-laid out tent city:

Victoria Taft did the research and provides some background for the video:

Portland is wittingly or unwittingly housing some of the very same destructive rioters who have been tearing apart the city since May 28.

Let me repeat. The taxpayers are paying for their own demise and it’s all under the auspices of the city.

One month before the riots started, ostensibly to allow grieving over the death of George Floyd – remember him? – the City of Portland opened three homeless tent cities, one of which is the “Harbor of Hope.”

The city provides tents, sleeping bags, and privacy fencing around the 20-plus-unit tent city, which sits on open parking lots.

The cost for housing antifa and others is staggering. OPB reports that the start-up costs were nearly a million dollars with an ongoing $250,000 per month to support Harbor of Hope and another shelter.

It’s telling that so-called professional journalists, whether local or national, had no interest in how these people were managing to riot for three straight months. Instead, the Washington Post did a fashion spread on some of the rioters. It took a citizen journalist to make a video exposing something that should outrage every Portland citizen (but, seeing as it’s Portland, probably won’t).

And we’ll end with the wonderful Ricky Rebel, showing how a riot should be done: