Trump daring Dems to defend ‘critical race theory’ and 1619 project as he moves to suspend indoctrination in schools and govt. agencies 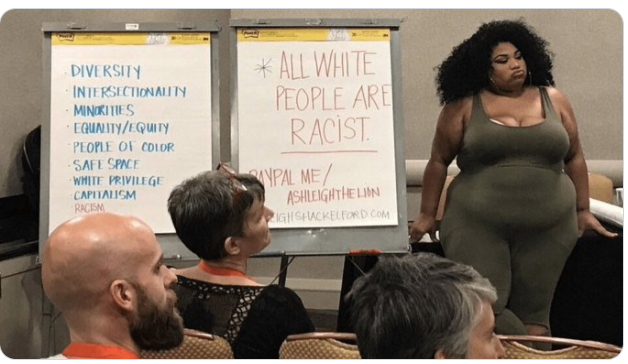 Democrats have made implicit promises to the radicals whose active support they need that they will back aggressive compulsory brainwashing sessions demonizing Caucasians and the American founding as fundamentally and inherently racist. A memorandum from OMB director Russell  Vought 3 days ago began the pushback and laid a trap for them:

The President has directed me to ensure that Federal agencies cease and desist from using taxpayer dollars to fund these divisive, un-American propaganda training sessions. Accordingly, to that end, the Office of Management and Budget will shortly issue more detailed guidance on implementing the President’s directive. In the meantime, all agencies are directed to begin to identify all contracts or other agency spending related to any training on “critical race theory/ “white privilege,” or any other training or propaganda effort that teaches or suggests either (1) that the United States is an inherently racist or evil country or (2) that any race or ethnicity is inherently racist or evil. In addition, all agencies should begin to identify all available avenues within the law to cancel any such contracts and/or to divert Federal dollars away from these un American propaganda training sessions.

This is Critical Race Theory in a single image. pic.twitter.com/8ZhljbXlvp

Yesterday, President Trump upped the ante by taking on California’s adoption of the inaccurate 1619 Project curriculum designed to instill hatred and resentment of the country on the phony contention that the funding was instituted to defend slavery,

Department of Education is looking at this. If so, they will not be funded! https://t.co/dHsw6Y6Y3M

The Department of Education has enormous power over local curricula through the denial of federal funds based on criteria of its own devising. Under Democrat administrations and the day-to-day rule of the bureaucrats, this power has been used to favor leftists. But it is also available to the Trump administration – at least until the Department of Education is abolished, as it ought to be.

By upping the stakes and taking on California, which regularly litigates against the federal government under Republican policies, Trump is goading Dems into the trap of defending racist, anti-White brainwashing.

Go ahead, make my day.