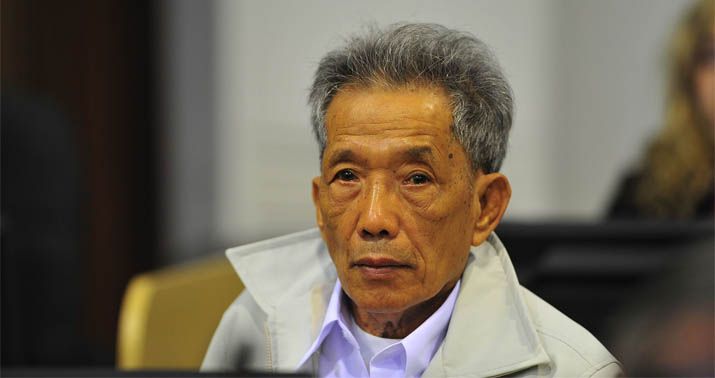 His name was Kaing Guek Eav but he was better known as Comrade Duch (pronounced doik), a teacher who joined the communist revolution in Cambodia and eventually became the head jailer at its most notorious prison. Last week he died in prison where he was serving a life sentence.

Duch led the regime’s Tuol Sleng prison, code-named S-21. He was one of the few Khmer Rouge officials to admit any responsibility for the 1975-79 genocide that ultimately left 1.7 million Cambodians dead from execution, overwork or starvation.

Only a handful of inmates survived their time in Tuol Sleng, a fact that he himself acknowledged during his war crimes trial. An estimated 14,000 people died there during the Khmer Rouge rule, some of them regime officials accused of disloyalty.

The NY Times adds that one of the key issues in his 2010 trial was a handwritten note:

One question hovered above the trial: the source of the “evil” — as he himself described it — that could have compelled him to scribble on a list of 17 children, “Kill them all.”

“How do human beings become part of a project of mass murder?” asked Alexander Laban Hinton, the author of “Man or Monster?” (2016), a book about Duch. “It’s too easy to dismiss people as sociopaths or psychos. Instead you really have to grapple with their humanity.”

The prison was liberated in 1979 though only 12 people were left alive at the time. It is now a museum/memorial to those who were tortured and killed there. From the museum’s website:

Prisoners slept on the bare floor without mats, mosquito nets, or blankets. All prisoners had to follow strict rules; otherwise, they were punished by flogging or electric shock, and the victims were not allowed to scream out in pain. Any action by prisoners even sitting up, turning over or relieving themselves required the permission of the Khmer Rouge guards. The crowded and poor hygienic conditions of the prison led to lice infestations and serious diseases.

At 4:30 am each day, prisoners were made to strip for inspection. The guards would check to see whether shackles were loose or if prisoners had hidden any objects they could use to commit suicide. Over the years, several prisoners managed to kill themselves, so the guards were very careful in checking the shackles and cells each day.

Most of the prisoners at S-21 were accused of betraying the party or the revolution, or of working for traitorous cadres who had already been arrested. With the passage of time, the Khmer Rouge leaders became increasingly suspicious and distrustful of their own cadres and soldiers. Some of the people who worked in S-21 also became prisoners. They „confessed“ to being lazy in preparing documents, to damaging machines and other equipment, or beating prisoners to death without permission when assisting with interrogations.

The interrogators at Tuol Sleng forced detainees to confess to the accusations with which they were charged. Often prisoners had no idea why they had been arrested, yet they were forced to confess their „crimes“ through torture. Among the forms of torture used were electric shock; submersion in water vats; and suspension from gallows with hands tied by rope behind the back until the onset of unconsciousness.

After confessing, prisoners were marked for execution. Those who survived their torture were killed initially nearby and later at the killing field of Choeung Ek, just outside the city. Often, prisoners were made to dig their own graves or the graves of other prisoners before being killed themselves with rudimentary weapons.

Nuon Chea, known as Brother Number 2, died in prison last year. Unlike Comrade Duch, he never confessed or apologized for his crimes. In a film about him, Nuon Chea said the goal of the revolution was to move the country “towards socialist prosperity.” He also said that part of their goal was to rid the nation of individualism. Despite the killing of more than a million people, he believed the revolution only failed because of outside interference.

Here’s an Australian report on Comrade Duch’s conviction ten years ago. Note that his initial sentence of 35 years was eventually extended to life. Below that is a video in which one of the few documented survivors of the camp, Chum Mey, tells visitors to the museum what he experienced there just a little over four decades ago.