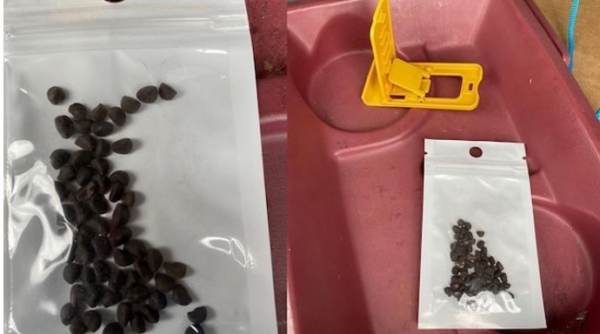 In late July, Americans across the country received unsolicited seeds from China in the mail. State and federal agencies advised against planting them.

But you know Americans. Lots of them planted the seeds anyway.

“According to documents obtained by Motherboard from state departments of agriculture, at least hundreds, perhaps thousands of Americans planted the seeds,” Vice reported.

“Based on documents I’ve read,” writer Jason Koebler wrote, “the scale of the mystery seed operation was much larger than I had originally suspected and than was originally reported. Conservatively, it is safe to say that tens of thousands of Americans received what they perceived to be Chinese mystery seeds in July. Some states, like North Carolina, had more than 1,000 people contact the department of agriculture having received unsolicited seeds. Others, like New Mexico, had roughly 100 recorded seed receivers. Many of these seed receivers, regardless of location, panicked.”

TRENDING: Black Georgia Man Who Stabbed Stranger Because He ‘Felt the Need to Find a White Male to Kill,’ Murders His White Cell Mate Following His Arrest

Koebler recounted a phone call from someone who called the New Mexico Department of Agriculture.

“About a month ago, I did receive seeds from China. I guess China because it looks like Chinese writing. I thought, ‘Oh cool, maybe Burgess seeds or one of the seed companies send me some seeds.’ And, umm, like a dumbass, I planted them, not knowing there was a problem,” a woman in New Mexico said in a voicemail left with the state’s department of agriculture in late July. “And now, I’ve been battling this for a couple weeks. Now, where I planted them, and I remember where I planted them, everything that’s in the garden where I planted them are having a hard time and are starting to die … I really don’t know what to do at this point, so could somebody call me back and give me a little bit of direction about this? I know I’m a dumbass.” …

He also looked into reports from Michigan.

According to a spreadsheet compiled by Michigan, 677 people filed official complaints with the state about the receipt of unsolicited seeds; 30 reported planting them. “I planted them in my hydroponic system in my home, I thought they were the strawberry seeds I ordered from Amazon. They turned Black and green mold so I threw them away,” one person wrote. “If I had known these seeds were going to originate from China, I would not have purchased them from Amazon. I am still waiting on at least 4 other orders of seeds. Will burn them if they come.”

A Utah plant lab analyzed many of the seeds and said they do not appear harmful. “Our seed lab has identified the following: rose, amaranth (not Palmer), 2 mints, False Horse Balm, Self Heal, Lespedeza and Sweet Potato. Our APHIS-PPQ plant health director wants us to destroy the seeds by sterilization or incineration,” the person who analyzed them wrote.

One man in Arkansas decided to plant some of the seeds to see what grew.

“Before word got out, a man in Booneville planted the seeds and they’ve been growing in his garden for two months,” CBS-TV affiliate KSFM reported. “We brought them down here and planted the seeds just to see what would happen, every two weeks I’d come by and put Miracle Grow on it and they just started growing like crazy,” Doyle Crenshaw told the station.

“The plant has a large white fruit and orange flowers, much resembling a squash plant,” KSFM said.

The Virginia Department of Agriculture and Consumer Services issued a statement about the shipments, which reads in part:

The Virginia Department of Agriculture and Consumer Services (VDACS) has been notified that several Virginia residents have received unsolicited packages containing seeds that appear to have originated from China. The types of seeds in the packages are unknown at this time and may be invasive plant species. The packages were sent by mail and may have Chinese writing on them.

Please do not plant these seeds. VDACS encourages anyone who has received unsolicited seeds in the mail that appears to have Chinese origin to contact the Office of Plant Industry Services (OPIS) at 804.786.3515 or through the [email protected] email.

Invasive species wreak havoc on the environment, displace or destroy native plants and insects and severely damage crops. Taking steps to prevent their introduction is the most effective method of reducing both the risk of invasive species infestations and the cost to control and mitigate those infestations.