What If Those Who Were in the Riots Were Different? 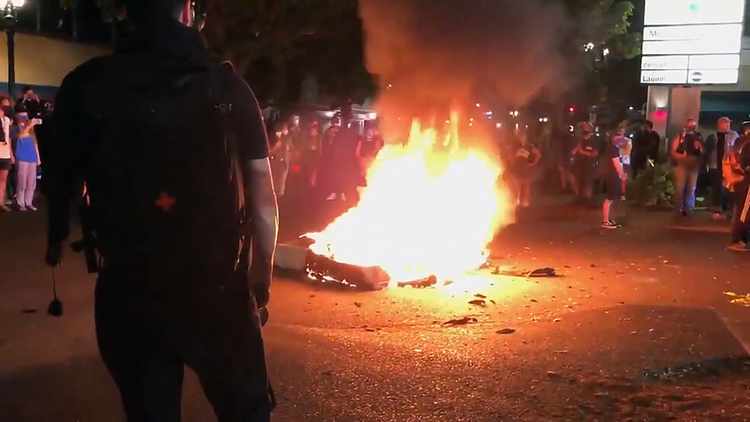 Do you want to play a game?

It’s politics with a twist. That game of “what if?” you played as a kid:

So, what if, rather than liberal Democratic mayors in Democratic towns being overwhelmed by violence, things were reversed?

What if these were Republican mayors, in red states, overwhelmed by violent protests from the right wing, confronted by people in MAGA hats or those middle-aged anti-tax tea party activists who always seemed to clean up after themselves when they protested?

What if they were the ones rioting, burning and looting during their “mostly peaceful” protests, with bail money for the arrested provided by the staff of a Republican presidential candidate, and media making it clear there was great political value in the violence?

And what if those Republican activists confronted fellow citizens in restaurants, shouting at them, demanding they demonstrate fealty to their politics by raising a fist?

What if Republican mayors, rather than restore order in their ruined cities and towns, just hid in publicly subsidized fortresses, or bunkered behind police walls while the rest of you were left on your own, and then those mayors just ran off?

Would the media — and I don’t mean just the Democratic Corporate Media Complex along the Washington Beltway but also conservative journals such as National Review and The Federalist — give the Republican candidate a pass?

For me, the answer is easy. No.

But all this is going on now isn’t it, in Democratic cities, with Democratic presidential politics driving it?

It was Democratic presidential candidate Joe Biden’s staff that raised bond money for rioters in ruined Minneapolis, back when his campaign saw the street anger as politically beneficial. Biden floats like a cork on the sea roiled by the hard left that runs his party. And Republican President Donald Trump hammers him for it.

“We have not lived at home for two months,” Krewson told the St. Louis Post Dispatch. “We did it to de-escalate the situation … and importantly because our neighbors were being disturbed and threatened.”

Portland Mayor Ted Wheeler fled his home from riots there that never stop. The Oregonian reported that Wheeler apologized to his neighbors for the damage to his home.

“I want to express my sincere apologies for the damage to our home and the fear that you are experiencing due to my position,” according to a screen shot of his email to neighbors. “It’s unfair to all of you who have no role in politics or in my administration.”

Chicago Mayor Lori Lightfoot had the street in front of her home turned into a “no protest” zone, and at least had the guts not to apologize.

But Minneapolis Mayor Jacob Frey was shouted down by Black Lives Matter protesters when he dared not support the elimination of the Police Department.

Frey was forced to slink away, another example of a liberal Democratic mayor devoured by the hard left. Now in blue-state Minnesota, Democratic mayors in the Iron Range abandon Biden to endorse Trump, according to the Duluth News Tribune.

I say “What if? What if?” and many of you who disagree with me will say “What about? What about?” accusing me of the secular sin of whataboutism. I get it. Most of us are locked into our views.

But not all Americans swim in the Twitter sewer, fighting the cultural and political wars.

Many are not politically involved. They’re frightened by anarchy. They just want to work, walk down the street, barbecue some ribs and not worry about getting hurt.

Unfortunately for some of you, I’m old now, old enough to remember editors assigning stories years ago, when the tea party began to oppose federal taxation.

We were assigned to write about the “anger among the electorate.” That was the driving theme, when voters rose up to oppose Democratic Party rule. There were countless stories about it then, offered as objective news, and analysis. Conservative anger against Democratic policy was presented as irrational and dangerous.

In September 2009, roughly 10,000 tea partyers descended upon New Lenox in Will County to protest a federal government they felt had left them behind and ignored them. But the most the police had to deal with was a traffic jam along Interstate 80, not violence.

Yet now the anger out there is, if not excused, then mitigated, as a response to Orange Man Bad who denied Hillary Clinton and her establishment Democratic wing their place in American history.

The hard left wing of the Democratic Party drives things and Biden dare not condemn them.

You can read all this on the boarded-up downtown storefronts, on the broken glass, in the smell of burned buildings in many cities. You can read it in the ruined garden of the mayor of liberal Oak Park, Illinois, The People’s Republic of Oak Park, the suburb just west of Chicago.

He didn’t listen hard enough to the “defund police” contingent in town or act fast enough, apparently. His family was threatened. The exterior of his home was trashed. I heard him in an interview pleading for calm, for de-escalation. He wouldn’t demand arrests.

He just couldn’t. He lives in a liberal Democratic town.