X-OUT: ‘TED Talks’ Refers To Women as ‘Womxn’ To Include Trans Men

The elitist pomposity behind the phrase “TED talk” has definitely become a point of pop culture mockery in recent years, though the latest social justice initiative put out by the non-profit group that peddles in self-important presentations about tech, science, creativity etc. really amplifies just how unhitched from reality our intellectual class has become. 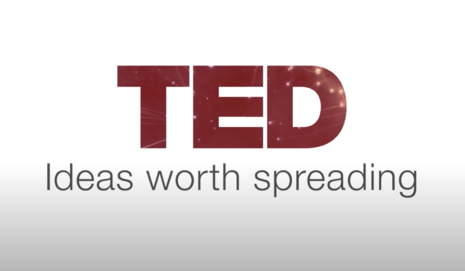 TEDxLondon, a division of the group based across the pond, recently tweeted about its new female-focused content that’s not particularly female-focused when you really think about it. The group’s Twitter account promoted its upcoming series of events called “TEDxLondonWomxn.” Uh, did they misspell woman?

Well yes, but as with all highfalutin social commentary these days, it’s by nefarious design.

On September 4, the TEDxLondon Twitter account announced its upcoming virtual plans for the fall, tweeting, “HELLO YOU! TEDxLondonWomxn is coming back (virtually)! And we’d love you to share your ideas to help us to build our programme of events for this Autumn…”

Of course, one eagle-eyed Twitter user pointed out the strange spelling of woman in the upcoming panel and asked, “what is a womxn?” Clearly, not everyone took the time nor money to get their gender-studies degree (something these angry, privileged lefties never take into consideration.)

Speaking of classes no one took: an English class on how to pronounce words like “womxn.”

However, TED, which we all know is dedicated to saving the world one overly long and pedantic  presentation on tying shoes at a time, decided to answer said question with one of the wokest answers ever. You see, “womxn” is a new, waaaaay more inclusive version of the term woman. It’s so inclusive that it also kind of destroys the whole concept of womanhood altogether.

As TEDxLondon explained to the poor victim, “Why we’re using ‘womxn’ No, that’s not a typo: ‘womxn’ is a spelling of ‘women’ that’s more inclusive and progressive.” They sound very proud of themselves, don’t they? The account added, “The term sheds light on the prejudice, discrimination, and institutional barriers womxn have faced, and explicitly includes non-cisgender women.” 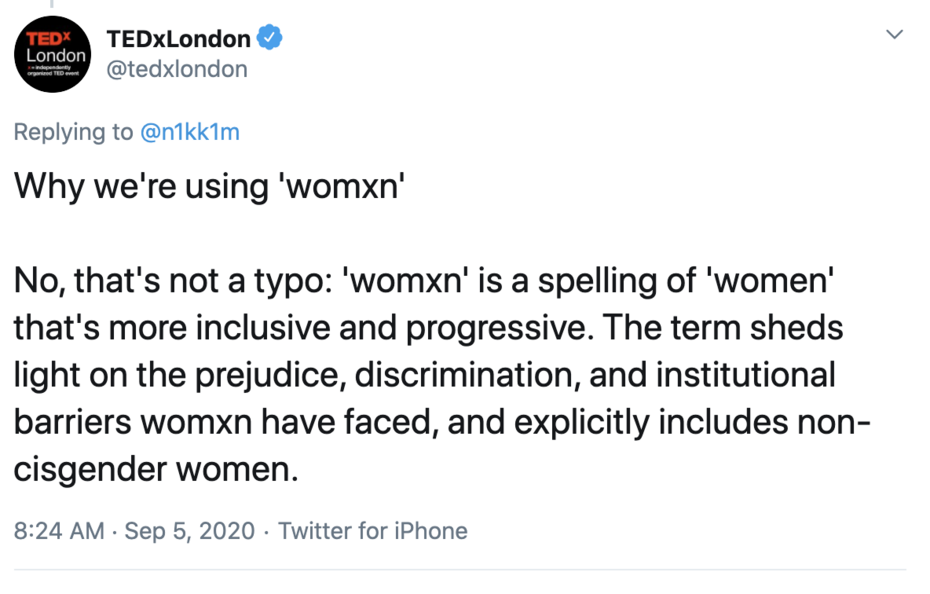 Basically, “womxn” describes all female-identifying people, to include gay, lesbian and transgender women, who of course are still biological men. Yes, “womxn” exists to destroy the prejudice that men face when they try to identify as female. The dictionary is a terrible, evil entity, but not anymore.

Though several users pointed out the implicit irony of the new-fangled term: that the term “womxn” obscures the specific term for biological women. Conservative influencer “Freckled Liberty” responded to TEDxLondon’s tweet, asking, “Why should the word ‘woman’ be modified to include non-women?” Another user followed up with the point that “Jk Rowling was right. Just another way to erase the struggles women face.”

Rowling, the author of the Harry Potter series, generated controversy earlier this year for standing against trans activism, arguing that much of it denies the specialness and exclusivity of the biological female experience. Rowling argued “If sex isn’t real, the lived reality of women globally is erased. I know and love trans people, but erasing the concept of sex removes the ability of many to meaningfully discuss their lives. It isn’t hate to speak the truth.”

The author was dragged for it online, but her point is a compelling one: that terms like “womxn” are so inclusive that the whole concept of womanhood ends up getting lost in the shuffle.