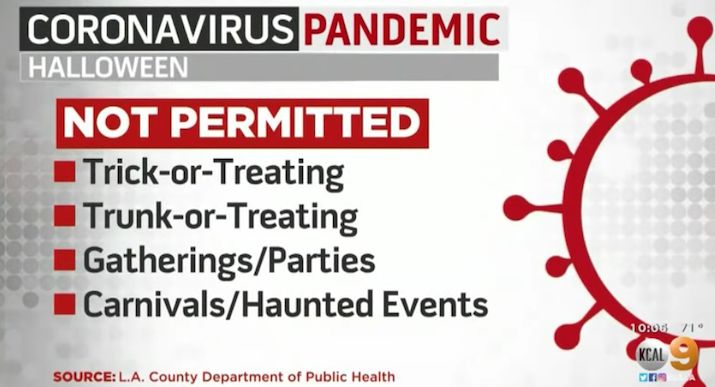 What presents a bigger transmission risk — kids in masks on porches, or massive numbers of adults crowding into public squares and shouting slogans? Los Angeles County health officials chose the former, declaring a ban on Halloween trick or treating to prevent the spread of COVID-19. This was probably not going to be a big year for trick or treating anyway, but a formal ban on candy collection raises some questions about government power and its arbitrary applications:

It’s not just trick-or-treating, as KCAL-9 points out in the above report. “Trunk or treating” is also banned, even though it takes place in the open air away from porches and houses:

“Door-to-door trick-or-treating is not allowed because it can be very difficult to maintain proper social distancing on porches and at front doors especially in neighborhoods that are popular with trick or treaters,” the Los Angeles County Department of Public Health said in its recently released guidelines. “‘Trunk-or-treating’ events where children go from car to car instead of door to door to receive treats are also not allowed.”

Gatherings or parties with non-household members are not permitted, even if held outdoors, and neither are carnivals, festivals, live entertainment or haunted house attractions.

So what can families do to safely celebrate the spooky holiday?

They can participate in online parties and contests, such as costume or pumpkin carving; car parades that comply with public health guidance for vehicle-based parades; Halloween movie nights at drive-in theaters; Halloween-themed meals at outdoor restaurants; Halloween-themed art installations at an outdoor museum; and decorating homes and yards with Halloween-themed decorations.

Will we participate in trick-or-treating this year? My wife’s immune suppression makes that too risky, even with masks. Even without that as a concern, I would be hesitant as a parent or grandparent of small children to take them door to door for Halloween this year. The risks of transmission in a pandemic are significant and rational enough to have everyone reconsidering that prospect in 2020 — as part of their own personal choice.

That, however, doesn’t require government to impose bans on social activities, especially when those bans are outrageously arbitrary. For instance, has LA County banned all front-door solicitations? Are door-to-door sales banned, too? Political door-knocking? The ban on “trunk or treating” is even more absurd. People put groceries in their trunks and cars every day. If masks are worn and enough care is taken, what is the grave risk involved in that kind of transitory outdoor activity? Where is the evidence of heightened risk that rises to the level of government intervention?

And the ban on outdoor gatherings is not just absurd but also the height of hypocrisy. Has anyone “banned” the protests taking place nightly in south LA over the police-shooting death of Dijon Kizzee?

Another 17 people were arrested Tuesday, marking the third straight night of protests outside the South Los Angeles Sheriff’s Station over the controversial shooting death of Dijon Kizzee.

The arrests came after an unlawful assembly was issued at about 8:15 p.m., according to Deputy Trina Schrader of the Los Angeles County Sheriff’s Department.

The “unlawful assembly” was only declared after the so-called “mostly peaceful” demonstrators began chucking rocks and other objects at police. Health officials have not banned these “outdoor gatherings” yet, and those pose a lot more risk to public health than a properly social-distanced garden party in someone’s backyard. Would police have arrested them before this if they had started passing out candy from car trunks?