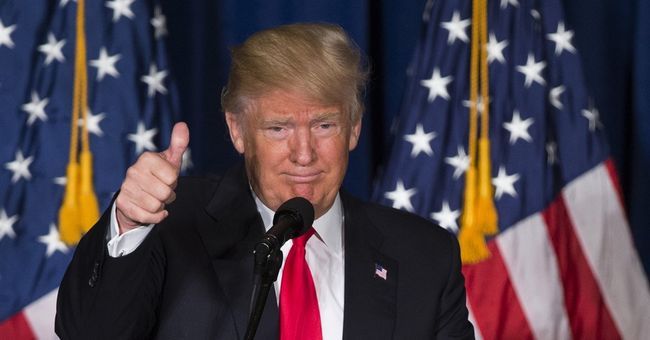 President Trump held a press conference Monday at the White House. When he opened it up for questions from the White House press corps, things got a little weird.

Reuters’ White House reporter Jeff Mason was called on and began to ask a question. President Trump stopped him and asked him to remove his face mask. The president explained that Mason sounded “muffled”. The reporter started to honor the request, he put his hand up to his mask as though to remove it, then stopped. He said he would speak louder.

“You’re going to have to take that off, please. You can take it off. How many feet are you away?” the president said.

Mason declined to remove his mask, but offered to “speak a lot louder.”

“Well, if you don’t take it off — you’re very muffled,” Trump responded, “so if you would take it off, it would be a lot easier.”

Mason again offered to speak “a lot louder,” and raised his voice as he asked Trump “Is that better?”

.@realDonaldTrump scolds a reporter for wearing a mask:

“You’re going to have to take that off, please.

How many feet are you away? Well, if you don’t take it off, you are very muffled. So, if you would take it off it would be a lot easier…” pic.twitter.com/64l8N0yLdq

Later, when two other reporters removed their masks to ask questions, Trump noted how clear they sounded. “… so clear…as opposed to everybody else, where they refuse.”

That’s a problem with face masks – they make a normal conversation more difficult. They do muffle voices. When someone speaks to us, our eyes tend to move down to watch the other person’s lips as they speak. That’s not possible if the person is wearing a face mask.

It hasn’t been that long ago that the White House press corps attended daily press briefings and press conferences without wearing masks. I remember when reporters first began wearing them at the White House. Mason had one on and when he was called on during a press conference, President Trump ribbed him a little about being politically correct. It was an innocent exchange. The exchange Monday, however, looked as though Mason was just trying to defy the president. Trump was polite and said “please” when he asked him to remove it.

Some press reports of the incident claim Trump did it as retaliation for the question Mason was trying to ask. He asked about the president’s trip to France in 2018 and the phony manufactured scandal that Trump trashed veterans and the military during that trip. If it was any other president and if we were not less than two months out from a presidential election, this vicious kind of story wouldn’t be a part of the news cycle. But, it’s Trump and he’s looking pretty good in his re-election bid, so he must be stopped by the press, the propaganda wing of the Democrat Party.

Here’s an example from Deadline:

President Donald Trump spent much of his Labor Day tweeting about an article in The Atlantic that painted him as dismissive of American soldiers who died in battle and unwilling to visit their graves. The most explosive claim in the piece is that Trump called fallen soldiers “suckers” and “losers,” something that he denies.

It’s not a surprise, then, that he seemed piqued when asked about the article in a news conference on Monday.

As Reuters’ White House reporter Jeff Mason, who was wearing a mask, began to ask his question, Trump interrupted.

Mason asked his question. “Mr. President, some people are having a hard time believing your denial of the Atlantic story because of what you said about John McCain. Do you understand that?”

“The story is a hoax,” said Trump of the Atlantic piece. “Written by a guy who’s got a tremendously bad history…It’s a made up story. It’s a totally made-up story.”

Trump then spent four minutes trying to refute the Atlantic piece, saying that “15 people have come out” to verify his version of the events.

While Mason says “some people” are not believing the president’s denial, plenty of people do believe the president, which is something the biased press doesn’t understand. Even people who don’t pay very much attention to politics on a regular basis have seen Trump’s participation in military ceremonies and graduations. It has become a regular ritual for him to stay after he speaks and shake the hand of every graduate at the end of the ceremony. He did it at the U.S. Naval Academy graduation and the Air Force Academy long before he was running for re-election. Trump’s beef with McCain was personal, it was separate from McCain’s military service. The way Trump speaks is already well-known to his supporters.

Trump rightly pointed out to Mason that there was enough distance between him and the president that he could safely remove the mask. Two other reporters did so. How many interviews have you seen where a reporter is seated a few feet from Biden or Kamala? Not a peep is said when their interviews are conducted maskless. They are socially distanced, just like Trump was at the podium during the White House press conference.

In this case, it looked like Mason was grandstanding. He should have either spoken louder in the first place or just removed his mask for however long it took to ask a question.