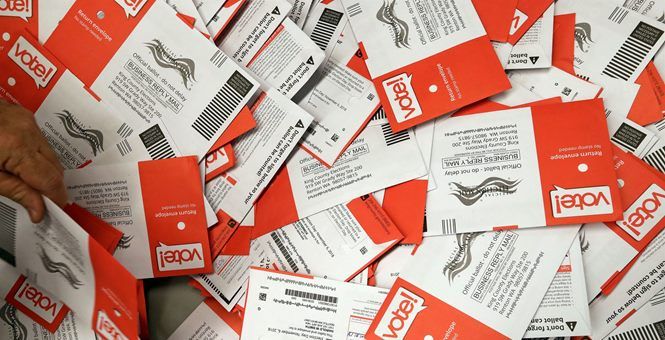 U.S. District Judge Orlando Garcia, a Clinton appointee, has ruled that one part of the mail-in ballot process in Texas must be fixed before the November election. He found that the signature verification process is unconstitutional. Garcia ordered that a fix is put into place immediately.

The voter’s signature must be checked on all mail-in ballots, which means the signature on the ballot envelope and the voter’s signature on the ballot application must match in order for that ballot to be counted in an election. Judge Garcia says this process that is currently in place “plainly violates certain voters’ constitutional rights.” He has ordered the Texas secretary of state to notify local election officials, within the next ten days, that it is unconstitutional to reject ballots over a “perceived signature mismatch” without first notifying the voter and giving him/her a “meaningful opportunity” to correct the issue.

But wait, there’s more. There is always more, right? In order to protect voter rights in the upcoming election, the secretary of state must also “advise local election officials that mail-in ballots may not be rejected using the existing signature comparison process, or notify them that they are required to set up a rejection notification system that would allow voters to challenge a rejection.” It sounds like the federal judge would just like to toss out the signature verification process altogether.

This kind of convoluted ruling squares with Democrats crying that mean Republican state officials are trying to suppress votes in the presidential election. As a little background, this ruling is in response to a lawsuit filed more than a year ago by two voters who claim their ballots were rejected over mismatched signatures. Others joined in the lawsuit – Texans with disabilities, veterans, and young voters, and they claim the local election officials having the right to reject ballots due to signature discrepancies violates the 14th Amendment.

In his order, Garcia agreed and said the state is creating a “severe” burden for voters whose ballots are rejected because they are given late notice of that rejection and are not offered a “meaningful opportunity” to “cure” their ballots.

“As a result, those voters face complete disenfranchisement, and thus, their right to vote is at stake,” Garcia wrote.

Texas does not mail out ballot applications to all registered voters. In order to receive a mail-in ballot, Texas voters must meet specific qualifications, such as being age 65 or older, out of the county during the election period, disabled or ill, or in jail but eligible to vote. Activist Democrat elected officials, like the Harris County Clerk Chris Hollins, are determined to blanket the county with mail-in ballot applications. Democrats want to scare voters and create doubt surrounding election results, especially should President Trump win re-election.

The verification process is conducted by a committee of local election officials who review them to make sure the signature on the flap of a ballot envelope matches the signature that voters used on their application to vote by mail. The committee can also compare the signature to signatures on file with the county clerk or voter registrar made within the last six years. That sounds pretty straightforward, right? Critics say that because no standard for review is established, the law is applied unequally. The claim is that each county “necessarily” develops “its own idiosyncratic, arbitrary, and ad hoc procedure to determine that a ballot should be rejected”. There is no requirement to notify voters about the rejections until 10 days after Election Day. Therefore, a voter may or may not know a ballot has been rejected until well after the election has taken place.

The solution, according to the federal judge, is to just stop rejecting ballots over signatures. The only alternate idea he offered is to put in place an“immediate remedial plan”. This would require election officials to notify the voter within one day of finding an alleged mismatch and allowing the voter to challenge the rejection.

Under that plan, voters must be mailed notices of rejection within one day of a mismatch determination by the local review board. Those who provided phone numbers on their applications must be called at least once within one day of the decision.

The timing of the judge’s ruling is suspect. Ballots are almost ready to be mailed out for the November election. Local officials are expecting a marked increase in voting by mail this election. Why wait until just before the election to rule on a lawsuit that was filed over a year ago? It looks as though the judge is part of those looking to create havoc just before an election. Are the numbers high for those rejections? Not really. The number is relatively small, which would indicate the system really doesn’t have problems.

In the lawsuit, the plaintiffs claimed that at least 1,873 mail-in ballots were rejected on the basis of mismatched signatures during the state’s 2018 general election; at least 1,567 were rejected in 2016.

In the State of Texas, those numbers aren’t big. Every vote should count, of course, but that applies to legal votes. Signature verification is a step to prevent voter fraud. The fact that this hasn’t been an issue in past elections indicates it really isn’t an issue now, either.