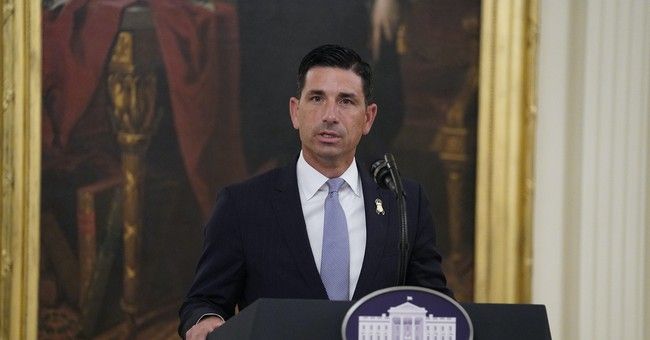 Tricky business in that the whistleblower, Brian Murphy, claims he was demoted because he refused to comply with the corrupt demands made of him. Was that demotion truly retaliatory or does Murphy have an axe to grind? Of note: “Murphy was removed from his position at DHS and assigned to a management role in July, following reports by the Post that his office had compiled ‘intelligence reports’ about tweets by journalists who were covering protests in Portland, Ore.”

It’s also tricky in that it sounds like something Trump’s cronies would do, which of course isn’t the same thing as saying they actually did it. I’m skeptical of Chad Wolf and Ken Cuccinelli just because both have been serving in “acting” capacities at DHS for many months, a fact that should make them especially eager to remain in the president’s good graces. In a normal administration, where all major executive-branch officers have to be confirmed by the Senate, the president will think twice about replacing one who falls out of favor lest he and his nominee have to endure a long, bruising confirmation process. In this administration, with McConnell and the Senate GOP having completely abdicated their advise-and-consent duties, Trump can replace Wolf or Cuccinelli at a moment’s notice with a new “acting” director via some procedural chicanery. So yeah, the two of them would have extra incentive to make sure nothing’s coming out of DHS that might irritate the president. He can always find some more abject crony to handle his business if they can’t.

Murphy makes various claims in his whistleblower complaint. Wolf, he says, told him to stop producing assessments on the threat of campaign interference by pro-Trump Russia and to focus more on the threat from pro-Biden China and Iran. Allegedly that request originated with Trump’s NSA, Robert O’Brien, with Wolf once going so far as to ask Murphy to “hold” an intel analysis of Russia because it made Trump look bad. What’s wrong with paying more attention to China and Iran? Well, reportedly, the threats from the three countries aren’t equal.

A statement by the U.S. intelligence community last month, released after pressure from Democratic lawmakers pushing for more public transparency, said Russia has undertaken a broad effort to damage Democrat Joe Biden’s bid for the presidency…

Mr. O’Brien last month publicly alleged Chinese hackers were targeting U.S. election infrastructure in the lead up to the election, making a new claim about the level of Beijing’s activity in the election.

Mr. O’Brien’s comments were met with skepticism by other officials familiar with the matter, The Wall Street Journal reported at the time. While China has an active interest in the election, the U.S. doesn’t currently have intelligence showing that Beijing is directly trying to hack election-related systems, the officials said.

Russia has allegedly been pushing Trump-friendly messages online about the fraudulent mail-in voting and Biden’s mental acuity. Is O’Brien overstating China’s support for Biden to make Russia’s support for Trump seem less glaring and alarming, or is the dreaded “deep state” within the intelligence community overstating Russia’s support for Trump to make him look bad? Tricky business. But note that former DHS spokesman Miles Taylor claims that Trump once got so angry at a DHS official for supporting intel assessments that Russia interfered in the 2016 campaign that he threatened to fire that official before being talked out of it. Russian campaign meddling is a famously touchy subject with him and Wolf and Cuccinelli would have every reason to know it.

Murphy also claims that Wolf and Cuccinelli encouraged him to downplay the terror threat from white supremacists and emphasize instead the threat from left-wing groups, in keeping with Trump’s campaign focus on the rioting in Portland and elsewhere:

The complaint also alleges that Wolf and Cuccinelli, both Trump appointees, directed officials to change intelligence assessments to ensure they matched up with misleading public comments from Trump about Antifa and “anarchist” groups, according to a complaint filed with the DHS inspector general.

Separately, both Wolf and Cuccinelli also tried to alter a report to downplay the threat posed by White supremacists and instead emphasize the role of leftist groups due to concerns about how the initial language would reflect on the President, according to a source familiar with the claims raised by the whistleblower…

[Murphy] refused to alter the draft versions of the report warning of the threat posed by White supremacists, prompting Wolf and Cuccinelli to halt work on the document, the complaint states.

A source told CNN that it was indeed Wolf and Cuccinelli that moved to block the report on domestic terror that Murphy had been working on. Supposedly there are different drafts of the report that show language about white supremacists being changed to refer instead to “domestic violent extremists,” a vaguer and more anodyne term. That jibes with something that Elizabeth Neumann, a former DHS specialist in threat assessments, told NPR recently. She says that after the El Paso massacre last year, her agency requested more funding to fight domestic terrorism. White House aides were fine with that, but only on the condition that she present the request as a way of “preventing violence.” Why not frame it explicitly in terms of fighting terror? Quote: “They seem to understand that for whatever reason, if we use the term ‘domestic terrorism’ or we talk about the white supremacist language, that seems to derail things at the White House.”

That’s not even all of it. Murphy *also* claims that former DHS chief Kirstjen Nielsen perjured herself before Congress last year when she was asked how many known or suspected terrorists had crossed into the U.S. from Mexico. Murphy says he was pressured to provide intelligence supporting a huge number, to bolster Trump’s case for the border wall. In the end, though, he could find evidence of only three suspected terrorists crossing illegally. Nielsen claimed the number was more like in the thousands. House Democrats want to talk to her, but first they’re going to talk to Murphy himself on September 21.

Is there any evidence to corroborate any of this? Yep, says Murphy. He complained to numerous people at the agency as these corrupt requests were made of him.

Murphy first raised concerns about pressure on Russia-related intelligence to undersecretary David Glawe in March 2018, returning to him repeatedly until Glawe’s retirement in May 2020…

Murphy made similar disclosures in 2018 to then-Deputy Director of National Intelligence Sue Gordon, in 2019 to then-assistant national security adviser Sarah Tinsley and six times earlier this year to acting deputy DNI Kash Patel, according to his complaint. And in mid-April he raised his concerns to Wolf and Cuccinelli, which was followed a month later by Wolf’s admonition to change focus to Iran and China.

I’m guessing Democrats will want to talk to all of those people too. In lieu of an exit question, I’ll leave you with this short but trenchant Twitter thread from Julian Sanchez making the point that, if Murphy’s telling the truth, the problem here isn’t “just” a matter of federal officers cooking intelligence to boost the president’s electoral agenda. It’s a matter of applying resources as well. If you have reason to believe Russia is meddling more aggressively than China or Iran is and yet you feel compelled for political reasons to spend equal time on China and Iran, then by definition you’re not allocating time and energy proportionately to the true threat. Russia ends up with more freedom to behave badly than it otherwise should have, conveniently to the president’s advantage.