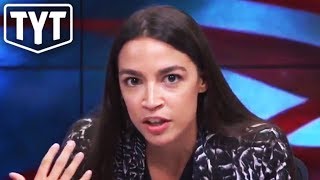 The wait is over: the TYT Plus app is now available for Android users! Download the app by searching TYT Plus in the Google Play store or by going to http://TYT.com/app.

Fox News is in full panic mode. They should be. Cenk Uygur, Ana Kasparian, Alexandria Ocasio-Cortez, and Nando Vila, hosts of The Young Turks, discuss.

“Sometimes, you get an indication that someone on Fox News is getting high on their own supply. Or maybe Sean Hannity’s graphics team is just getting sick of him. But it seems more likely that President Trump’s late-night-phone-companion is so deep into the Lib-Bashing Vortex that he is starting to lose his grip on things. The result is that, Wednesday night, Hannity found himself bashing a political platform that included “support seniors” and “clean campaign finance.”

The segment was designed to attack the platform of Alexandria Ocasio-Cortez, the 28-year-old Democratic Socialist who defeated a titan of the New York Democratic machine in a primary Tuesday night. At one point, Hannity’s production team decided to throw up the policies on the screen behind him. Except they failed to run the graphic through the normally rigorous process of Fox News scaremongerization and white-resentment optimization. They just put it up there, spin-free, and it looked…pretty reasonable?”*

Download audio and video of the full two hour show on-demand + the members-only post game show by becoming a member at http://www.tytnetwork.com/join/. Your membership supports the day to day operations and is vital for our continued success and growth.