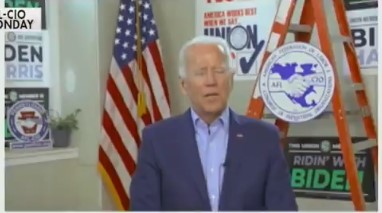 The year 2020 will not go down in history as anyone’s favorite year.  It had something for everyone in terms of the misery factor.  Moreover, when I think about the misery inflicted during the year, it was almost entirely from Democrat schemes.  That’s why it’s so utterly delightful to watch Biden’s spokesman, TJ Ducklo, squirm, duck, and bob when Bret Baier asks him whether Biden relies on a teleprompter to get through interviews.

It wasn’t until I sat down to write this post that I realized how the Democrats are responsible for much of the misery that’s rained down upon us in 2020.  It started with the impeachment.  When the impeachment began, Republicans were not happy.  By the time it ended, Democrats were miserable.  That was a breakeven, but it was also a harbinger for a rotten year.

The Wuhan virus was most definitely the fault of the Chinese Communist Party, which lied to the world about the disease, using its puppets in the World Health Organization.  Had China’s government been honest, the rest of the world would have been better equipped to guard against a disease that proved to be deadly for the elderly and people with severe co-morbidities.

Initially, the American people were willing to sign on to a vast societal experiment: a 15-day lockdown to slow the spread of the disease, which would allow health facilities all over America to prepare for a possible onslaught.  That would also give the federal government time to do what Trump, in fact, did: mobilize the private sector to produce the masks, ventilators, medicine, and other supplies necessary for Americans to deal with the disease.  As we say at Passover, Dayenu!  (It would have been enough.)

But for the Democrats, it wasn’t enough.  Instead, they saw a wonderful vista spread before them: a ruined economy that would wipe out Trump’s chances of re-election.  Who cared if people’s life savings were wiped out, if clinical depression and drug and alcohol abuse ran rampant through society, if suicides increased, if treatable diseases went untreated, if spousal and child abuse rocketed, if divorces multiplied, and if businesses were destroyed?  Beating Trump was worth it.  And so we suffered.

And for the Democrats, that still wasn’t enough.  They used the excuse of a violent ex-felon’s overdose-related death to justify mass protests across American cities.  When Black Lives Matter, the ideological arm of the New Democrat Party, met up with Antifa, the military arm of the New Democrat Party, the misery multiplied as riots and looting spread from city to city.

Minneapolis suffered half a billion dollars in damages, with much of the wreckage in black communities, and may take decades to recover.  Tiny Kenosha, Wisconsin suffered $50 million in damages when a violent accused rapist was shot after fighting with police and appearing to reach for a weapon to use against them.  Portland and Seattle have daily battles going on between police and paramilitary mobs.  Chicago’s been through the looting wringer twice now.

There’s some humor to be found in the fact that spoiled elite white kids destroy $100,000’s worth of property in New York.  Even more amusingly, these products of American higher education are too uneducated to realize that their chi-chi rebel name, “New Afrikan Black Panther Party,” echoes the word “Afrikaner.”  It was an Afrikaner minority party that was responsible for South African apartheid from 1948 to 1991.

However, the best humor, to date, comes from watching a Biden spokesman on the hot seat.  To fully appreciate how funny Bret Baier’s interview is, you have to watch some videos showing Biden visibly struggling to read from teleprompters during interviews:

Joe Biden reads from a teleprompter at almost all of his events… and he can barely do that sometimes. pic.twitter.com/DZBRwCpk19

Those videos are simultaneously funny, sad (because mental decline with age is always sad), and scary (because this is the Democrat party’s presidential candidate).

For pure, unadulterated humor, though, watch Biden’s spokesman wiggle around and, in the end, basically accuse Bret Baier of being fake news, all so he can avoid acknowledging Biden’s teleprompter addiction: