COVID Crackdowns and Vaccine Concerns on the Rise

At a press conference on Wednesday, Boris Johnson announced new COVID-19 restrictions that will make it illegal for people in England to meet in groups of more than six people, either indoors or outdoors, starting September 14.

The sudden pronouncement came just as children around the country returned to school and the government launched an advertising campaign urging workers to return to their offices.

Mr. Johnson explained the new laws did not signify a return to full lockdown, and he granted exceptions to schools, workplaces, weddings, and funerals as well as organized team sports. But workers will find it hard to get to their offices and factories, as the restrictions will apply on public transport.

The laws will be backed up with fines of £100, doubling for each subsequent offense up to a maximum of £3,200.

The prime minister also announced the creation of a force of COVID marshals “to boost the local enforcement capacity.” Initially, the wardens will not have the powers to issue those fines, but that could change.

The strong steps that Johnson is taking in the name of fighting the COVID disease are deeply troubling to many conservative commentators. After watching the prime minister’s press conference, James Delingpole scathingly wrote on Breitbart, “Who exactly is that dishevelled oaf on the rostrum issuing all these fascistic ordinances?”

So far the British public has supported the government’s measures. And, according to the market research company YouGov, around two-thirds of those surveyed after the Wednesday press conference would support the government even if it imposed a house curfew.

Yet there is strong evidence to suggest that the rise in infections that led to this latest infringement of people’s liberties might not be as bad as it is being portrayed.

The BBC noted there are now 80 percent more tests in the UK than there were in June. And the April test figures, which current numbers are being compared to, were taken inside hospitals and care homes, not the wider population. So the real number of infections would have been much higher.

According to the London School of Hygiene and Tropical Medicine, there may have been 100,000 cases a day at the end of March.

When more people are tested, more infections get picked up, but this doesn’t necessarily mean that infection numbers are increasing. Significantly, COVID hospital admissions and fatalities in the UK remain at very low levels. 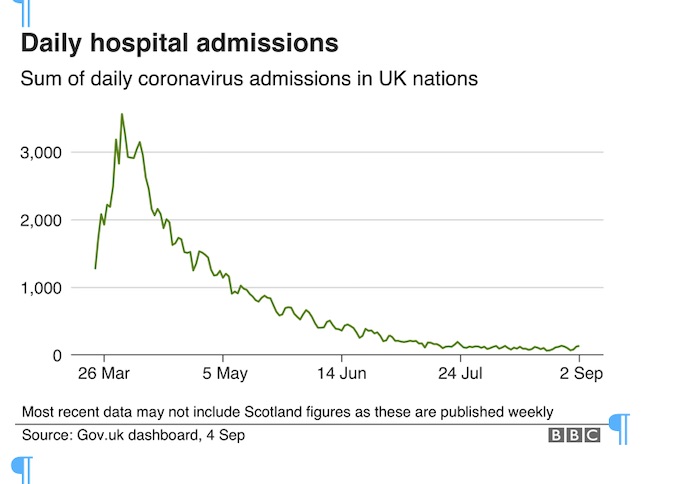 With fear of the disease now widespread, the only way nations will return to normality any time soon is either if COVID-19 proves to be not as overwhelming as first thought — and the authorities are willing to admit that — or through the introduction of a vaccination program.

President Trump announced during his Monday press conference that a vaccine in the U.S. for COVID-19 is imminent and could be available before the November 3 election date. The timing inevitably attracted accusations that he is pushing its release forward for political advantage.

One reason why Americans could be the first to have a vaccine available is that drug companies know that they cannot be sued under U.S. law if people develop harmful, even fatal side effects.

In 2011, the Supreme Court ruled in favor of the National Childhood Vaccine Injury Act of 1986, which stated that, when it comes to vaccines, the U.S. government (taxpayers) and not the pharmaceutical company has to pay any damage claims.

The Atlantic reported in May 2019 that “every year the government pays hundreds of millions of dollars to people who claim they’ve been injured by vaccines.” It cites the flu vaccine as “the most dangerous vaccine in the U.S., based on settled cases for injuries.”

Bill Gates, the multi-billionaire who has invested heavily in controversial vaccine programs around the world, told the BBC earlier this year, “Governments will have to decide if they will indemnify the companies and really go out with this, when we just don’t have the time to do what we normally do.” Yet Sweden has recent and painful memories of vaccines going wrong.

Between 2009 and 2010 it instituted a vaccination program against Swine Flu (H1N1), which resulted in a sharp increase in its cases of narcolepsy, a central nervous system disorder characterized by excessive daytime sleepiness.

The vaccine used in Sweden was called Pandemrix, and it included an adjuvant called AS03 to increase the body’s immune response. It was manufactured by GlaxoSmithKline (GSK), in Germany, although not used there or in the USA.

Studies since carried out by the CDC and others have so far failed to prove a conclusive link, but GSK has stopped using that product, and the 118 children who developed the life-altering disease received compensation. Although initially small, at $7,340 each, it signified an acceptance of responsibility.

The public outcry from its population over that vaccine may have been a contributing factor in Sweden’s decision not to go into lockdown over COVID-19 in favor of allowing herd immunity to grow within its population.

For those hoping to soon be able to inject a quick cure, there has been a vaccine for seasonal flu since 1945, yet according to the World Health Organization it still claims between 290,000 and 650,000 lives a year.