Political expression at the NFL opener, by players and fans 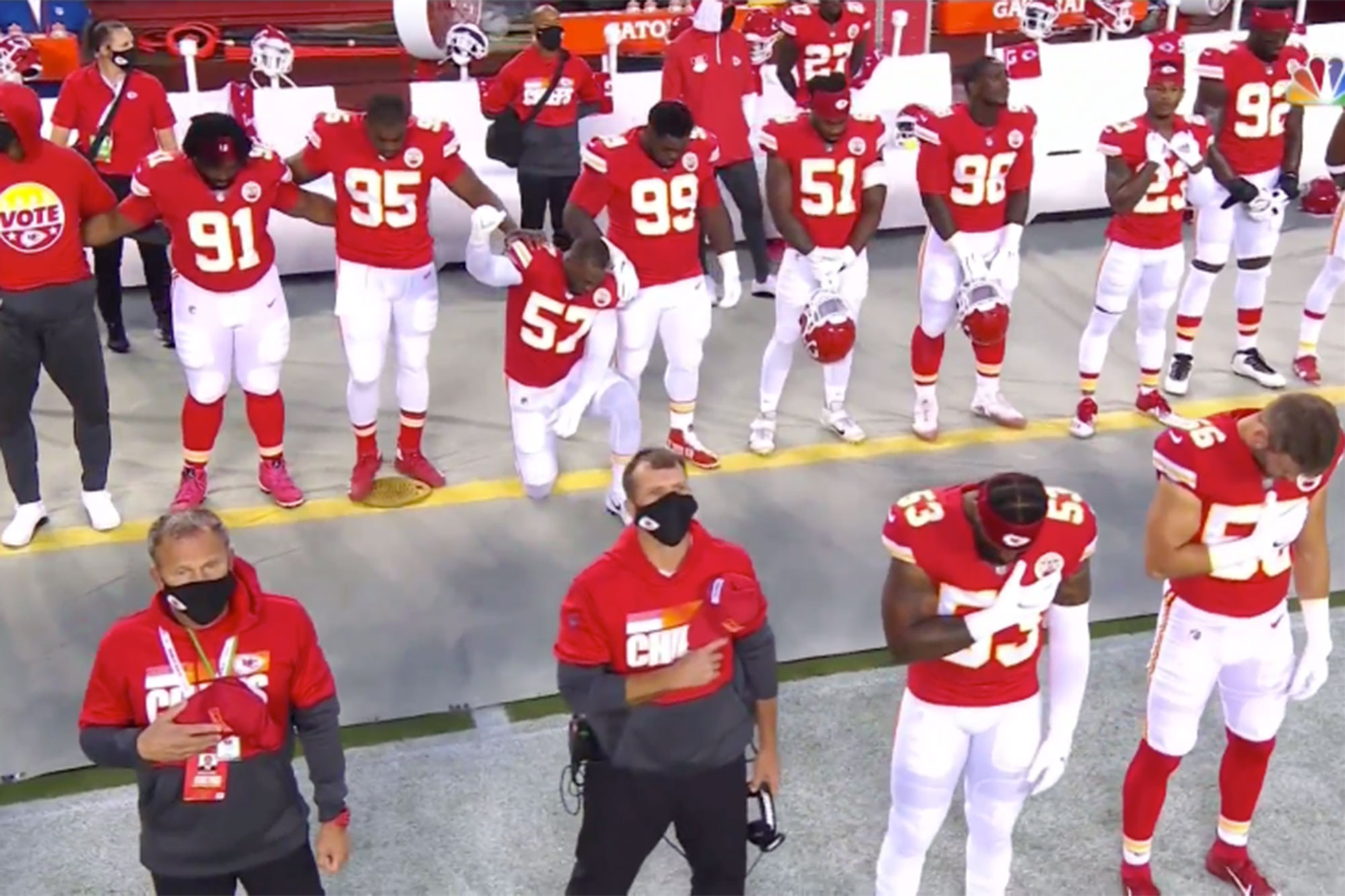 I didn’t watch the NFL’s opening game last night between Kansas City and Houston. However, I’ve read several accounts about the players’ approach to the National Anthem and related activity.

Apparently, the NFL decided to play both the National Anthem and a song called “Lift Every Voice and Sing,” which is sometimes referred to as the black national anthem. The idea of a black national anthem should be offensive to all but racial separatists. As long as we’re one country, we should have just one anthem, and it should be the only one played at sports events.

The Houston Texans stayed in their locker room during both anthems, which apparently were played at different times. In theory, I’m fine with that.

NBC’s sideline reporter Michele Tafoya reported that the reason players stayed in the locker room was to avoid “misinterpretation” about celebrating one song and not the other. I’m not sure what this means, but it sounds like some players wanted to “celebrate” only one of the two songs. I assume that some black players didn’t want to celebrate the National Anthem. (Conceivably, some white players didn’t want to celebrate the other song.)

As for “misinterpretation,” this probably refers to the claim that refusing to stand during the National Anthem isn’t an expression of lack of pride in our country. But that’s exactly how it should be interpreted.

The Kansas City Chiefs didn’t stay in their locker room. Reportedly, they locked arms during the playing of “Lift Every Voice and Sing and the accompanying video. I don’t know what the video showed. The players headed inside after that, leaving to a smattering of boos from the small crowd.

Afterwards, they returned to the field for the National Anthem. Defensive end Alex Okafor was the only player who took a knee. Some Chiefs, including quarterback Patrick Mahomes, locked arms.

As I have said since the beginning of these controversies, I think players should be allowed take a knee when the anthem is played. But given the circumstances, I’m glad that only one Kansas City player decided to do it.

Matters didn’t end with the playing of the (real) anthem. Afterwards, the two teams gathered at midfield for a “moment of unity.” Again, there was booing from the Arrowhead Stadium crowd.

J.J. Watt, the Texans white megastar, was taken aback by the boos. “I don’t fully understand that,” he said. “There was no flag involved, there was nothing involved other than two teams coming together to show unity.”

I certainly wouldn’t have booed the players, but I think I understand the booing. What does “unity” mean in this context? It isn’t unity in respect and love for America. The Texans approach to the National Anthem tells us that.

What, then, are the players suddenly “united” about? The view that there’s some sort of national crisis because police officers sometimes use deadly force, and on rare occasions unjustifiably, against black criminals? The view that mistreatment of Blacks is prevalent (or “systemic”) in America? These views may be right or they may be wrong, but they are political views.

The booing means that some fans are sick of players displaying anything but their athletic skills during game time and just before. Players should have the right to try to do so, at least before the games starts, but fans have a right to show the players what they think of it.

The booing showed that. It probably presages a decline in NFL viewership if the players keep expressing themselves about the state of America.