“Second wave” is a misnomer in Israel’s case, actually, since they never really had a first wave. Cases topped out at fewer than 650 per day back in the spring, when the U.S. and most of Europe were drowning. Then they began to decline, to the point where Israelis decided in May to fling open the doors of their schools and invite students back — masked up and with classroom windows open for maximum ventilation, of course. But then a heat wave struck. Parents complained that it was oppressive to make kids wear masks under the circumstances. Israeli authorities relented and gave them a four-day break where they could take their masks off and turn on the classroom A/C instead.

The country recorded more than 4,400 cases yesterday. They’ve been north of 1,000 nearly every day since the beginning of July. Netanyahu and his cabinet have searched for solutions in lieu of a new lockdown to try to slow the spread, to no avail.

They’re the first developed country on Earth to order a second lockdown, per Bloomberg. And the backlash may take Netanyahu’s government down.

An inner cabinet of ministers late Thursday approved a two-week, full-fledged lockdown, to be followed by two more weeks of strict limits on movement and economic activity. After that, if the situation improves, restrictions would be applied only to communities with large outbreaks. The plan is subject to the final approval of the full cabinet on Sunday and faces opposition from some ministers…

Dissatisfaction with Netanyahu’s handling of the outbreak, high unemployment and the corruption allegations against the long-time prime minister have come together in a storm of discontent that’s taken shape in mass weekly protests against him…

Just last week, Netanyahu tried to lock down selected communities with the highest infection rates, but was forced to retreat amid strong opposition from ultra-Orthodox Jewish lawmakers. Large gatherings for life-cycle milestones and for religious study have fostered the virus’s spread, centered mainly in ultra-Orthodox and Arab areas of the country.

Some ultra-Orthodox legislators are threatening to quit his government if he goes ahead with a lockdown during Israel’s holiday season, which starts next Friday. The good news is that the country is still seeing very few deaths from its rising case counts, with 23 recorded yesterday. The bad news is that’s the second-highest number of daily deaths they’ve recorded since the start of the pandemic. And deaths are a lagging indicator: Typically they don’t begin to spike until three or four weeks after confirmed cases begin spiking. That’s probably what has Netanyahu and his cabinet poised to act — they know the news is about to get worse, not better, short-term.

The true second wave is happening in Europe. In no particular order, Spain… 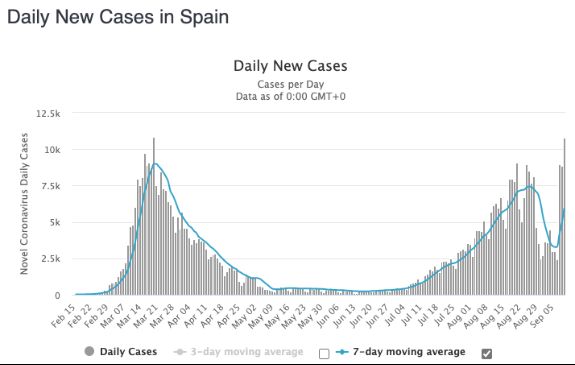 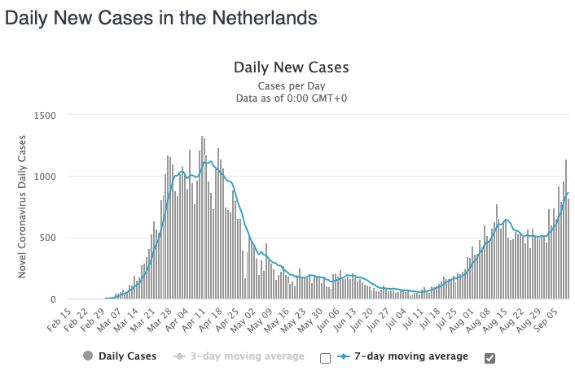 …the UK, where the virus is back to doubling at a rate of every week or so and which has now banned all gatherings of more than six people to try to control the spread… 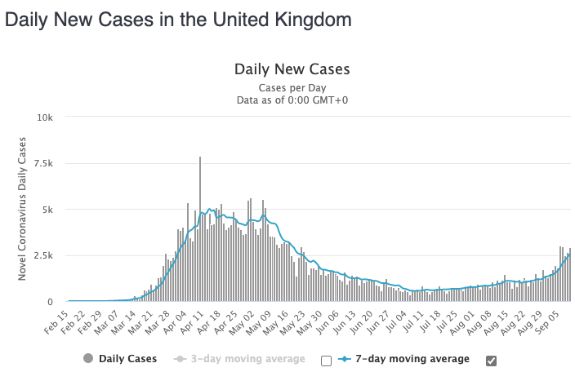 …and France, which is now seeing more daily confirmed cases than during its brutal stretch this past spring and more hospitalizations than it’s seen in a month: 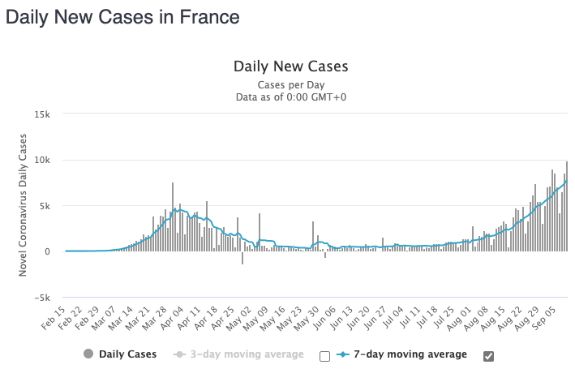 The important footnote in all of these outbreaks is that daily deaths — so far — are a tiny fraction of what they were during the worst of it back in March and April. The UK and France easily topped more than a thousand deaths per day during the hardest stretches this spring. Yesterday they recorded 14 and 19 deaths, respectively. (Click the links above and scroll down to see the death curves for each country.) How come? Is the death spike on its way, again as part of the “lagging indicator” phenomenon? Maybe not. Australia’s ABC notes that many of these new infections involve younger people, who are less likely to need hospital treatment. That means brighter outcomes right now — but it also raises the possibility of a much bigger second wave to come as the virus jumps from young adults to older ones.

There’s also the fact that testing has greatly expanded everywhere since spring, which means the graphs above are really an apples-to-oranges comparison. Does France really have more infections now than it had in March or did, say, 90 percent of infections in March end up going undetected due to the lack of comprehensive testing? Improved testing now means countries are picking up more asymptomatic cases, which may explain how case counts are soaring while deaths are hovering near zero.

And of course there’s the fact that doctors have better treatment regimens for COVID patients now than they did before. If you went to the ICU in March, you probably weren’t coming out. If you go there today, you’ll get a course of steroids that might end up pulling you back from the brink.

Anyway. Why, specifically, is Europe experiencing a second wave? Why has New York City’s positivity rate been south of one percent for months now while cases are booming in similarly hard-hit European cities? A Harvard scientist argues that it comes down to three things. More testing in New York to sniff out cases before they seed outbreaks; more contact tracing in New York to get people to isolate before they transmit the virus unknowingly; annnnnnd New York’s obstinate insistence on keeping bars and restaurants closed for indoor service.

That translates into 6000 contract tracers in New York and 2000 in Madrid.

Madrid had about 200 contact tracers in July (maybe 700 now). An order of magnitude difference.

Let’s focus on indoor dining, a vital economic activity in both #NewYork and #Madrid, and arguably one of the main sources of transmission of the #coronavirus.

10/
Indoor dining in Madrid was OPEN at 60% capacity in June.

Since June it has been easy to find crowded bars and tables. The contrast with NY was striking as anyone spending time in both places can tell you.

12/
A colleague asked whether New York may have reached “herd immunity” whereas Madrid has not. That’d explain the low number of cases in NY.

Unlikely. Based on the available seroprevalence studies, both places had a similar % of population who developed antibodies to #SARSCOV2.

All of the countries now experiencing second waves reopened indoor dining awhile back. Relatedly, a new CDC study found that people who test positive are twice as likely to have eaten at a restaurant in the two weeks before their diagnosis than others. Maybe we shouldn’t read too much into that, as it seems likely that someone willing to dine out right now is also willing to engage in other risky behaviors. They may be getting infected via those other behaviors, not from sitting in a semi-crowded dining room. But the CDC finding and the New York/Madrid comparison raises a question: With all of these warning signs about the risk of indoor dining at restaurants, why should NYC go ahead with its plan to reopen them? “Because people who work in the food industry need to make a living!” you say. Right, but if New York experiences a second wave and the public comes to conclude that the CDC is correct about indoor dining being the culprit, that’s going to destroy consumer demand for those restaurants anyway.

Essentially, New York’s gambling its public health on the idea that indoor dining can be done safely after all, despite all available evidence to the contrary.

There is a little good news from Europe today. Germany opened its schools a month ago and has yet to experience a truly nasty second-wave outbreak. The catch is that Germany had community spread under control before it did so whereas we, ah, don’t. Exit quotation from a German doctor: “The important thing is you have to keep the number in the community low. This is where the United States will have problems.”