President Donald Trump questioned the apparent improved ability of Democrat presidential nominee Joe Biden to speak coherently, raising the possibility of the 77-year-old former vice president being given drugs to enhance his speaking ability. Trump made the comment during a taped interview with Fox News Channel host Judge Jeanine Pirro set to be broadcast Saturday night. A clip of the interview was shown Friday on Fox’s Outnumbered Overtime. 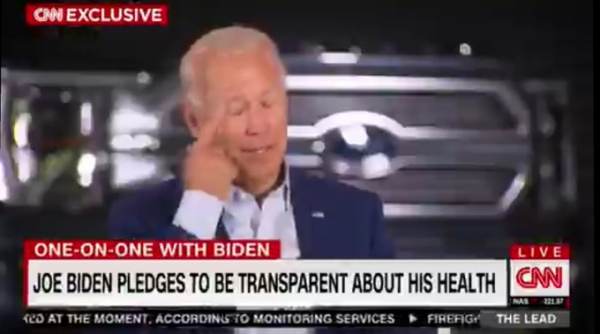 Trump said, “There’s probably, uh, possibly drugs involved, that’s what I hear. I mean there’s possibly drugs. I don’t know how you can go from being so bad when you can’t even get out a sentence. I mean, you saw some of those debates with the large number of people on the stage. He was, I mean, I used to say, ‘How is it possible that he can even go forward?’

While Biden appears to have improved since earlier this year, he still has moments where he forgets what he is trying to say or reads Teleprompter queues as part of his prepared remarks. There is also speculation, based on his behavior during remote Q&A sessions that Biden is reading answers typed on a Teleprompter.

This is amazing. Joe Biden is so out of it that he ACTUALLY read “topline message” off the teleprompter. He really is just a puppet for his handlers who tell him what to say. He’s like Ron Burgundy in Anchorman, he’ll read ANYTHING they put in the prompter.pic.twitter.com/eY7uyiRVYk

Biden spokesman T.J. Ducklo refused to answer a question about that posed by Fox’s Bret Baier on Thursday.

Has Joe Biden ever used a teleprompter during a TV interview?

TJ Ducklo refused to answer and instead had a meltdown. Disaster of an interview for the Biden campaign. pic.twitter.com/OEyi2eb31L

In an interview Thursday with CNN’s Jake Tapper in which Biden tried to defend his health compared to Trump, Biden lost his train of thought again.

TAPPER: One last question for you, sir.

If you’re elected, you would be the oldest president ever. And I know you have said it’s fair for anybody to ask questions about anybody over 70 and their health.

The American people have been lied to before by presidents about the president’s health, FDR, JFK, Ronald Reagan. We don’t know still what happened with Donald Trump and his visit to Walter Reed last year.

Will you pledge that, if you’re elected, you will be transparent about your health…

TAPPER: … all facets of your health, with urgency, so that we know…

That’s what I did. I laid out my health records in more detail, pages and pages of it, when I became vice president. I laid it all out, everything, my entire background relating to my health.

I have laid out my health records in terms of this time around and the investigations in my health made when I was in the — at Walter Reed, in terms of — by Walter Reed docs, by my docs right now. And, thank God, I am in good health.

And when it comes to Donald Trump vs. me, just look at us, OK? Just look at us. Who seems to be in shape? Who’s able to move around? Who is — I mean this idea of, you know, slow Joe.

BIDEN: I — anyway, I shouldn’t laugh about it, because — anyway, Donald Trump — just look at us both, watch us, and determine whether or not you think I’m misleading anyone, not you, personally, but the public.

Look at me. Judge me based on — I know what the job takes. I have sat for hundreds of hours in the Situation Room. For eight years, I was vice president, on every major decision. I know how difficult the job is.

And one more thing I will do, I will take responsibility. I will acknowledge my mistakes when I make them. And I will level with the American people.

TAPPER: Thanks for your time, Mr. Vice President. Appreciate it.