A dam has broken and our media are desperate to avert our eyes from it.  I am stunned at the succession of positive developments that has followed the announcement almost a month ago that the United Arab Emirates is normalizing relations with Israel. Momentum is accelerating toward the long dreamed-of goal of peace between Israel and its Arab neighbors.

I have to pinch myself after writing such a thing to remind myself that decade after decade of strenuous effort has failed, frustrating presidents of both parties and stymieing plan after plan put forth by diplomats and NGOs. Yet, improbable as it may seem to the smart set, Donald Trump, denounced as an imminent threat to world peace by almost all the academic, diplomatic, and journalistic elites, may have triggered the process of reconciling the Arab world to peaceful coexistence with Israel. 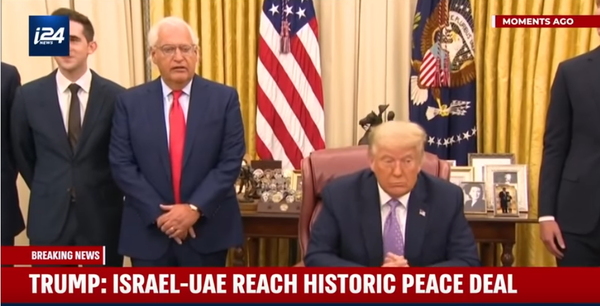 Among the good news announced just this week:

The New Arab, a London-based, Qatari-funded private media outlet, reported over the weekend that Abdul Rahman al-Sudais used his sermon to emphasize tolerance and cooperation between Muslims and non-Muslims.

These developments and others to come are best understood as a “preference cascade.”

The concept of the Preference Cascade is credited to Turkish economist Timur Kuran. Glenn Reynolds described the idea in a 2002 op-ed, Patriotism and Preferences

In short, average people behave the way they think they ought to, even though that behavior might not reflect their own personal feelings.
Given a sufficient “A-HA!” moment when they discover that their personal feelings are shared by a large portion of the population their behavior may change dramatically. An example of this is the British colonists before and after publication of Thomas Paine’s Common Sense. A year before the Declaration of Independence, America was full of patriotic British convinced that things could be worked out with King George, but on July 4, 1776 the colonies were full of Americans determined that they needed independence.

President Trump has already accomplished a miracle. If he is re-elected, the miracle of Middle East peace may well be among his historic achievements.