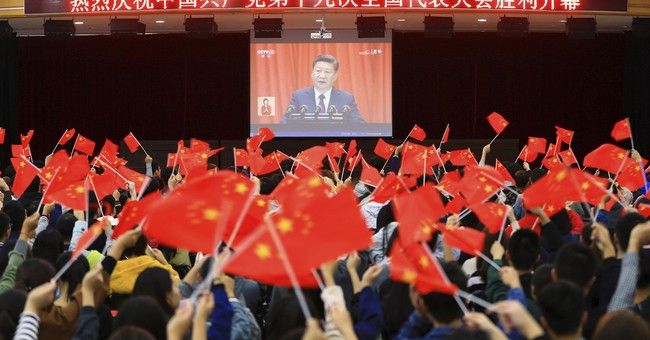 It’s a drop in the bucket but it’s a start. The State Department announced Wednesday that the visas of more than 1,000 Chinese students and academics have been revoked.

At the end of May, President Trump issued Presidential Proclamation 10043. The proclamation states that China “is engaged in a wide‑ranging and heavily resourced campaign to acquire sensitive United States technologies and intellectual property, in part to bolster the modernization and capability of its military, the People’s Liberation Army.” It went into effect as of June 1, 2020. The program is aimed at Chinese graduate students and researchers suspected of ties to the Chinese military.

It’s about time. The State Department says that by revoking the visas it “safeguards US national security by limiting the PRC’s ability to leverage Chinese graduate students and researchers in the United States to steal United States technologies, intellectual property, and information to develop advanced military capabilities.”

Speaking Wednesday, acting US Secretary of Homeland Security Chad Wolf said that “China has leveraged every aspect of its country including its economy, its military, and its diplomatic power, demonstrating a rejection of western liberal democracy and continually renewing its commitment to remake the world order in its own authoritarian image.”

As recently as August 25, I wrote about this problem. Chinese nationals receive visas to come and study or do research at American universities but fail to disclose their ties to the Chinese military or Communist Chinese government. They are found to be in violation of visa disclosure requirements and likely stealing intellectual property or medical research on behalf of the Chinese government. On August 29, I wrote a similar story, and on July 23, John wrote this story. There is clearly a problem and it is good to see some results being reported.

The State Department admits this is only “a small subset of the total number of Chinese students and scholars coming to the United States.” Fair enough. There are about 369,000 students studying in the U.S., though many of them have had their studies disrupted by the coronavirus pandemic. “We continue to welcome legitimate students and scholars from China who do not further the Chinese Communist Party’s goals of military dominance.” China is the largest source of international college students in the United States. American universities and colleges make a lot of money off international students.

When the president made this decision, effective June 1, the Chinese response at the time was that it “resolutely opposes” the move and “strongly condemns any calculated politicization and stigmatization of normal academic exchanges.” I think Americans “strongly condemn” the Communist Chinese stealing American intellectual property and medical research for their own benefit, particularly as it relates to the Chinese military, who wish to use it against America. Let’s not forget that in July, the State Department ordered the closure of China’s consulate in Houston. China retaliated by closing the US mission in Chengdu. Both the U.S. and China have new restrictions on journalists and diplomats.

Some Chinese students say that this is all a mistake – they have only ever attended high schools loosely affiliated with the People’s Liberation Army. Uh-huh. Is there such a thing as a “loose” affiliation with the army in China? Today China’s foreign ministry spokesman Zhao Lijian called this action racial discrimination and a violation of the students’ human rights. Bold move, China. Accusing the United States of human rights violations takes some chutzpah coming from the brutal dictatorship of Communist China.

Reuters estimates that Chinese students in the U.S. generate $14 billion in economic activity. American universities rely on tuition fees from Chinese students, which will only increase given the financial woes of higher education thanks to the coronavirus pandemic. The irony that the virus originated in China doesn’t escape us.

Foreign Policy editor James Palmer says this is likely “a blunder” was made by the administration through incompetence. No surprise from that publication.

Chinese students with only tenuous links to military-affiliated universities have shared their education information on a Google Drive spreadsheet as part of a claim that they were wrongly targeted. Foreign Policy editor James Palmer suggested that the information from the spreadsheet suggests that American officials blundered in targeting any Chinese institution with a military-sounding name, tweeting: “It’s possible that this is a *deliberate* move as part of an attempt to seriously reduce Chinese students numbers. But it’s also quite likely sheer incompetence from officials just told to look for X set of names who don’t recognize the difference.”

for instance, several went to 西工大附中 – ‘the middle school attached to Northwestern Polytechnic University.’ NPU is on the entities list, but this school (which is a combined middle/high school, like most) has an essentially historical connection to it.

It’s possible that this is a *deliberate* move as part of an attempt to seriously reduce Chinese students numbers. But it’s also quite likely sheer incompetence from officials just told to look for X set of names who don’t recognize the difference.

Well, at least he didn’t just come right out and accuse the Trump administration of xenophobia as other Democrats do when the president is acting to protect America’s best interests. Joe Biden called Trump a xenophobe when he stopped incoming travelers from China to mitigate the coronavirus pandemic, you remember.

As I said, it’s a start. There is likely much more work to be done to weed out the spies.