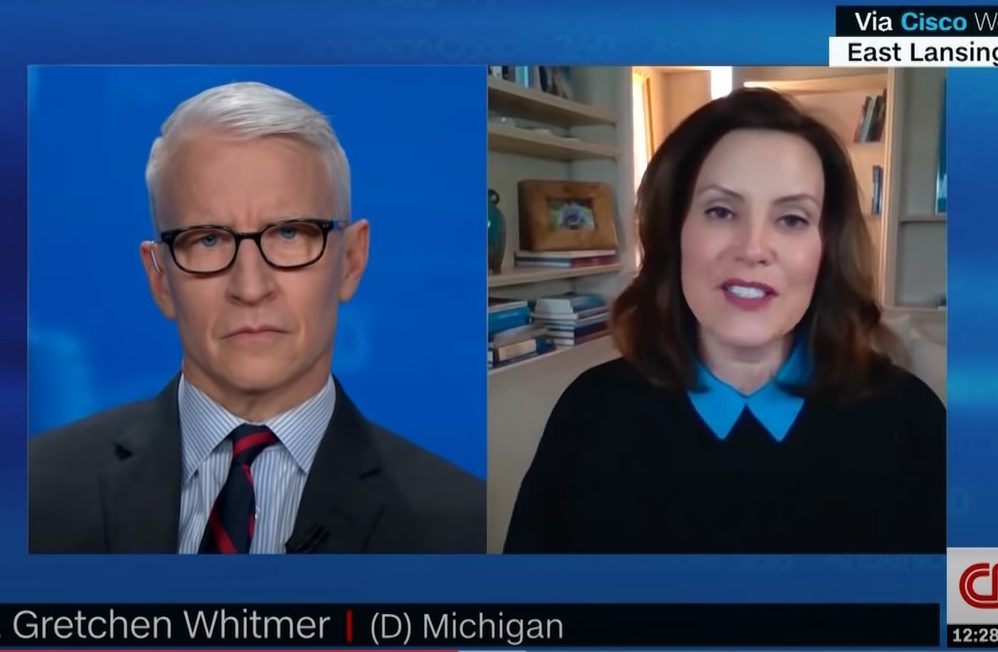 “It’s distressing,” Whitmer told CNN’s Anderson Cooper of Trump’s upcoming rally, going on to outline Michigan’s rules on mass gatherings that require masks in order to steer clear of super-spreader events. “We anticipate that he will be descending on this state and perhaps encouraging people to come maskless … I would love to see the leader of our country embrace masks and encourage people to do the right thing.”

When it came to Biden however, Gretchen offered no such concerns, even after wrongly accusing the Trump campaign of discouraging mask use.

According to Michigan Live, which offered on-the-ground coverage of the Trump event, “campaign staff handed out masks and hand sanitizer at the Thursday rally. Attendees had temperature checks performed before entering the venue, but people who attended were notified they could be exposing themselves to risk of infection.”

“We’ve got Joe Biden coming into town tomorrow. I know that they are scrupulously following the science. They want to keep their supporters and the general public safe,” said Whitmer. “I want to do everything I can to keep the people of this state safe.”

“The big question people are gonna ask is ‘are you better off today than you were 4 years ago?'”
she says. “…For the working class in this state… the answer is unequivocally ‘no.'” pic.twitter.com/HwrkECsdxo

The apparent absence of masks and adherence to social distancing have been a primary target of criticism from reporters covering the campaign events, even as the same self-righteous journalists excused the very same conduct by the mass protests for social justice that they actively cheered.

Hmm… @Acosta has no commentary on DC protests but complains about Michigan peaceful protests… 🤨 pic.twitter.com/VlRh81bANM

Earlier this week for example, The Hill attempted to indict the absence of masks from a Trump rally in North Carolina by using a photo featuring every supporter in the background sporting face coverings. Rather than correcting the story, the outlet merely swapped the photo.

“Hey this photo disproves our false narrative. What do we do?”

“Delete that tweet and choose a photo that doesn’t show the crowd!” pic.twitter.com/mLTscqiifL

Trump has openly mocked Democrats and legacy media for openly celebrating the mass protests sweeping the country while condemning gatherings they didn’t like, such as the president’s campaign events.

“We decided to call our rallies ‘Peaceful Protests,’” Trump told a roaring audience in Winston-Salem.

The campaign has begun to distribute “peaceful protestor” signs at events.

Signs at Trump’s New Hampshire rally that read “peaceful protestor” and “this is a peaceful protest” appear to be made by the president’s campaign. pic.twitter.com/2GGWVOYufq