Michigan Rally Crowd to Trump: “We Love You!”

RUSH: Here it is last night. This was in Freeland, Michigan, during the president’s rally, and here it is. This is the bond that Donald Trump has — and I have told you about this bond from the first rally. I recognized it. 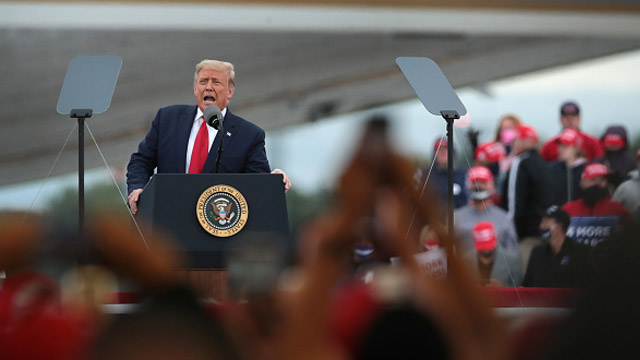 I recognized this was a special candidate, a special campaign, when I saw this, because I had been there. I’d done it myself. I had done the Rush to Excellence Tour. I had seen rallies like this. I had seen connections, bonds between audience and performer, host, whatever. I knew that Trump had a special connection with the people who supported him and who were gonna vote for him, and here he is last night in Freeland, Michigan, during his rally.

THE PRESIDENT: Where do these people come from? But we’re all set to go in, they heard we were going in — we informed them we’re going in — and they sent their police to do it, and we never even had to go in. But we can solve those problems in a matter of literally minutes.

THE PRESIDENT: Thank you.

THE PRESIDENT: Don’t say that. I’ll start to cry, and that wouldn’t be good for my image.

THE PRESIDENT: You don’t want to see me cry. I’ll start to cry.

RUSH: Sincerity. Donald Trump exuding sincerity. Donald Trump exuding humility last night. That chant, that came out of nowhere. What he was talking about was the destruction taking place in Democrat cities like Portland, Seattle, Minneapolis. He said, “Where’d these people come from?” The Antifa times, the Black Lives Matter, all these people, “Where’d they come from?”

“They heard we were going in,” meaning they heard federal troops were coming. “We informed ’em we’re going in. They sent their police to do it. We never had to go in. The local police did the job. But we can solve these problems in a matter of minutes.” And that’s when the crowd wanted to show their appreciation, and that’s what they’re doing — and you other politicians? You want to see appreciation? You want appreciation? Watch Donald Trump. He is appreciated by the people that vote for him.

Because everybody wants to be part of something larger than themselves, particularly mature people who know that there are things larger than themselves. You want to be part of organizations like this, and you want to matter. This is what people who attend a Trump rally end up saying. They have almost an inner glow of happiness and relevance because they’re part of something that they know is good and decent.

A vote for Republicans is a vote for safe communities, great jobs, and a limitless future for ALL Americans. Instead of letting Washington change us, despite all that we have been through, we are changing Washington! #MAGA pic.twitter.com/5dlHJaMMhP

So here’s this picture. Thousands of people inside and outside the hangar where Trump’s rally was last night, and Trump tweets the picture, and he tweets this. “A vote for Republicans is a vote for safe communities, great jobs, and a limitless future for ALL Americans. Instead of letting Washington change us, despite all that we have been through, we are changing Washington!”

I love that line ’cause it is so true, and that’s the line that his daughter Ivanka popularized during her introduction of Trump at his acceptance speech on the South Lawn of the White House during the week of the Republican convention. That’s it, in a nutshell. Most people go to Washington, and it changes ’em — and you’ve seen it.

How many times have you voted for candidates promising do X, Y, and Z and you believe ’em — and then they get to town, and all of a sudden they don’t implement anything they promised? I mean, they don’t even get close. It’s ’cause Washington changes them. Look at Donald Trump. He got to Washington, and he has implemented more than he promised.

He’s implemented all of his promises and then some, and he is changing Washington — and that is what they can’t stand. They literally can’t. The swamp, the establishment, the deep state, they can’t stand that Trump is succeeding in changing their domain.

RUSH: Here is a story from the Washington Examiner. The headline: “Trump Has the Momentum as Biden Looks Rattled,” and it’s true. If you watched the Trump rally last night, if you watched that rally, you would have no doubt where the momentum is. There is no way that Donald Trump is on the losing side, not watching that last night.

That’s not behavior of a loser. It is not a rally conducted by somebody who thinks he’s gonna lose. It was incredible. It was a wonderful rally. It was something that everybody there was grateful to be a part of, and it’s the same damn thing as four years ago. There is no way Biden could do one of these, just as there was no way Hillary Clinton could do one of these.

Hillary Clinton couldn’t draw flies. Joe Biden doesn’t even try. The biggest crowd for a Joe Biden appearance is five, and those are members of the media sitting in circles six feet or 12 feet apart from each other. It’s comical when you see Joe Biden’s doing a press conference or whatever. It’s five members of the media — and do you know what? 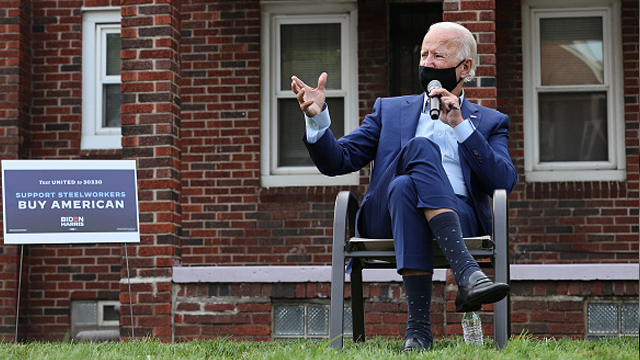 Do you know what else, folks? Joe Biden’s responses to media questions are on the teleprompter. He’s actually seen telling people running his teleprompter to “speed it up,” because the answer is displaying too slow. So his spokesman was on Special Report with Bret Baier last night, and Bret Baier asked the spokesman.

He simply was asking a question about Biden, and whether or not he’s reading answers on the teleprompter, and the spokesman would not say. The point is, Biden could not do one of these rallies, and there is no such momentum with Biden. The momentum that Biden has is simply because there is a D next to his name.