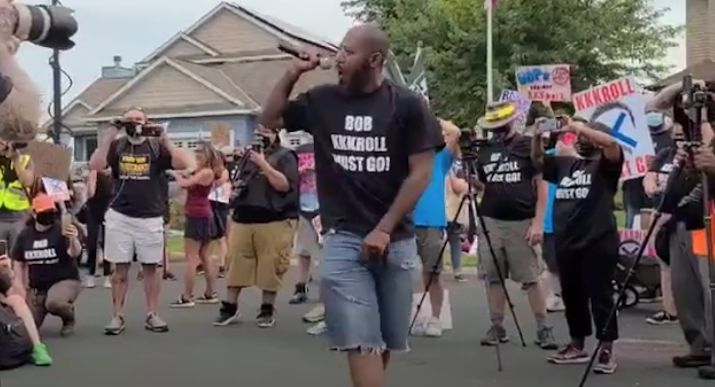 A long tradition of bipartisan engagement for police in Minnesota may come crashing to an end, and the DFL has no one to blame but itself for it. It didn’t start with the riots in Minneapolis, but rather with a protest launched by DFL-endorsed state House candidate John Thompson’s protest outside of police union head Bob Kroll’s house last month.

In the protest, Thompson accused Kroll of being a Klansman and his fellow protesters beat piñata effigies of Kroll and his wife — with lots of media watching. The Strib covered it as a “Republicans pounce!” story, but here’s a taste of the action from our friends at Alpha News ( a very, very NSFW taste, mind you):

Minnesota Republican leaders are criticizing as “reprehensible” a Black Lives Matter protest where a Minnesota House candidate shouted expletives within earshot of neighbors and children.

More than 100 people congregated outside Minneapolis police union president Bob Kroll’s home in Hugo, where he lives with his wife, WCCO reporter Liz Collin. The rally on Saturday came as part of an effort calling for both Kroll and Collin to be fired from their jobs.

Two videos circulating on Twitter show John Thompson, a DFL activist who last week won his primary for House District 67A in St. Paul, wearing a shirt reading “Bob KKKroll Must Go!” and shouting into a microphone to the group of protesters, with neighbors and children nearby. One clip shows him saying “You think we give a [expletive] about burning Hugo down?” In another, he says “[Expletive] Hugo.” Activists also smashed piñata effigies of the pair and took a knee before dispersing.

As the video shows, Thompson accused Kroll of being a Grand Wizard, screamed at Kroll’s neighbors, and generally comported himself as a horse’s ass for the cameras. Thompson later apologized and the DFL issued a statement lightly scolding Thompson, but police throughout the state were not amused — and the story didn’t go away. Earlier this week, the DFL had to “indefinitely postpone” a planned fundraiser when they picked Thompson to take part in it, a decision that prompted a protest from the state’s police association:

Minnesota House Democrats indefinitely postponed a fundraiser featuring a dozen DFL candidates after an influential law enforcement group voiced concerns about including a St. Paul Democrat whose actions and statements at a protest in Hugo sparked backlash.

The head of the Minnesota Police and Peace Officers Association (MPPOA), in a letter to House Speaker Melissa Hortman, expressed “deep frustration” that John Thompson, an activist running for a St. Paul House seat, was invited to participate in the fundraiser. …

“This is violent and outrageous behavior — and not just rhetoric — specifically against a police officer and his family,” MPPOA Executive Director Brian Peters wrote. “Anyone — including candidates for office — that supports Thompson’s candidacy to the [Minnesota House of Representatives] cannot be considered a supporter of law enforcement.”

Hortman canceled the fundraiser but continued to support Thompson. In response, the MPPOA rescinded their endorsements of several DFL legislative candidates, switching them to their Republican opponents instead. That was a direct result of the silence of those candidates over Thompson’s actions, the MPPOA executive director declared:

A powerful statewide police group is pulling its endorsements of several Democratic state legislators, marking the latest turn in a deepening political rift over a DFL-endorsed candidate’s conduct at a rally outside Minneapolis Police Federation President Bob Kroll’s home.

The Minnesota Police and Peace Officers Association (MPPOA) board voted this week to back Republican challengers to Democratic incumbents in at least two potentially competitive seats, according to social media posts from the GOP candidates. The association, which represents more than 10,000 law enforcement members across the state, previously expressed support for DFL candidates in both races. …

Peters confirmed late Thursday that his board reversed course on several DFL endorsements, including those publicized by the GOP, but declined to share the full list for publication. He said members wanted to see Democrats deliver stronger condemnation of Thompson, who he said crossed a line by targeting Kroll’s wife.

“The endorsements that we rescinded, my issue was those candidates did not stand up to their leadership and put pressure on and ask why are we supporting a candidate who did this in Hugo,” he said. “If this is the future of the Democratic Party, my organization is going to support elsewhere.”

That is a shot fired across the bow by Minnesota law enforcement, a warning that they will not sit quietly while Democrats use them as strawmen for their political campaigning. They have seen enough of that already this summer, with Democrats and progressives using a very broad brush to paint all police as racists and abusers. Until now, the MPPOA and police in general have been more or less non-partisan, or at least bipartisan, as the MPPOA’s track record on endorsements shows.

The state Republican Party doesn’t mind that a bit:

“We applaud The Minnesota Police and Peace Officers Association for rescinding their endorsement of several Democrat legislators. The DFL did nothing more than pay lip service to law enforcement after DFL House candidate John Thompson showed up at a police officer’s house and threatened to ignite the town of Hugo. The fact that Democrat Speaker of the House Melissa Hortman would hold a fundraiser for John Thompson shows how insincere the DFL’s condemnation of him was. We are glad the MPPOA saw through it.

“It’s important to remember the sacrifices made by members of the law enforcement community, especially today.

“There is a clear choice this November: the Democrats tolerate and tacitly encourage the violence and mayhem that is plaguing America’s cities and the Republican Party, all the way up to President Trump, respect the rule of law. On Election Day, voters will pick peace and prosperity over chaos and mayhem.”

Thompson will likely win his seat, but Republicans will have their ads cut to run in lots of other districts between now and Election Day. That law-and-order messaging will be made all the more effective with the sound of Thompson’s profane rants, including “F**k Hugo, Minnesota!” That’s the choice that Democrats have left with voters, and why police associations will be likely lining up against them from Hugo to Hatteras in November.